Posted May 12, 2017 by meezcarrie in historical, nonfiction, Penrose Halson / 8 Comments 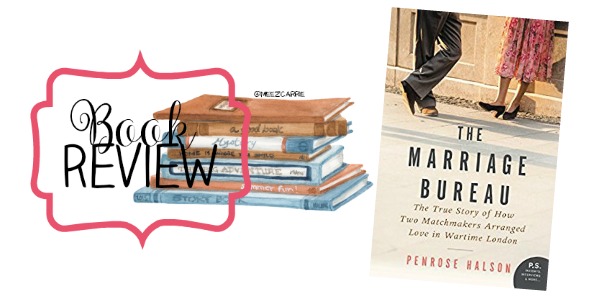 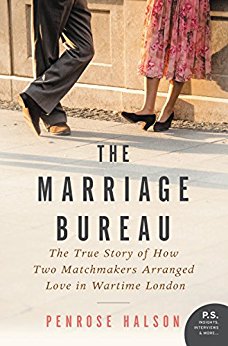 A riveting glimpse of life and love during and after World War II—a heart-warming, touching, and thoroughly absorbing true story of a world gone by.

In the spring of 1939, with the Second World War looming, two determined twenty-four-year-olds, Heather Jenner and Mary Oliver, decided to open a marriage bureau. They found a tiny office on London’s Bond Street and set about the delicate business of matchmaking. Drawing on the bureau’s extensive archives, Penrose Halson—who many years later found herself the proprietor of the bureau—tells their story, and those of their clients.

From shop girls to debutantes; widowers to war veterans, clients came in search of security, social acceptance, or simply love. And thanks to the meticulous organization and astute intuition of the Bureau’s matchmakers, most found what they were looking for.

Penrose Halson draws from newspaper and magazine articles, advertisements, and interviews with the proprietors themselves to bring the romance and heartbreak of matchmaking during wartime to vivid, often hilarious, life in this unforgettable story of a most unusual business.

“A book full of charm and hilarity.”—Country Life

When I first heard about The Marriage Bureau by Penrose Halson, I was immediately drawn to the concept and to the cover. As a fan of mail order bride/marriage of convenience stories, a true account of a couple of friends who decide to start a matchmaking service during WW2 London sounded right up my alley!

It’s written in a light style which really feels like a novel most of the time, a trait that both adds to the enjoyment and takes away at the same time. On the one hand, it’s easy reading. Nothing too heavy. Perfect for a beach read on your upcoming summer vacation, even if it is a nonfiction book. On the other hand, there’s not a lot of historical depth. Maybe I just had a different idea in mind of what the book was going to be about, but I lost interest in the biographical-novel feel fairly quickly.

Bottom Line: The premise of The Marriage Bureau is so fascinating – a look at what amounted to the roots, really, of modern dating sites and matchmaking services. The stories of the matches are charming with dashes of humor, but I felt too much time was spent telling us what Heather and Mary and Picot’s personalities were like instead of showing us (which the style of the book opened me up to expect). However, overall, this is definitely worth a read especially if you love mail-order-bride stories, WW2 history, and happily ever afters.

When Penrose was 25 and still unmarried, her mother sent her to the Katharine Allen Marriage & Advice Bureau.  Twenty years later, after a career in teaching, writing and editing, she and her management consultant husband Bill bought the Bureau.  They also acquired The Marriage Bureau, which had been set up in 1939 by two 24-year-olds.  As Bill had predicted, matchmaking suited Penrose down to the ground, and they remain happily in touch with many former clients who visit them in London.

8 responses to “Book Review: The Marriage Bureau by Penrose Halson”