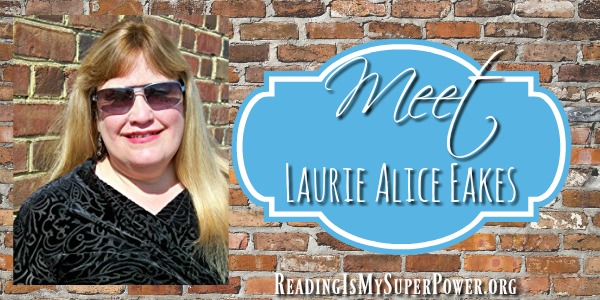 It is always a pleasure to chat with Laurie Alice Eakes, and today you get to eavesdrop!

“Eakes has a charming way of making her novels come to life without being over the top,” writes Romantic Times of  bestselling, award-winning author Laurie Alice Eakes. As a child, Eakes began to tell herself stories. Since then, she has fulfilled her dream of becoming a published author, with more than two dozen books in print. Accolades for Eakes’s books including winning the National Readers Choice Award and Rita finalist status.

She has recently relocated to a cold climate because she is weird enough to like snow and icy lake water. When she isn’t basking in the glory of being cold, she likes to read, visit museums, and take long walks, preferably with her husband, though the cats make her feel guilty every time she leaves the house. 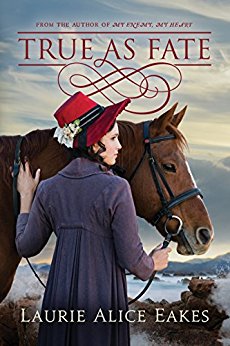 Lady Chloe Ashford detests going to balls, loathes social pretense, and finds the very idea of hunting for a husband obscene. But she has an even more scandalous secret: she once helped an American—the enemy—escape from Dartmoor Prison. Now, nearly three years later, Ross Trenerry is back—and in trouble again. So is her traitorous heart. He doesn’t know she’s the one responsible for sending him to a second prison, and she has no intention of telling him.

A former privateer, Ross has finally run out of his legendary luck. Only one woman lies between him and freedom. He desperately needs Chloe’s help to prove he hasn’t committed treason, but he’s distracted by the passion that flares between them.

They set out on a cross-country adventure together to prove Ross’s innocence, but peril soon dogs their heels. As they race to reach their appointed rendezvous on time, they must fight their growing attraction and focus on discovering who is behind this deadly plot. Will they finally admit their love and put the pieces together before it’s too late?

Hi Alice! Welcome back to the blog! As you know, I start all of my guests out with a fast four:

Alice: Chocolate mousse cake—Because I love the flavors and different textures, especially the creaminess of the mousse filling.


Carrie: I love desserts with a combination of textures – and temperatures. I love a yummy chocolate lava cake where you have all the warm gooey center contrasting with the cold ice cream!

Alice: Hyacinth—Because I love purple and I love their smell. Plus they come out in spring, which signals the end of winter.


Carrie: Any naturally purple flower becomes my fave and I love hyacinths!

Alice:  Fourth of July—I like fireworks and ice cream, water melon and hotdogs—at least Chicago-style—and it’s summer. Plus it reminds me of the risk our forbearers took in signing the Declaration of Independence.


Carrie: I never appreciated the significance of the 4th of July as I should have until I taught a citizenship class and the enormity of what they risked and sacrificed really hit me.

Alice: I can’t answer this one. I love all kinds of music, so favorite song depends on my mood. Probably something like “I am the Highway” by the late Chris Cornell, but that probably shocks my readers—that I like more contemporary rock music.


Carrie: I can totally see that about you!

Alice: Writing. Or maybe being a cat whisperer, though my husband is better at that than I am.


Carrie: My dog Zuzu says to go with the writing superpower. She says being a cat whisperer is nothing to aspire to 😉


Alice: A Study in Scarlet Women by Sherry Thomas; The Girl from Venice by Martin Cruz Smith; Here I Go Again by Jenn Lancaster; The Secret Thoughts of Successful Women—I read a lot and lots of them are excellent, but these are the ones that stand out.


Carrie: They all sound great!

Characters often find themselves in situations they aren’t sure they can get themselves out of. When was the last time you found yourself in a situation that was hard to get out of and what did you do?

Alice: I was taking my laundry to the cleaners and then going on to the gym after, so got a Lyft. The driver was unable to communicate because, I learned later, he was deaf. He passed the cleaners, which is only two blocks from my house. I tried to tell him he had passed it. He just kept going. The streets are busy around here and he was driving quickly, not speeding, but keeping up with traffic. He went around about six blocks and got on the right street again—and passed the cleaners again.

By this time, I, being the suspense writer that I am, was kind of freaking out. I was having all sorts of wild thoughts. I mean, the guy had GPS. I could hear it on his phone giving him directions, so couldn’t figure out what in the world he was doing.

Finally, he had to stop at a stop sign on a fairly quiet street, so I got out in the middle of the street, scurried to the sidewalk, and took off in the opposite direction. Fortunately, I knew where I was.

I put this down to incompetence on his part, not malice, and Lyft refunded my money, but—well, it was kind of scary being trapped in a car with someone who was . . . not with it.


Carrie: Oh. My. Goodness. The suspense READER in me would have been freaking out too lol.


Between Chloe and Ross – the main characters in True as Fate – who are you most like?


Alice: I am definitely most like Chloe—bossy, micro-managing, impulsive. . . Definitely one to say, “It seemed like a good idea at the time.”

Carrie: haha! I have a couple of friends like that …. doesn’t resemble me at all. 😉


We first met Chloe and Ross in My Enemy, My Heart. Did you know back then how their story would play out or did they surprise you at all along the way?


Alice:  Well, I actually wrote True as Fate first. It was my thesis novel for when I got my master’s degree in writing popular fiction.


What do you most want readers to take away from True as Fate?

Alice: If you want to love and be loved, if you do not want to be lonely in your life, you need to forgive those who hurt you.


Carrie: Such an important truth!

Alice: I am working on the third Ashford story—Remember, My Love. This is Juliet’s story.

Laurie Alice Eakes is giving away a Kindle version of My Enemy, My Heart and a copy of True as Fate in Kindle, Paperback, or audio – winner’s choice – to one of my readers. Open internationally, except where prohibited by law, but international winner will only receive Kindle or audio copies. This giveaway is subject to Reading Is My SuperPower’s giveaway policies which can be found here. Enter via the Rafflecopter form below.


What about you? When was the last time YOU found yourself in a situation that was hard to get out of and what did you do?

55 responses to “Author Interview (and a Giveaway!): Laurie Alice Eakes”