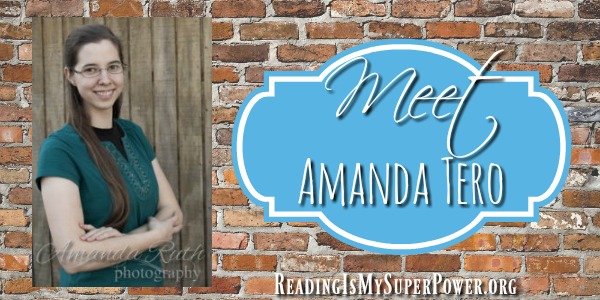 Amanda Tero is a homeschool graduate who desires to provide God-honoring, family-friendly reading material. She has enjoyed writing since before ten years old, but it has only been since 2013 that she began seriously pursuing writing again – starting with some short stories that she wrote for her sisters as a gift. Her mom encouraged her to try selling the stories she published, and since then, she has begun actively writing short stories, novellas, and novels.

If something she has written draws an individual into a deeper relationship with Jesus Christ, it is worth it! 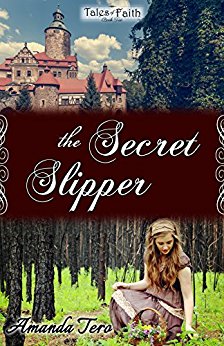 Her new book, The Secret Slipper, is a Cinderella story with a twist!


Being a cripple is only the beginning of Lia’s troubles. It seems as if Bioti’s goal in life is to make Lia as miserable as possible. If Lia’s purpose was to be a slave, then why did God make her a cripple? How can He make something beautiful out of her deformity?

Raoul never questioned the death of his daughter until someone reports her whereabouts. If Ellia is still alive, how has she survived these ten years with her deformity? When Raoul doesn’t know who to trust, can he trust God to keep Ellia safe when evidence reveals Bioti’s dangerous character?

As time brings more hindrances, will Raoul find Ellia, or will she forever be lost to the father she doesn’t even know is searching for her?

Also available to read for free with Kindle Unlimited

Get a 30-Day Free Trial when you sign up for Kindle Unlimited!

Hi Amanda! I’m delighted to chat with you today 🙂 I start all of my guests out with a fast four:


Carrie: I’m allergic to oranges, so between the two of us, we could share a fruit bowl 🙂

Amanda: Usually cats. I’m not a huge animal fan, and the cats we’ve had around are less annoying than dogs. 😉


Carrie: Hmmm… we’ll agree to disagree on that one 😉

Amanda: I enjoy both, but I usually gravitate toward coffee. I guess my grandma slipping some coffee in my sippy-cup at toddlerhood has affected my preference. 🙂 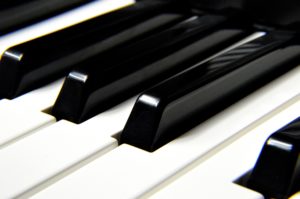 Amanda: Haha! Wow…um…piano would be my superpower (or would that be music?)


Amanda:  Bargain bin! I don’t know that I have ever paid full price for a book. Once I’m done talking myself out of spending money there (I’m not a spender unless it’s a smashing deal), I will peruse the Christian fiction and historical/research shelves.


Carrie: I *have* paid full price for a book (more than I want to admit to except under oath) but a bargain bin or used bookstore is always fun too 🙂

Amanda: I change between three places: my desk in my music studio (I teach piano/violin), downstairs in the family rooms (our dining room/living room are connected), or outside on the swing. It’s interesting how the brain will work differently in different places. Sometimes I need absolute quiet, other times I can write with people milling around.


Describe your main characters and tell me who you would cast in their roles if Hollywood wanted to produce The Secret Slipper as a movie!

Amanda: Raoul (Lord Kiralyn) is an ambitious, tender-hearted man who, once he gets his focus on something has a hard time seeing things differently. As for casting, I’ve never seen Henry Cavill act, but he’s who I picture Raoul looking like.

Lia is a hurting lass who is basically used as a slave by Bioti, her supposed step-mother; she longs to prove that though she is crippled, she is able to pull her load of work. And another actor I’ve never seen but view Lia as is Alison Lohman.


What surprised you about The Secret Slipper or your characters as you wrote their story?


Amanda: “The Secret Slipper” definitely took a pretty big twist from what I was first anticipating. I can’t spill too much information cause I’m not into spoilers. 😉 I was surprised at how many secrets ended up in “Slipper” as well as a certain character’s demise.

As for my characters, I would say that Raoul surprised me most. Initially, I didn’t like his part, but it just needed a lot of work. Once I figured out his story, his ended up being a character that I love—headstrong, caring, yet proud.


What do you most want readers to take away from The Secret Slipper?

Amanda: There are two main themes/lessons in “The Secret Slipper.” Raoul learns about trusting in the Lord and what all that may entail, Lia learns how God has made her perfectly—even in her deformity. I would love readers to embrace both of those truths: complete trust in our creator God, Who knows best for us.


Carrie: Such important truth and yet trust is so difficult for us at times, isn’t it?


Thank you so much for taking time to talk with me, my friend! 🙂 Before we say goodbye for today, tell us what‘s coming up next for you.

Amanda: Thank you so much for having me! I have enjoyed it! What’s coming next? God tends to throw curve-balls around my plans, but unless He changes my route, I’m working on a Civil War novel, Journey of Choice. It is about a New York orphan whose life has changed completely against his will. In all of this, does he learn to take responsibility for the choices that he can control? 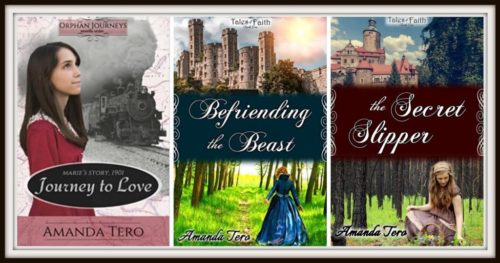 To celebrate her tour, Amanda is giving away a grand prize of paperback copies of Amanda’s three novellas: Journey to Love, Befriending the Beast, and The Secret Slipper. Click below to enter. Be sure to comment on this post before you enter to claim 9 extra entries!

This giveaway is hosted by Celebrate Lit. Follow along with the tour for more chances to win!

What about you? Do you prefer quiet while you’re reading/writing or do you like having people around?

34 responses to “Author Interview (and a Giveaway!): Amanda Tero”