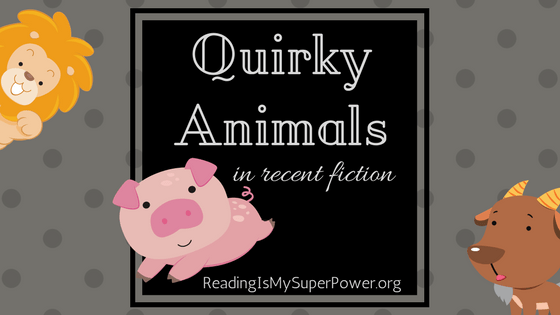 Today on Top Ten Tuesday, I decided to talk about some of the quirkiest animals in fiction! (Thanks to my dear friends who brainstormed with me when I got stuck lol) Zuzu has called dibs on doing her own Top Ten Tuesday in the future – a post about (yep, you guessed it) her fave DOGS in fiction. But for today we aren’t limiting ourselves to solely canine quirksters.

Not since Wilbur (Charlotte’s Web) have I met a pig I loved so much in fiction!
In A MATCH OF WITS, Jen Turano gives life to this adorable swine and lets her delightfully steal the show

Don’t let that sweet name fool you.
Victoria Bylin’s Ladybug the goat in SOMEONE LIKE YOU is a reprobate of the highest order.
A resort terrorizer. A phone eater. A wedding crasher. LOL.

In FETCHING SWEETNESS, Dana Mentink introduces us to this quirky, endearing, slobbery mess of a dog who eats pancakes and chews on spatulas and rescues the wounded and abandoned.
Sweetness steals the show. And a few kisses. And a whole lot of laughter.

It takes a lot for me to like fowl of any sort – fictional or otherwise. (especially otherwise)
But in SECURING THE HANDYMAN’S HEART, Katie Clark gives Maxwell his own personality and – yeah i’ll admit it – it’s endearing.

Charlie Lionheart has my heart. We all know this. But his interactions with his lions – oh, please tell me I’m not the only one that grinned like a fool. Playful, loyal, smart. These lions are his brothers, in many ways. And Joanne Bischof gives them great personality and lovable hearts in THE LADY AND THE LIONHEART.

Poor Ginger gets a bad rap as ‘the ugliest dog’ in Janet Ferguson’s Southern Hearts series, but her clumsy exuberance is completely endearing. She’s an adorably hot mess, and that’s why I love her!

Only Jen Turano could create a ‘guard goat’ and infuse him with hilarious personality – along with a moat, a pack of rascally dogs, a cannon, and yes even pitchforks. Hijinx abound in PLAYING THE PART, and Geoffrey is right at the center of it all.

I truly believe no cat has been loved more fiercely than Mr. Darcy, the hairless cat of Elinor Bosarge from Janet Ferguson’s BLOWN TOGETHER. Mr. Darcy is the source of much humor as poor Sam tries to get used to him, but be careful – Mr. Darcy will creep into your heart when you’re not looking!

Hawk, the rookie K-9, stole every scene he was in during Dana Mentink’s SEEK AND FIND. And even some scenes he wasn’t in. Yanking whoever happens to be holding his leash wherever he wants them to go. Always on the prowl for any food left within easy access. Or something to chew on. He’s not overly picky.

“Having a duck drop on her head was something straight out of one of her nightmares.” And with those words, we are introduced to Gabby – an adorable show-stealing duck. I never thought that a duck would end up being one of my favorite characters. But, considering this is a Jen Turano book, I really should have known. 😉

Those are a few of my faves – but I know there are more out there! What about you? What are some of your favorite quirky animals in recent fiction?