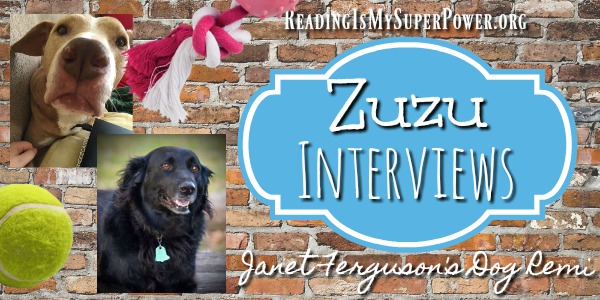 It’s been a while since I’ve chatted with you, but that’s because Mom has been glued to the computer lately and I haven’t had any time to borrow it.

But today, I’m back! 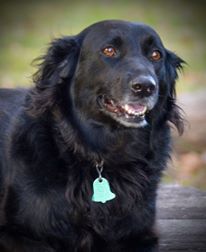 And I get to talk with Janet Ferguson’s beautiful dog Remi.

Remi is a Labra-Labra-doodle. Several parts black lab and some poodle makes for a very smart dog who (after a brief stint at PetSmart training school) is well behaved. She performs tricks, like dancing, for the right treat! She’s sweet to other pets and people, but squirrels best run fast!

Her mom, Janet W. Ferguson, grew up in Mississippi and received a degree in Banking and Finance from the University of Mississippi. She has served as a children’s minister and a church youth volunteer. An avid reader, she worked as a librarian at a large public high school. She writes humorous inspirational fiction for people with real lives and real problems. Janet and her husband have two grown children, one really smart dog (that would be Remi), and a few cats that allow them to share the space.

Mom and I love Janet’s books – in fact, I think Mom talked about them just yesterday in her Quirky Animals post. A post, by the way, she let me have NO SAY in. Whatever. I’ll just take over some Top Ten Tuesday and show her how it’s done. (Hint: Dogs. All dogs. None of this naked cat business. Good grief.) 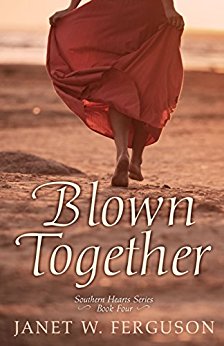 When love storms in…

Wealth manager Sam Conrad is accustomed to his domineering father ordering him around, especially at the bank where they both work. But when his father demands that Sam manage the inheritance of his bossy ex-fiancée, Sam has finally had enough. He leaves in search of a new life, and attorney Big Roy Bosarge from Mobile, Alabama, agrees to mentor Sam on his quest for direction. Sam didn’t expect to be thrown together with Big Roy’s eccentric and opinionated daughter.

Storm damage forces lonely romance writer Elinor Bosarge and her hairless cat, Mr. Darcy, out of her Fort Morgan Beach cottage. She plans to take refuge in the boathouse on her parents’ estate, but finds the place already occupied by one of her father’s “projects.” She’s shocked her father would allow another young man onto the property after his last mentee robbed her family and broke her heart. And from the moment she meets Sam Conrad, they disagree about everything from her cat to how to best renovate a local nursing home.

Between her mother’s health issues and the hurricane brewing in the Gulf, Elinor feels like her life is being ripped apart. It doesn’t help that she’s falling for the man she’s determined not to trust. Sam finds himself drawn to Elinor, wanting to help her and this new family he’s grown to love. But can he overcome the barrier she’s built to keep him out? When the storm rages and the two of them are blown together, can Elinor find the faith to open her heart again?

Hi, Remi! Welcome to my blog! Or my Mom’s blog… (I’m only saying that in case she checks this before posting it. We all know it’s really my little section of the internet. I just humor her.) 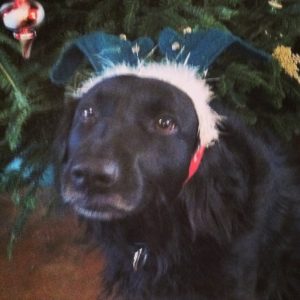 Remi: Bones. Chew toys are for pups. I’m an older generation dog, and I prefer Dentastix for the health of my teeth. Well, actually I prefer to ride to the store with Dad and get a beef jerky, but, sadly, that doesn’t happen every day. They still humiliate me occasionally and make me dance for my treats.

Zuzu: I know, right? Why do they do that? Would THEY want to dance for their favorite snacks? Or wear antlers? I think not.


Remi: If I had to pick, I’d say tennis ball, but I’m not much into retrieving. It is fun to watch the humans retrieve them, though.

Zuzu: I’m a pointer, not a retriever. Yet they still keep throwing that ball…


Remi: Squirrels. The pesky things are everywhere, just taunting me. I give them a good run for their money, though.

Zuzu: Agreed. In fact, I wouldn’t mind one right now! 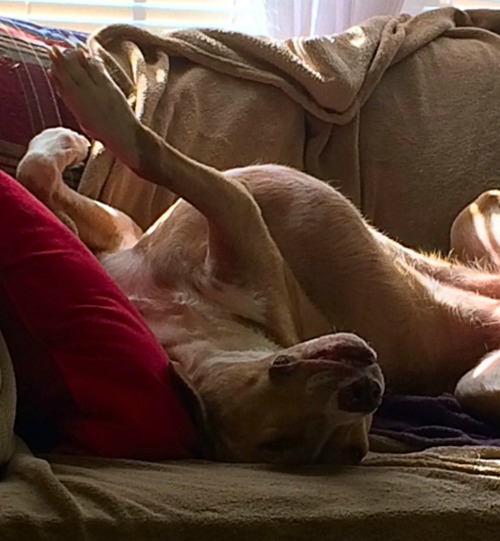 Mom says that reading is her superpower and sleeping is mine. If YOU and YOUR MOM had superpowers, what would they be? 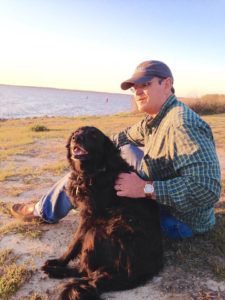 Remi: Walking every day and noticing God’s glorious creation is our superpower. Just hearing a bird song, spotting and sniffing flowers, and enjoying the sunshine is such a blessing!

Zuzu: I love to do that too! Mom doesn’t ‘do’ the outdoors though, so Dad and I go exploring without her.


I recently heard this Colonial American Proverb – You will always be lucky if you know how to make friends with strange cats. What are your thoughts on this controversial statement?

Remi: Like I have a choice? I could speak for hours on this controversy, but my fate is sealed. The strange creatures have been a part of my existence since my adoption as a young pup. Up to five of the felines have lived here at once, but some have gone, and we’re down to still two. One oddball tried to suck my toes, until she moved in with my human sister. Another swishes her fur against mine, begging to be licked. It’s so creepy and awkward to be caught in that situation. The other prima donna here hisses and swats at me every time I casually pass her on the way to the kitchen. I often have to break up fights between those two. As you can see, I have much to say on the issue, but I best end here. 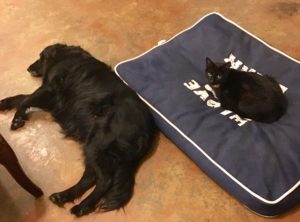 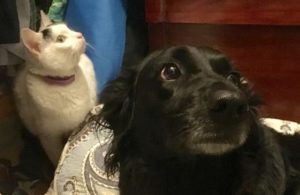 Zuzu: You’re a true hero, Remi. Not many dogs would be as accommodating. Including yours truly.


Your mom writes books. My mom reads books. If you were going to write a book, what would you call it & what would it be about?

Remi: That’s easy: Dogs Should Be Fed from the Human Table. The end.

Zuzu: oooo! Could I get an autographed copy? To leave around the house. Like in Mom’s ‘read ASAP’ bin.


Speaking of writing books, tell us about your mom’s Southern Hearts series. Which character is your favorite across all four books?

Remi: Judiciously, these books all have animal appearances. Of course, I will not be picking a feline, especially that hairless cat in Blown Together, talk about prima donna. So I will chose between the three canines. Gingie from Leaving Oxford is a rather clumsy animal. Dashwood’s part in Blown Together is rather small. But Mimi from Going Up South has true class, so I’d go with her. She’s a standard poodle, and I do have poodle blood in my heritage along with a good bit of black Lab.

Zuzu: Yeah. What is up with that hairless cat?? Gingie is my fave 🙂 Bless her heart. 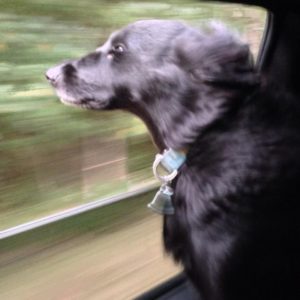 What does a typical day look like for you as an author’s dog?

Remi: Never the same. Some days we are moving from room to room around the house while my master wanders haphazardly from one unfinished project to another. Some days I lay for hours while she edits. Until that glorious hour each evening when we walk. It’s a good life.

Zuzu: It sounds like a good life … even with the cats 😉


Remi, thanks for taking time out from cat wrangling and Mom-following to talk with me! Before we say goodbye for today, tell us what‘s coming up next for you and your mom.


Remi: Thank you for having me, Zuzu! I hear Mom is working on a novel called Magnolia Storms, set in Ocean Springs, Mississippi, that will come out later this year. I reminded her to add a dog to this novel just in time. The story deals with the emotional aftermath of Hurricane Katrina after over a decade. It’s an emotional journey. Did you know many pets were lost in that natural disaster? I think it’s an important story.

Zuzu: Those statistics always break my heart. I stick a little closer to Mom and Dad when I’m reminded about it. Which is why I’m currently trying to convince Mom that there’s room in that recliner for me too!

Winner’s Choice of one!

Remi’s mom is giving away an ecopy of any ONE of the books in her Southern Hearts Series – winner’s choice between Leaving Oxford, Going Up South, Tackling the Fields, or Blown Together. Enter via the Rafflecopter form below. Open internationally. Void where prohibited. Giveaway is subject to Reading Is My SuperPower’s giveaway policies.


What about you? What kind of dog do you think Janet Ferguson should write about next? (Hint: if you’re stuck, ‘Zuzu’ is always a good answer.) 😉