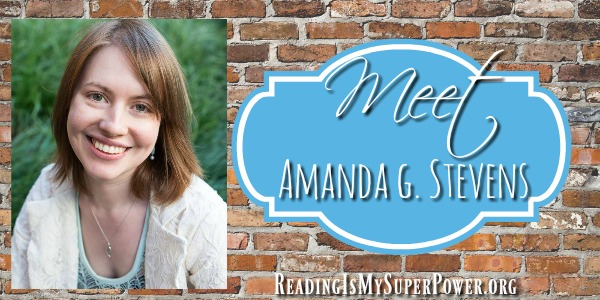 Happy Wednesday, my friends 🙂 Please join me in welcoming Amanda G. Stevens to the blog today!

As a child, Amanda G. Stevens disparaged Mary Poppins and Stuart Little because they could never happen. Now she writes speculative fiction. She is the author of the Haven Seekers series, and her debut Seek and Hide was a 2015 INSPY Award finalist. She lives in Michigan and loves trade paperbacks, folk music, the Golden Era of Hollywood, and white cheddar popcorn.

Amanda is the author of the Haven Seekers series, “a four-part series of dystopian novels set in a world where Christianity has been outlawed.”

Hi Amanda! Welcome to the blog!

Amanda: Gala apples are my favorite, especially with a spoonful of sunflower seed butter. I’ll eat an orange, but only if I can remove all the pith first.


Carrie: … and by then you could have eaten 5 apples 😉

Amanda: Summer. I have the thermostat of a reptile, and I live in Michigan. Plus I love the vibrancy of nature, so winter’s barrenness, though necessary to the cycle of things, is always a bit dismal.


Carrie: I love winter, but there’s something so special about spring, isn’t there? When color is restored to the world.

Amanda: I don’t own either, but I’m more of a dog person (and I’m allergic to cats, so they’re not an option regardless). I was raised with dogs; my parents currently have the world’s most affectionate Boxer.


Carrie: Our Vizsla-Boxer “velcro dog” might challenge your parents’ dog in that department! haha!

Amanda: I don’t like tea at all, but I also don’t like coffee as such. My favored caffeine drink is an iced frappe, e.g. Panera’s frozen caramel drink.

Carrie: I’m not a fan of either… either. lol.

Amanda: Overanalyzing. You laugh because you haven’t seen the inner corridors of my thought process. It has its strengths and its weaknesses.

Amanda: Great Expectations, just read for the first time and loved it. I never knew Dickens was so funny. Or so moving. I’ve just begun David Copperfield and it’s making me laugh too, and I love the way he captures the mind and moods of a child.

Many Sparrows by Lori Benton, in which I fell most in love with two of the secondary characters only to discover they have their own book. I cannot wait to get to The Pursuit of Tamsen Littlejohn now that I know this.

Call the Midwife, the memoir on which the BBC TV show is based. It’s endearing, frank (sometimes joltingly so), and has an unexpected transcendence to it, especially to the way the author chose to end it.


Carrie: Oh good! A friend just gave me a beautiful copy of Great Expectations and this makes me even more excited to read it! And Many Sparrows… YES. She writes so exquisitely.


Amanda: That depends on the character. From Haven Seekers, Marcus would say I’m fair and trustworthy. Lee would say I’m harsh and I could have done more to protect certain people she loves. From my new book too, there are the more trusting characters and the more suspicious characters. They’d probably all call me pushy, since I have to keep writing even when they don’t want to talk. And they’d probably all call me ruthless but mean the word in different ways.


Q: In your Haven Seekers series, the government has taken control of the church. What inspired you to write these books in this setting?

Amanda: I have to blame the characters for this. Marcus and Lee came to me first, sans any kind of plot or setting. I tried to determine what sort of story would best unearth the layers of who they are as individuals, and they seemed to need some sort of covert battle to fight. I dismissed the possibility of writing a historical (I’d rather make it all up than get a fact wrong), which left me with the need to create my own conflict. I exaggerated current cultural trends as far as I believably could, and molded the story world from that.

Carrie: That’s so interesting to see your thought process – from storyless characters to a developed story world.


Q: What surprised you about your books or your characters as you wrote their story?

Amanda: So many things. I’m a planner, so it’s important to my process that I think I know what I’m doing. But I know I’m doing something right when I’m taken aback by the words coming out of my fingers. Even after I determined the ways in which the characters needed to change, I didn’t know how to bring those changes about, usually until I was writing the scene that births the change. I would start writing and suddenly, there they were, exposed on the page and ready to become new, and I was so happy we were finally there and as surprised about it as they were.

Carrie: oh I love that!


Q: What do you most want readers to take away from the Haven Seekers series?

Amanda: Themes are something I never plan. Once I finished writing the series, I had a better idea what it was all about: the importance of Christian community and the security that is found in God alone. I think I’m always also trying to say something about life for the Christian—that it’s not easy, that struggles don’t mean you’re “not doing it right.” We’re meant to lean on God and each other through those struggles. We’re not meant to hide them.

Carrie: So many times, we as Christians sadly wear the mask of ‘I’m fine’ when in reality we are anything but fine. Like you said, we are meant to lean on God and each other – to share each other’s burdens.

Amanda: My new book releases May 2018 from Barbour and is titled No Less Days. I’ve just this week revealed the cover and plot description, so here it is: 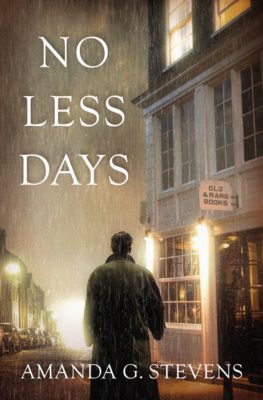 How many lifetimes can God expect one man to live? Over a century old, David Galloway isolates himself from the mortal humans who die or desert him by making a quiet life as a used bookstore owner in Northern Michigan. But then he spots a news article about a man who, like him, should be dead.

Daredevil celebrity Zachary Wilson walked away unscathed from what should have been a deadly fall. David tracks the man down, needing answers. Soon David discovers a close-knit group of individuals as old as he is who offer the sort of kinship and community he hasn’t experienced for decades—but at what cost?

David finds himself keeping secrets other than his own. . .protecting more than himself alone. He’ll have to decide what’s worth the most to him—security or community. When crimes come to light that are older than any mortal, he fears the pressure is more than he can stand. What does God require of him, and is David strong enough to see it through?

Carrie: <flailing> Oh my goodness! I can’t wait to read this one! And that cover! The bookstore #swoon

Amanda is offering one of my readers his/her choice of one of the books from the Haven Seekers series (Print or ebook. International winners only eligible for ebook. Void where prohibited by law.) This giveaway is subject to Reading Is My SuperPower’s giveaway policies which can be found here. Enter via the Rafflecopter form below.


These are all fabulous covers! Which one are you drooling over the most?