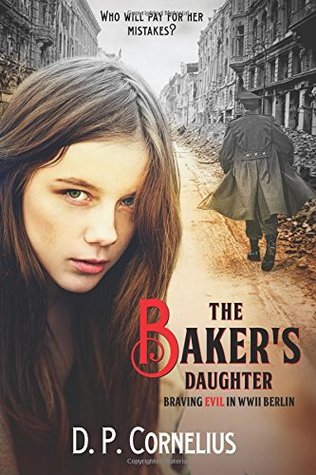 While chaos reigns over WW II Berlin, seventeen-year-old Liddy returns to her family’s bakery only to be confronted by a new customer — Keppler, a Nazi officer. Marek, a young man with a secretive past, labors just a few paces away in the kitchen, but where do his loyalties lie? With the Nazis? With Liddy?

Liddy’s father, Klaus, secures a night job as a prison guard where anti-Nazi dissident, Dietrich Bonhoeffer, is being held. Klaus smuggles out the pastor’s letters, but tensions rise as Keppler establishes a tenuous relationship with Liddy’s young brother, Willy. Does the Nazi officer wish to recruit Willy, or is Keppler there to spy on Liddy’s family?

From air raids to the Hitler Youth, Liddy becomes enmeshed in a world of spies intent on betrayal. When Liddy makes a critical mistake that endangers a loved one, she faces a decision that puts her own faith on the line and her family’s safety in jeopardy.

“Judging others makes us blind, whereas love is illuminating.”

WW2 stories, particularly those about people who stood up to the atrocities committed by Hitler & the Nazis, are one of my favorite types of historical fiction. So when this book came across my radar, I jumped at the chance to read it. 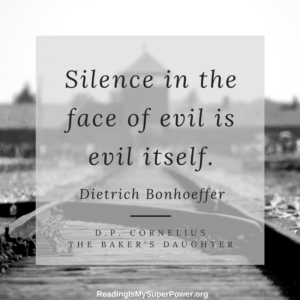 Marek (a Polish refugee) and Liddy (a baker’s daughter who wants to be a history teacher) are both compelling characters – two adolescents who find themselves in Berlin during the second World War. Marek has been forced to grow up faster than anyone should have to, while Liddy is still fairly immature and self-centered. As the novel (and their friendship) progresses, Liddy’s character shows great growth and courage. Their budding romance is bittersweet in many ways, and I wish there was the promise of another book to continue their story further.

Along with Marek and Liddy, a host of other vivid characters grace these pages: Liddy’s parents and her little brother, a Nazi officer named Keppler, and members of the Resistance. I was particularly struck by Keppler’s character, namely how the author gave him a backstory and a heart and soul apart from the typical Nazi stereotype. Along with these fictional faces, readers will also be introduced to a handful of real-life historical figures who lived – and died – courageously for Christ during this era: a Polish friar named Kolbe who voluntarily dies for another Auschwitz prisoner, an imprisoned anti-Nazi dissident named Bonhoeffer, and a Dutch watchmaker named Betsy at Ravensbruck. Their words and testimonies are woven throughout the story in their interaction with the fictional characters, their stories thusly reaching a new generation of readers.

While The Baker’s Daughter is labeled as ‘young adult’, I really think it would appeal more to a middle grade reading level. The reading level is geared toward the younger end of ‘young adult’, and so is the structure of the story. Some of the things that bugged me as an adult reader (some dialogue that reads as historical narrative, etc.) would not even be noticed by middle grade readers. And this is an age group that needs to be start learning about people who stood up to evil, no matter the cost. The story itself only touches on the Holocaust, allowing it to stay in the shadows, but it’s a good starting point to whet their curiosity for more research, further reading, etc.

Bottom Line: The Baker’s Daughter takes readers into the heart of WW2 Berlin, to a simple family and a young refugee trying to survive. It reminds us that everyone we meet is more than what we see on the outside. It shows us the difference one person can make, especially someone young. And it spotlights true heroes, those willing to die if that’s what was necessary to stand up to evil. Will appeal most to middle grade readers, but can be enjoyed at various levels by older ages too.

My Rating: 3.5 stars / Important story to be told! 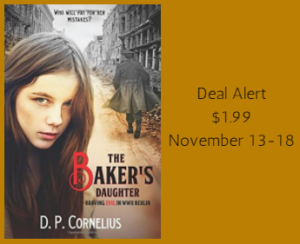 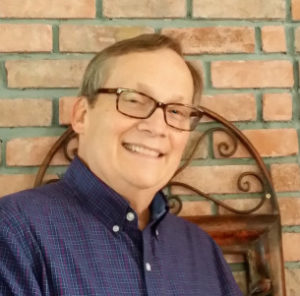 
This giveaway is hosted by SLB Tours, not RimSP
Follow along with the tour here.

4 responses to “Book Review (and a Giveaway!): The Baker’s Daughter by D.P. Cornelius”