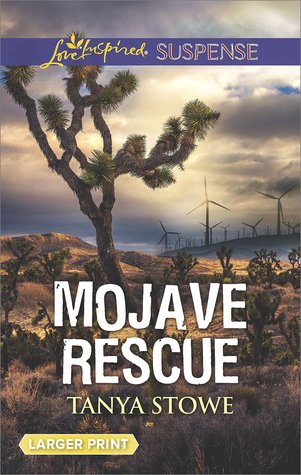 Brilliant, electronic warfare engineer, Drina Gallagher is riddled by guilt and determined to create a weapon to protect American soldiers.

He’s scheduled to connect with operatives at a wind farm in the middle of the desert where he’ll be taken by helicopter to meet with the leader. He arrives at the meeting place only to discover the men have kidnapped Drina and plan to kill her.

Cal must make an instant choice, keep his cover and stop the organization or save Drina. Cal chooses Drina.

They race across the Mojave Desert to escape the killers and Drina discovers that Cal is a man of action grounded in unbreakable faith. His personal walk gives Drina the confidence she needs to confront the guilt of her past. Can He possibly forgive her and allow her and Cal to escape their pursuers? Or will all her hopes and dreams die in the desert?

“Drina Gallagher was a puzzle… one he didn’t have the time to solve.”

Right from the first chapter of Mojave Rescue, Tanya Stowe sets the tension dial to ‘high’ and keeps it there until the very end. High-stakes, fast-paced, don’t-even-breathe action that may even have you looking over your shoulder for a tail before it’s over. (The car-chase kind of tail… not a Tigger tail. Just for the record. lol.) 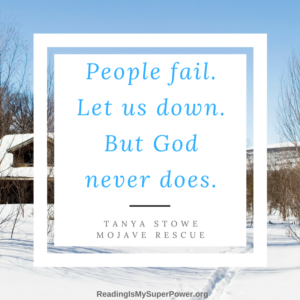 Drina Gallagher is a bit of a puzzle as Cal determines, even as he’s torn between wanting to shake some sense into her or kiss her senseless. She’s naive in some ways, brilliant in others. She has a fierce strength that you wouldn’t guess upon first encountering her and … yes, while most of the danger chasing them throughout the book is the fault of her naivete … her bravery is not to be overlooked.

Cal is … well, in my mind, based on Stowe’s descriptions he looks a lot like Henry Cavill and, given the superman jokes scattered cleverly throughout the novel, I think he’s meant to 🙂 He’s the classic CIA undercover guy but his lauded focus scatters to the wind when Drina is nearby. I think that’s a critical part of his story, though – the realization that he ultimately isn’t in control at all. God is. And in the end, as an intense chase across the Mojave Desert (in the middle of a winter storm blowing through with a vengeance) culminates in a harrowing twist, God is all Cal can rely on anyway.

Bottom Line: Mojave Rescue will keep you glued to the edge of your seat, hardly daring to breathe as the bad guys get closer and closer. It’s intense, suspenseful, and action packed. But tucked into the middle of the fight for their lives, Drina and Cal spare a little time for romance (hello, tension-driven kisses!) and a little time for grace. The kind that reminds us that it’s not all up to us… that the guilt we carry or the standards we can’t ever meet were never our burdens in the first place. They belong at the feet of the One who made us, who died for us, and who carries us now when we have reached the end of our our own abilities. All around, from start to finish, this is a great read with layered characters, a vivid setting, and stellar suspense! 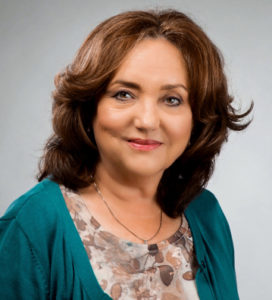 Tanya Stowe is an author of Christian Fiction with an unexpected edge. She fills her stories with the unusual…mysteries and exotic adventures, even a murder or two. No matter where Tanya takes you…on a trip to foreign lands or a suspenseful journey filled with danger…be prepared for the extraordinary.

Tanya: Super speed like Flash so I could get to all the things I want done in one day. Or maybe I’d like to fly so I could see the world. Or maybe…can I be Supergirl who can do all those things?

Q: Who is your favorite book character from childhood?


Tanya: Her name was Mara and she was an Egyptian princess without a throne.


Tanya: I’m very organized except with paper and I like to be prepared for every situation.

Carrie: Being prepared for every eventuality is an under-appreciated skill…. until the eventualities occur and you are the only one prepared! lol


Q: With an electronic warfare engineer and an undercover CIA agent as main characters, what sort of research did you do for Mojave Rescue?


Tanya: My husband was an electronic warfare engineer so I didn’t have to do too much research. He was also very familiar with top secret protocols and methods so I guess I was very lucky.

Carrie: That is all kinds of awesome!


Q: What do you most want readers to take away from Mojave Rescue?


Tanya: A sense of God’s grace. Even when we deny Him, He’s watching over us and He has a plan 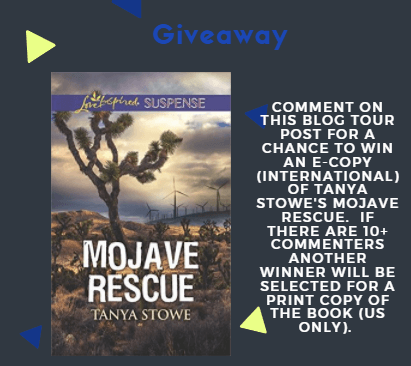 Comment on this blog tour post for a chance to win an e-copy (International) of Tanya Stowe’s Mojave Rescue. If there are 10+ commenters another winner will be selected for a print copy of the book (US only). Giveaway is open until midnight January 8th.

This giveaway is hosted by Singing Librarian Tours, not RimSP.
Follow along with the tour for more chances to win! 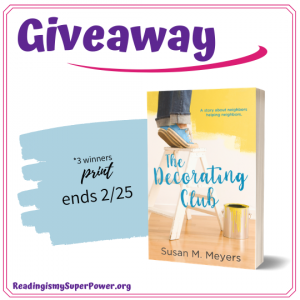 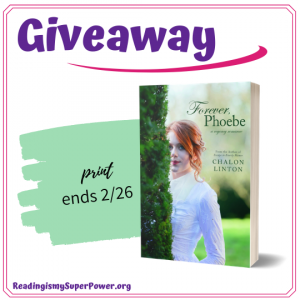