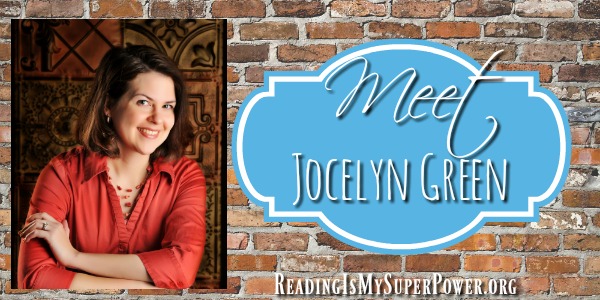 I am so delighted today to welcome Jocelyn Green back to the blog! During the Art of Writing conference last year, I had the privilege of staying with Jocelyn and Bethany House’s Amy Green (no relation). And I discovered Jocelyn’s delightfully subtle sense of humor – she’s hilarious, y’all. (She in turn decided that I smell good. And then we pondered over how these are things you don’t always get to know about someone from just observing them online. So there you go 😉 lol)

Jocelyn Green inspires faith and courage as the award-winning and bestselling author of numerous fiction and nonfiction books, including The Mark of the King; Wedded to War; and The 5 Love Languages Military Edition, which she coauthored with bestselling author Dr. Gary Chapman. Her books have garnered starred reviews from Booklist and Publishers Weekly, and have been honored with the Christy Award, the gold medal from the Military Writers Society of America, and the Golden Scroll Award from the Advanced Writers & Speakers Association. She graduated from Taylor University in Upland, Indiana, Jocelyn loves Mexican food, Broadway musicals, Toblerone chocolate bars, the color red, and reading on her patio. Jocelyn lives with her husband Rob and two children in Cedar Falls, Iowa. Visit her at www.jocelyngreen.com. 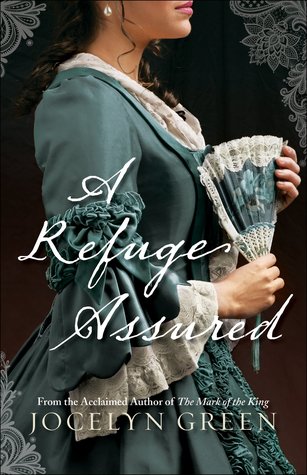 Lacemaker Vivienne Rivard never imagined her craft could threaten her life. Yet in revolutionary France, it is a death sentence when the nobility, and those associated with them, are forced to the guillotine.

Vivienne flees to Philadelphia but finds the same dangers lurking in the French Quarter, as revolutionary sympathizers threaten the life of a young boy left in her care, who some suspect to be the Dauphin. Can the French settlement, Azilum, offer permanent refuge?

Militiaman Liam Delaney proudly served in the American Revolution, but now that the new government has imposed an oppressive tax that impacts his family, he barely recognizes the democracy he fought for. He wants only to cultivate the land of his hard-won farm near Azilum, but soon finds himself drawn into the escalating tension of the Whiskey Rebellion.

When he meets a beautiful young Frenchwoman recently arrived from Paris, they will be drawn together in surprising ways to fight for the peace and safety for which they long.

Hi Jocelyn! Welcome back to the blog! I’m always honored to have you here!

Jocelyn: PIE! (Strawberry rhubarb if you have it)

Jocelyn: Easter (the whole point of everything)


Carrie: Yes! Yes! Such a celebration day. He is risen indeed ♥

Jocelyn: Oh my word, just one?? Drawing out of a hat of favorite songs here: Blessed Be the Name


Carrie: Love that one!


Jocelyn: My pleasure! I will hold myself back from gushing about each one, but here are several I have read and loved recently: The Lacemaker by Laura Frantz, Burning Sky by Lori Benton, The Swan House by Elizabeth Musser, Before We Were Yours by Lisa Wingate, The Promise of Jesse Woods by Chris Fabry. . . I could seriously go on. I just started reading Portrait of Vengeance by Carrie Stuart Parks, too, and I’m hooked already.


Carrie: So many great books out lately!


Jocelyn: Ha! When I was working on Widow of Gettysburg, I wanted to fact check something I thought I’d read somewhere, so I did a Google search for “turpentine” + “maggots” I did confirm that turpentine kills maggots, which was relevant for the doctor in the field hospital…. But I am quite sure my editor and I decided we didn’t need to show readers quite that much truth in that scene.


Q: The Whiskey Rebellion often gets buried in the shadow of the American Revolution. What inspired you to make this part of Liam’s story & what is something interesting you learned while researching it?

Jocelyn: You’re right, it totally does get buried. I wanted to include it in the story because it shows that after America won its independence, it wasn’t a happily ever after scenario by any means. Veterans hadn’t gotten paid, and now they were being taxed in a way that felt just as tyrannical as the Stamp Act. So, how does a citizen balance law and liberty? Freedom and order? Poor Liam really struggled with these questions, and in so many ways, Americans are still wrestling with this balance.

One interesting thing I learned while researching the Whiskey Rebellion was that some of the people opposing the whiskey tax were so inspired by the French Revolution taking place, an article in a Pittsburgh newspaper actually suggested the guillotine as a way to silence their opponents.

Carrie: Oh my! I’m glad that idea didn’t take off…. lol.  And this: “how does a citizen balance law and liberty?” So timely.


Q: One of the reviews I’ve read for A Refuge Assured mentions that the effects of the French Revolution didn’t go away just because the French fled to America. How did this shape Vivienne as you brought her to life on the page?

Jocelyn: Right. Vivienne lands in Philadelphia after she flees France, and she finds, to her surprise, that most of the city is absolutely wild with support for the French Revolution. She wants to forget about the turmoil in France, but she can’t get away from it. Things really heat up for her when a boy is put in her care who—shoot! I almost spoiled the story. I’ll just say that Vivienne’s perspective of law and order clashes with Liam’s, and she really proves to have both moral and political resolve.

Carrie: That surprises me that Philadelphia was so into the French Revolution – I don’t think I ever learned that in history class! Fiction teaches too, y’all!


Q: What do you most want readers to take away from A Refuge Assured?

Jocelyn: The primary theme is that of finding refuge in the Lord, when no physical place of safety seems to exist. But a secondary theme popped up through a character I didn’t plan on creating: Armand, the father from whom Vivienne had been estranged her entire life. The two flee France together, and through their relationship, a picture of reconciliation emerged. At one point Armand says to Vivienne, “One is never too old for a father’s love.” None of us are ever too old –or “too far gone”—for our heavenly Father’s love, either. And that is the greatest reconciliation story of all time. If that’s what readers take away from the novel, I will be thrilled.


Carrie: Oh yes! So thankful for His love & restoration. Amen ♥


Thank you so much for taking time to talk with me again! 🙂 Before we say goodbye for today, tell us what‘s coming up next for you.

Jocelyn: I’m in the throes of writing a new novel! It’s set at the height of the French and Indian War, in Montreal, Quebec, and points between. The heroine is half French, and half Mohawk. It’s unlike any other novel I’ve written. Coming in 2019!

Jocelyn is offering a copy of A Refuge Assured to one of my readers (US – paperback or ebook, International – ebook. Void where prohibited by law.) This giveaway is subject to Reading Is My SuperPower’s giveaway policies which can be found here. Enter via the Rafflecopter form below.


What about you? What interests you most about Jocelyn and/or A Refuge Assured?

85 responses to “Author Interview (and a Giveaway!): Jocelyn Green & A Refuge Assured”