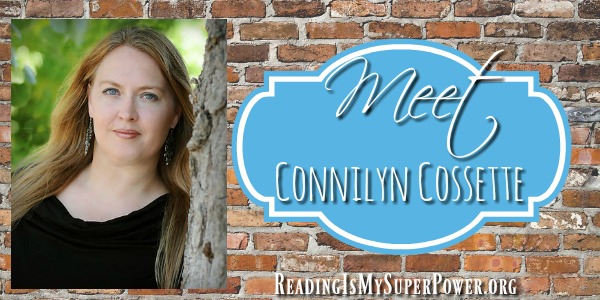 Please join me in welcoming Connilyn Cossette to the blog today! I had the privilege to meet (and hug!) Connilyn at the Art of Writing Conference this past November – what a delight! She is such a sweetheart ♥

Connilyn Cossette is the Christy Nominated and CBA-Bestselling author of the Out from Egypt Series from Bethany House Publishers. There is not much she enjoys more than digging into the rich, ancient world of the Bible, discovering new gems of grace that point to Jesus, and weaving them into an immersive fiction experience.

Connect with her at www.ConnilynCossette.com

Her latest book, A Light on the Hill, begins her new Cities of Refuge series from Bethany House. 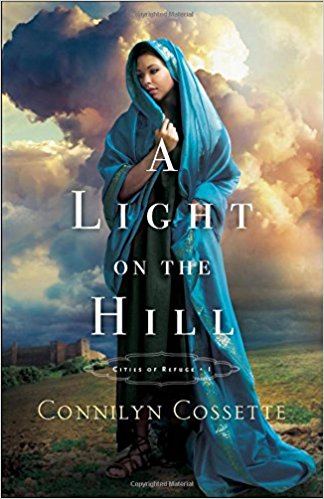 Seven years ago, Moriyah was taken captive in Jericho and branded with the mark of the Canaanite gods. Now the Israelites are experiencing peace in their new land, but Moriyah has yet to find her own peace.

Because of the shameful mark on her face, she hides behind her veil at all times and the disdain of the townspeople keeps her from socializing. And marriage prospects were out of the question . . . until now.

Her father has found someone to marry her, and she hopes to use her love of cooking to impress the man and his motherless sons. But when things go horribly wrong, Moriyah is forced to flee.

Seeking safety at one of the newly-established Levitical cities of refuge, she is wildly unprepared for the dangers she will face, and the enemies–and unexpected allies–she will encounter on her way.

Hi Connilyn! Welcome to the blog!

Connilyn: Apples I guess, because I don’t like the messiness of eating oranges, even though I like the taste. Peeling them with my fingers grosses me out.

Carrie: Right? Me too. (shudders)

Connilyn: I like winter more because I love curling up next to a fire with a cup of coffee and reading in my cozy jammies. And summer in Texas is HOT.

Carrie: I love winter! Yay! Cozy jammies are the best.

Connilyn: Cats for sure. Add a snuggly kitty to the above winter-picture and I’m all set. I have two, Dizzy is a crazy calico and Nelliebelle who is tubby and sweet and is never farther than about three feet from me at all times.

Carrie: Substitute ‘dogs’ for ‘cats’ and ‘puppy’ for ‘kitty’ and you’ve got a deal 😛

Connilyn: I love them both but I’m a pretty habitual coffee drinker. My writer-brain craves the stimulation.


Carrie: I’m pretty sure ‘must love coffee’ is a secret requirement for authors….

Connilyn: Hmmm. I’d love to fly. Then I could go wherever I wanted and explore the world without checking bags, going through TSA security, or squashing into the seat with too-talkative guy next to me. (Seriously guy, I had headphones in! I was introverting!)

Carrie: Ugh! I don’t fly on planes (or helicopters or hang gliders or birds, for that matter) but if I could have the superpower of flying? I might actually make it to places I’ve been wanting to visit lol.


Connilyn: I recently read The Lacemaker by Laura Franz which was gorgeously written, as is usual with Laura’s books, and also loved Roseanne White’s A Song Unheard which I was hooked into from the first page. I am also listening to the Alice Network which has been fascinating so far. Next up is Jocelyn Green’s A Refuge Assured!


Carrie: Oooo The Alice Network is a book that I really want to read! I’ve read Roseanne’s from your list but the other two are still taunting me from my TBR pile.

Connilyn: Well, I was wondering about that incident at Mt. Sinai when Moses burns the golden calf, grinds it into powder, and then makes the Hebrews drink it which in turn makes them all sick. I started googling how gold effects the human body and it turns out there’s arsenic in it which of course is not so great for humans in large doses and also smells like burnt almonds when it’s melted down. I literally spent hours googling all this and how much it would take to kill someone, just for curiosity sake, because I don’t think I actually used any of this information in the Shadow of the Storm but it got me to thinking, did the Hebrews get sick because of low-level arsenic poisoning after drinking the remains of that blasphemous idol? Makes you wonder!


Q: A Light on the Hill begins your new Cities of Refuge series, centered around the Levitical cities of refuge. To be honest, this is a Biblical detail I have never paid much attention to before now lol. What inspired you to write this particular series, and what is something interesting you learned while researching it?

Connilyn: Like you, I didn’t know much about the law in Joshua 20 regarding manslayers in the Torah, but when I dug into it I realized that it beautifully represents Jesus (the perfect refuge for sinners and our High Priest whose death washes away our condemnation), so I decided to place this series in that setting. I learned along the way that eventually the roads to the cities of refuge were meticulously maintained and boundary stones and signs put in place so that a manslayer could find refuge quickly and easily. But of course, we don’t allow our hero and heroine to have such an easy time, because where’s the fun in that?

Carrie: Well, of course not lol.


Q: The heroine of A Light on the Hill is Moriyah, a character we met in your Out From Egypt series. Did you always intend to write your next book about her, or did she just call to you after you met her on the page?


Connilyn: Well first of all, I really wanted to write a story about Moriyah, because I fell in love with her in Wings of the Wind as a young girl. But I needed a reason for her to not be married seven years later and living in Shiloh, which led to her unfortunate branding… (and yes, because of that I wrote that branding in during editing, it wasn’t there in the original manuscript). I literally agonized over hurting poor Moriyah (you can ask my writing partners, I was seriously upset by it) but I am so thankful I did, because I think Moriyah’s struggles with her appearance, her self-doubts about her usefulness in the Lord’s work, and her tendency to put a veil between herself and God, and herself and others, can speak to readers in a unique way.

Carrie: So many of us struggle with those same things on one level or another, don’t we?


Q: What do you most want readers to take away from A Light on the Hill?

Connilyn: First of all, that a God who would provide a City of Refuge for someone convicted of manslaughter, and allow them to go free after the High Priest died, is and always has been a God of grace and mercy. And secondly, that no matter what grief or pain we’ve experienced, God can turn our ashes into beauty and our sorrow to joy.

Connilyn: I have just finished up edits on Shelter of the Most High (and the GORGEOUS cover will be released on February 13th!!!). The second book in the Cities of Refuge was super fun to write because the hero of SOMH is a child in A Light on the Hill so I know him really well, and also because it has a little bit of everything: murder plots, Nazirite vows, romance across language barriers, and pirates (yes, I said pirates!). I am now working on Book 3 which is a prodigal daughter story and once again involves a child from the previous book growing into a hero. It’s been cool to see Moriyah’s story evolving into a family saga and I can’t wait to see where inspiration leads me next!

Connilyn Cossette is offering a paperback copy of A Light on the Hill to one of my readers! (US only) This giveaway is subject to Reading Is My SuperPower’s giveaway policies which can be found here. Enter via the Rafflecopter form below.


What about you? What most interests you about Connilyn or A Light on the Hill?

46 responses to “Author Interview (and a Giveaway!): Connilyn Cossette & A Light on the Hill”