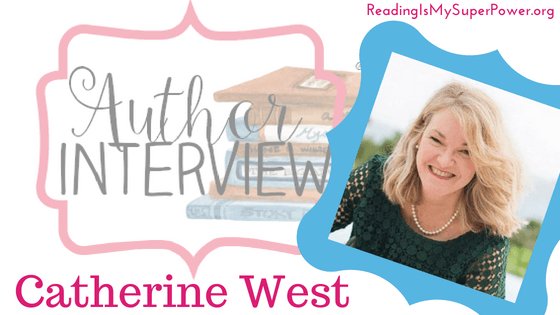 I always love chatting with Cathy West, and so of course I jumped at the chance to have her back on the blog to talk about her new book, Where Hope Begins! In a STARRED review, Library Journal calls Where Hope Begins,

“. . . compelling and heart-wrenching, rising-from-the ashes novel realistically delves into the tough issues of suicide, anger, and guilt with a touch of grace and hope. As with ­Julie Cantrell’s The Feathered Bone, it will leave readers wrung out but satisfied.”

Catherine West writes stories of hope and healing from her island home in Bermuda. When she’s not at the computer working on her next story, you can find her taking her Border Collie for long walks or reading books by her favorite authors. She and her husband have two grown children and one beautiful granddaughter. Catherine is the winner of the 2015 Grace Award (Bridge of Faith) and the Romance Writers of America’s Faith, Hope & Love Reader’s Choice Award (The Things We Knew). Her most recent novels, The Memory of You, released March 2017 and Where Hope Begins released in May 2018. Catherine loves to connect with her readers and can be reached at Catherine@catherinejwest.com 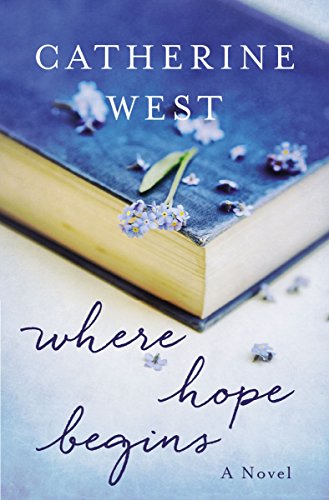 Sometimes we’re allowed to glimpse the beauty within the brokenness . . .

Savannah Barrington has always found solace at her parents’ lake house in the Berkshires, and it’s the place that she runs to when her husband of over twenty years leaves her. Though her world is shaken, and the future uncertain, she finds hope through an old woman’s wisdom, a little girl’s laughter, and a man who’s willing to risk his own heart to prove to Savannah that she is worthy of love.

But soon, Savannah is given a challenge that she can’t run away from. Forgiving the unforgiveable. Amidst the ancient gardens and musty bookstores of the small town she’s sought refuge in, she must reconcile with the grief that haunts her, the God pursuing her, and the wounds of the past that might be healed after all.

Where Hope Begins is the story of grace in the midst of brokenness, pointing us to the miracles that await when we look beyond our own expectations.

Hi Cathy! Welcome back to the blog!

Cathy: Coffee in the morning and tea in the afternoon! I like both, but don’t ever take away my morning coffee!


Carrie: LOL i watch the Hallmark mysteries channel – no crying involved. For that, I just read your books 😉

Cathy: Music! Thus far, I’ve never been able to get into audio books. I’ve tried. I’d just rather read the book myself.


Q: Over or under (on the toilet paper roll)?

Cathy: Is this an actual question?! Over of course.

Carrie: And by that you really mean ‘under’, right? 😉


Cathy: No One Ever Asked, by Katie Ganshert. As Bright As Heaven, by Susan Meissner. Little Broken Things, Nicole Baart, Before We Were Yours, Lisa Wingate. And this came out a while ago, but I only recently read it, The Invention of Wings, by Sue Monk Kidd.


Carrie: Out of that fabulous list, I have only read Little Broken Things (which was very good) but the others are taunting me from my TBR pile as I ‘speak’ lol


Cathy: LOL! You would discover I am very messy. I forget to throw out receipts and tissues. I have an abundance of lipstick. You would assume I have occasional heartburn, and migraine headaches. You might also find a teething biscuit or two stashed in there, and maybe a small toy.


Carrie: You can never have too many teething biscuits 😀


Q: Which character in Where Hope Begins was the most difficult to write?


Cathy: I’ll have to say Savannah. Because her voice had to be the strongest, and she was in so much pain. I also wanted readers to be able to empathize with her, and like her. At first she was so miserable because of what she was going through, that I actually forgot to give her a life. You know, like actually have her leave the house and go do something! LOL! I also knew that her spiritual and emotional growth would be the most important, so I had to work hard to get that just right.


Carrie: One of my friends was just telling me last night that you nailed it – all that hard work paid off! ♥ 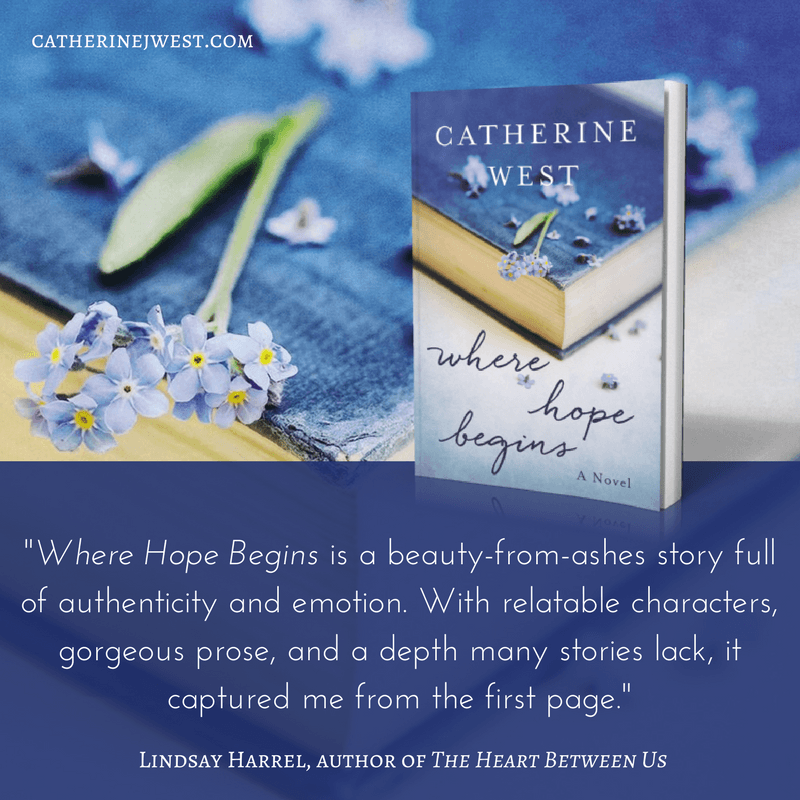 Q: Did you have the whole plot outlined before you started writing, or did you let the characters dictate what came next?


Cathy: This was the first book where I kind of saw it all in my head before I began to write. Of course things changed as I went along, and since I’m a plotter, I didn’t write any notes, I just went with what was happening. But it was the first experience for me where I knew exactly who the main character was and what her journey would be. I also knew I would write her in first person, something I had never done before. And I also knew what the first line would be. My husband is leaving me. I guess my editor thought it was a good first line too, because it stayed. 🙂


Q: Confession – I have a thing for Southern drawls. I once woke up from a nap because Matthew McConoughey was narrating a documentary on dinosaurs that my husband was watching. So, I already suspect Brock will be added to my book boyfriend collection after I meet him, but what else does he have going for him? (I mean… you know… in case other people need something besides the drawl lol)


Cathy: Oh, Brock. Okay, so aside from the Southern drawl, he also looks a bit like Matthew McConoughey. 🙂 He’s an author, and of course loves books, he’s a single dad and he’s devoted to his six year-old daughter, Maysie, as well as his great-aunt Clarice. Family is very important to him. And he has a great sense of humor and . . . well, I think I’d better stop there and let you figure out the rest for yourself!


Cathy: I have a lot of favorite parts and lines from this story, but I think the one that hit me the most was this scene between Savannah, and her wise neighbor Clarice –

Do I want to give up?

I thought I did. Six years ago, I was ready to give it all up. Ready to be done with the

pain, the heartache, and the ever-present shroud of darkness that covered me day in and day

out. But for whatever reason, Kevin came home from work early that day.

Clarice sniffs and gives that knowing nod. “You are here, dear girl, because you are

loved. And you have much love to give. You simply need to find your way back to believing

That last line, God doesn’t give up, people do . . . I sat and stared at it a long while and had to let it really sink in. Because it’s so true.

It’s so easy for us to get to a place of despondency when we really can’t see a way out or an end to whatever hard situation we find ourselves in, and when we don’t feel God’s answering our cry for help, it can be tempting to think He’s given up, abandoned us. But He doesn’t. We can give up, He never will. That line really made me think about how I look at situations in my own life, and how much I’m really willing to turn everything over to God.

And because I know you really wanted me to answer that dreaded question, what do I hope readers will get from this novel, it is also that. 🙂

Carrie: HAHA! Thank you for that 😉 And oh i love that quote – God doesn’t give up. Amen & Amen. So thankful.

Cathy: Thanks for having me, Carrie! And Noah sends a big woof to Zuzu! As far as what’s next, I’m working on a new story that is actually set in Bermuda, so that’s kind of fun. No clue as to when it will be finished, as I have a ton going on right now, but I’m having fun with it!

Carrie: Zuzu woofs back, even though she’s quite pitiful this last week with an injured paw. Poor sweet furbaby ♥ And YAY! I’m already looking forward to reading it 🙂 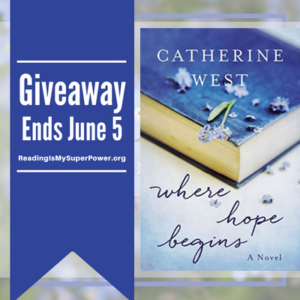 Catherine West is giving away a copy of Where Hope Begins to one of my readers (US only) This giveaway is subject to Reading Is My SuperPower’s giveaway policies which can be found here. Giveaway will run from May 29, 2018 through 11:59pm June 5, 2018. Enter via the Rafflecopter form below.


What about you? Which character do you most want to meet in Cathy’s book – Savannah or Brock (or Clarice)?

59 responses to “Author Interview (and a Giveaway!): Catherine West & Where Hope Begins”