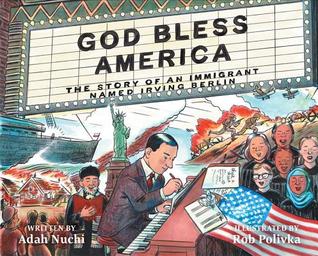 An inspiring portrait of an immigrant and the gift he gave his new home.

Persecuted as Jews, Izzy Baline and his family emigrated from Russia to New York, where he fell in love with his new country. He heard music everywhere and was full to bursting with his own. Izzy’s thump-two-three, ting-a-ling, whee tunes soon brought him acclaim as the sought-after songwriter Irving Berlin. He ignited the imaginations of fellow countrymen and women with his Broadway and Hollywood numbers, crafting tunes that have become classics we still sing today.

But when darker times came and the nation went to war, it was time for Irving to compose a new kind of song:

A song for America.

And so “God Bless America” was born, the heart swelling standard that Americans have returned to again and again after its 1918 composition.

This is the tale of how a former refugee gave America one of its most celebrated patriotic songs. With stirring, rhythmic text by Adah Nuchi and delightful, energetic art by Rob Polivka, readers will be ready to hum along to this exuberant picturebook.

First, I have to say that the illustrations are gorgeously done, with a retro feel and lots of details tucked away inside the images for further discovery and exploration. I could spend all day just looking at the artwork! But there’s a story to be told as well, and I (even as an adult) was curious to learn a bit more about one of America’s favorite composers. The story effectively uses onomatopoeia (which is such a fun word to say) to create a rhythm of words that enhances the theme of the book – how Irving Berlin came to write God Bless America – and complements the illustrations. The facts I learned were simple, perhaps, but there is a lot of depth to be mined here with children if parents and/or teachers want to take it further.

It does make a bit of a point of how great America was to take them in, which makes me a little leery for some reason that I haven’t put my finger on yet… but I also appreciated that the author didn’t shy away from depicting (with the right amount of age-appropriateness) the less-than-desirable living conditions that immigrants faced here. All in all this is a fun book that teaches children a new appreciation for immigrants and their importance in American history – and present-day America. I especially loved the illustrations (as I’ve mentioned) and the author note and time line in the back which gives a lot more detail than the story itself goes into.

(I voluntarily reviewed a copy of this book which I purchased. All views expressed are only my honest opinion.) 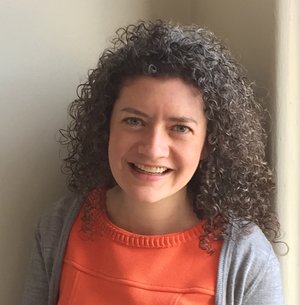 Adah Megged Nuchi was first introduced to the children’s publishing world at home, as the daughter of a children’s book art director. She began her own publishing career at the National Book Foundation, and later at Houghton Mifflin Harcourt Books for Young Readers, where she was an acquiring editor of picture books, middle-grade, and young adult fiction for seven years. Her books have been named to the Kids’ Indie Next List, YALSA Best Books for Young Adults, and Indies Introduce New Voices lists. As an editor, she most loved finding new talent and working with authors to shape a story.

3 winners will receive a finished copy of GOD BLESS AMERICA: THE STORY OF AN IMMIGRANT NAMED IRVING BERLIN, US Only.


This giveaway is hosted by Rockstar Book Tours, not RimSP
Follow along with the tour HERE

15 responses to “Book Review (and a Giveaway!): God Bless America: The Story of an Immigrant Named Irving Berlin by Adah Nuchi”