We are celebrating the trade paperback release of A Deadly Eclair by Daryl Wood Gerber with a brand new tour from Great Escapes Virtual Book Tours! I’m reposting my earlier review here in this post but also including a brand new guest post (and recipe! YUM!) and a brand new GIVEAWAY! 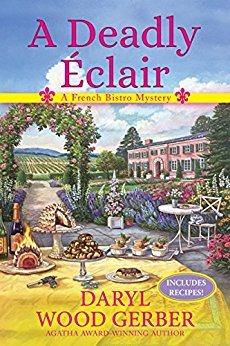 
It’s always been Mimi Rousseau’s dream to open her own bistro, but it seems beyond her grasp since she’s been chased back home to Nouvelle Vie in Napa Valley by her late husband’s tremendous debt. Until her best friend Jorianne James introduces her to entrepreneur Bryan Baker who invests in promising prospects. Now, working the bistro and inn until she’s able to pay it off and call it her own, Mimi is throwing the inn’s first wedding ever.

The wedding will be the talk of the town, as famous talk show host Angelica Edmonton, daughter of Bryan’s half-brother, Edison, has chosen the inn as her perfect venue. Anxious, Mimi is sure things are going to turn south, especially when Edison gets drunk and rowdy at the out-of-towners’ dinner, but by the evening, things begin to look up again. That is until six AM rolls around, and Bryan is found dead at the bistro with an éclair stuffed in his mouth. And the fingers point at Mimi, whose entire loan is forgiven in Bryan’s will.

Now it’s up to Mimi to clear her name and get to the bottom of things before the killer turns up the heat again in A Deadly Éclair, the scrumptious series debut by Agatha Award-winning author Daryl Wood Gerber. 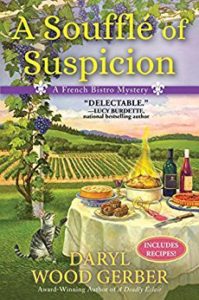 The first book in Gerber’s delicious new cozy mystery series is sweet and savory and offers up a well-rounded menu for a variety of tastes!

Mimi Rousseau makes for a heroine you’ll want as a friend, and in fact her friendships within the book are equally delightful. The bistro’s chef, the staff, Mimi’s best friend, her mom, and a bevy of friends and acquaintances from high school give the story flair and dimension. Additionally, her brewing romance with Nash adds just the right amount of sweet spice, and it promises to be an enjoyable facet of Mimi’s character as the series progresses.

The fictional setting of Nouvelle Vie, including the inn and bistro, will have you seriously considering a vacation to Napa Valley, and the food mentioned throughout the novel will leave your mouth watering! Helpfully, several of these recipes are included in the back of the book with notes from the characters to extend their delightful fictional world just that much longer. And within the actual body of the novel, Gerber achieves an ideal balance of including delectable dishes without stopping the story for a cooking lesson.

Bottom Line: A Deadly Eclair by Daryl Wood Gerber is clean, fun, and well written. The characters are well defined without being caricature, and the recipes tempt even me to try my hand at a few. As far as the mystery, I had suspicions but I changed my mind several times about who I thought ‘done it’. The ending took me by surprise – which I always love – and I look forward to reading Gerber’s backlist while I wait for the next book in this series.

, which she pens as Avery Aames. She will soon debut the new French Bistro Mysteries

and GIRL ON THE RUN.

Fun tidbit: as an actress, Daryl appeared in “Murder, She Wrote.” She loves to cook, and she has a frisky Goldendoodle named Sparky who keeps her in line!

Giveaway below!  Don’t miss out.

Hi, all! I’m so happy to be on the Great Escapes Tour. I’d like to share some of my favorite recipes from A Deadly Éclair, the 1st French Bistro Mystery. It came out in  hardcover in November, but I’m excited to say it’s out in trade paperback as of June 12. Yay!  And the second in the series, A Soufflé of Suspicion, comes out July 10!

I adore soup. I make it at least once a month during regular months and twice a month during the winter. I love the many variations you can enjoy. Vegetables, meats, even fruits. Yes, I just added apple to a butternut squash recipe. Yum!

Onion soup gratinee (which means topped with melted cheese) is one of my go-to soups. I could eat it every day of the week. And because it’s easy enough to prepare, I think you will, too. It keeps well in the refrigerator. And the aroma in the kitchen after you’ve cooked it will knock your socks off.

Enjoy the recipe, and please tell a friend about A Deadly Éclair and the giveaway for this tour! 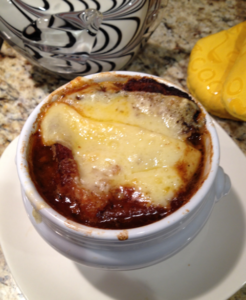 In a large saucepan, melt the butter over low heat.  Add the onions and coat well with the butter. Cover and cook until tender, about 20-30 minutes, stirring occasionally.

Remove the cover and raise the heat a bit – just a bit. Sauté, stirring often. Do not let the onions burn. They will turn a deep caramel brown, about 30 minutes to one hour.

Add the stock and bay leaves, and sprinkle with salt and pepper. Bring to a boil. Reduce the heat and cover.  Simmer for about 15-30 minutes more.

Discard the bay leaves. Taste the soup and add salt and pepper to your liking.  (I refer 1 teaspoon salt and 10 grinds of a peppermill.)

Ladle the soup into four bowls and top with cheese.  It melts instantly!

Serve with crusty bread or crackers.

What about you? What’s your favorite soup to eat?

18 responses to “Guest Post & Review Recap (and a Giveaway!): A Deadly Éclair by Daryl Wood Gerber”