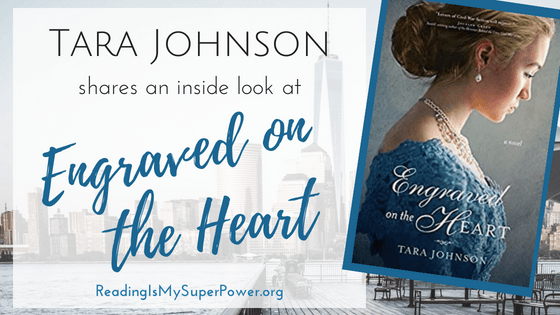 Happy Thursday, my friends! Today I am excited to welcome debut author Tara Johnson to the blog to share an insider’s look at her upcoming novel Engraved on the Heart! 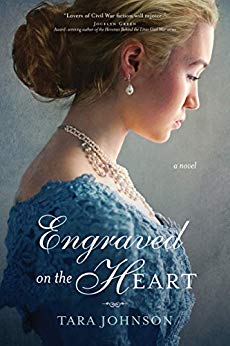 Reluctant debutante Keziah Montgomery lives beneath the weighty expectations of her staunch Confederate family, forced to keep her epilepsy secret for fear of a scandal. As the tensions of the Civil War arrive on their doorstep in Savannah, Keziah sees little cause for balls and courting. Despite her discomfort, she cannot imagine an escape from her familial confines—until her old schoolmate Micah shows her a life-changing truth that sets her feet on a new path . . . as a conductor in the Underground Railroad.

Dr. Micah Greyson never hesitates to answer the call of duty, no matter how dangerous, until the enchanting Keziah walks back into his life and turns his well-ordered plans upside down. Torn between the life he has always known in Savannah and the fight for abolition, Micah struggles to discern God’s plan amid such turbulent times.

Battling an angry fiancé, a war-tattered brother, bounty hunters, and their own personal demons, Keziah and Micah must decide if true love is worth the price . . . and if they are strong enough to survive the unyielding pain of war.

The spark of the idea for Engraved on the Heart began when our family visited Savannah, Georgia. I was entranced with the history and charm of the town. Secrets seemed to ooze out of every corner. 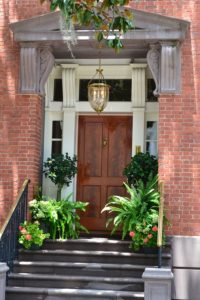 The first spark was ignited by a still-unknown soul. My family had opted to take a historic riding tour of the city. I was especially intrigued by a fact rattled off by our tour guide: “Many of the older homes and buildings in and around the outskirts of Savannah were built by slaves. In fact, if you look closely, you can find some of their fingerprints in the bricks.”

I walked down the cobblestone streets, admiring the weeping willows and moss hanging from the towering trees. As I passed a home, a darkened impression molded into the crumbling brick snagged my attention. I sucked in a surprised breath over the precious detail. There it was, staring back at me. The fingerprint of a slave.

I ran my finger over the scarred impression, marveling that such a small mark could tell such a story. I wondered whose hands had formed the old brick. What was his name? What were his dreams? Running my fingers over that precious print linked me inextricably to the past, binding an invisible cord between the unknown slave and me.

The next day, we visited the Georgia State Railroad Museum, where I found several books in the gift shop about famous women of the Civil War. Courageous heroes like Elizabeth Van Lew, who fought against the norms of her culture to bring freedom and hope to those trapped in darkness.

God slowly unfurled a story in my heart . . . the tale of a girl who battled epilepsy as a child, just as I did, but grew to understand her worth in the eyes of a loving God.

The inspiration for Keziah Montgomery is a combination of three or four of these remarkable women who worked as spies and/or conductors in the Underground Railroad. To consider such a pivotal role as conductor while carrying a burden as unpredictable as epilepsy was a fascinating prospect. Growing up with a seizure disorder, I often thanked God I was born in the era I was. In the 1800s and earlier, such conditions often relegated the bearer to asylums and institutions. Ignorance was rampant.

And what would a good romance be without a handsome, heroic leading man? Enter Micah Greyson, childhood friend of Keziah who has returned to Savannah after attending medical school in Philadelphia. What better way to ramp up the conflict than to have her old childhood chum return to Savannah no longer a good Confederate boy but a devout abolitionist? Although Micah has secretly loved Kizzie for years, when she becomes involved with the Underground Railroad, Micah’s fervor for the cause is suddenly eclipsed by a greater concern . . . fear for the woman he loves.

A variety of other characters fill the pages of this story. The flamboyant antics of Cousin Jennie were inspired by real-life Confederate spy and siren Belle Boyd. (Boyd really was rumored to have ridden a horse into her family’s house when her mother refused to let her attend a party, a historical tidbit that found its way into this story.) Characters like Hiriam, Polly, Mrs. Ward, Benjamin Montgomery, Nathaniel, and Lyman Hill were completely spun from my imagination.

The amount of research it took to craft this story was staggering, but the payoff was well worth it, especially considering the wild—and sometimes humorous—tidbits I gleaned as a result. Some of the most bizarre discoveries I encountered were oddities like “Secesh goods.” Those were bowls and goblets made from Yankee skulls. Confederate tradesmen actually sold them on the streets of Southern towns.

If there is one thing I want you to take away from Kizzie and Micah’s story, it’s this: you have tremendous worth in the eyes of God.

Keziah struggles with the lie “I am worthless.” This lie seems to be an arrow flung with far too much frequency by the enemy and one believed by far too many of God’s children.

Just like Keziah, all of us face hardships of some kind or another, whether physical or emotional. But if we aren’t on guard, the enemy will tell us we have no worth.

The truth is Jesus thought we were so valuable, he died to keep us. You are precious to God. You are loved and wanted, cherished by the Creator of the universe. The scars in His hands prove it.

His fingerprints are engraved on your life. 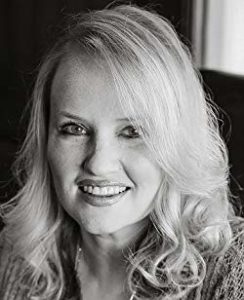 A passionate lover of stories, Tara Johnson uses fiction, nonfiction, song, and laughter to share her testimony of how God led her into freedom after spending years living shackled to the expectations of others. She is a member of American Christian Fiction Writers and makes her home in Arkansas with her husband and three children. 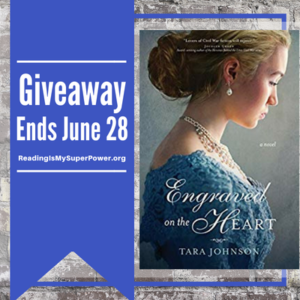 Tyndale House is offering a print copy of Engraved on the Heart to one of my readers! (US only) This giveaway is subject to Reading Is My SuperPower’s giveaway policies which can be found here. Enter via the Rafflecopter form below.


What about you? What is most meaningful to you about Tara’s post?

52 responses to “Guest Post (and a Giveaway!): Tara Johnson shares an inside look at Engraved on the Heart”