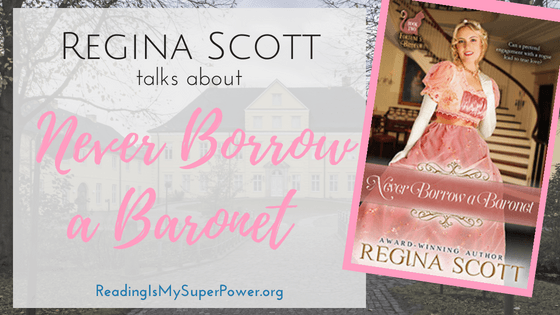 Happy Monday (is that an oxymoron?)! Today, I’m excited to welcome Regina Scott back to the blog to chat about her new Regency romance, Never Borrow A Baronet – the second book in her Fortune’s Brides series. Specifically, Regina is talking about the grand country houses and what it took to maintain them! 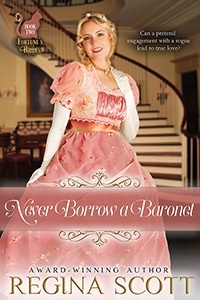 After caring for a crotchety countess, Patience Ramsey wants a more purposeful position. So, when Miss Thorn of the Fortune Employment Agency offers her the post of assistant to amateur apothecary Augusta Orwell, Patience jumps at the chance. Then her new employer introduces her at an Easter house party as the bride-to-be of her nephew Sir Harold Orwell. Miss Thorn’s cat Fortune may approve of Sir Harry, but Patience has no interest in borrowing the handsome baronet. She’s had her heart trampled on by false promises before.

Sir Harry has enough on his hands trying to restore the family name while spying for the English against the French. But the pretty Patience could cover for him when he must ply his trade during the house party, so he convinces her to agree to the charade. As Harry’s work brings danger closer, he begins to realize Patience embodies everything he could want in a wife. Can he convince her to overlook the scandals surrounding him and exchange their false engagement for a true love?

This sweet, clean Regency romance is the sequel to Never Doubt a Duke. Fortune’s Brides: Only a matchmaking cat can hunt true love.

“What happened?” Patience asked, plucking the fabric away from the cut on Harry’s arm.

“Caught myself on a briar on the way home,” he said, watching her.

“I would commend you on your ability to lie,” Patience said, “but it’s not a convincing lie. No briar, sir, cuts through a sturdy wool coat and muslin shirt. I cannot tend to the wound unless I can see all of it. Remove your shirt, please.”

It was likely the urgency that made her speak so boldly. It was likely his injury that made him obey. She went to fetch the washbasin and cloth that had been left for her. Turning toward him, she tried not to stare at the bands of muscle, the sprinkling of dark hair. Clearly, he did something other than gamble and drink the days away.

“If you must know,” he said, “I was shot at. One of the pitfalls of chasing a married lady.”

Oh, but he was wicked. “You are fortunate the husband was such a poor shot.” She wet the washcloth with the rosewater and dabbed at the wound. The blood was congealing now, oozing slowly from the gash.

Patience glanced up with her sweetest smile. “Forgive me. It will be tender for some time. Unlike your feelings for the lady, I suspect.” She busied herself opening the jar and dipping up a fingerful of the ointment.

“Why not? Gussie tries on a regular basis.”

“And why would your own aunt want to poison a gentleman of your standing?”

That grin popped into view, bringing out the dimple again. “As you can see, she has countless reasons. Very well, do your worst. I’ll endeavor to bear it like a man.”

Patience bit back a response but spread the ointment over the wound. “And when I’m finished, you must retire to another room.”

He inspected her handiwork, then refolded the cravat to tie it over the wound. “But you’ve made me so comfortable here.”

Patience handed him his shirt. “I’ve done all I can. If you refuse to leave, I’ll simply have to ask your aunt for other accommodations. Even if Miss Thorn, Miss Villers, and her brother are in residence, there must be somewhere I can sleep undisturbed.”

In the act of pulling on the shirt, he stiffened. “You can’t ask Gussie. Not in front of the Villers.”

Why did he look even paler than a moment ago? Well, she was about to make it worse yet again. He could not rise in the morning innocent to his aunt’s machinations.

“I must,” Patience told him. She drew herself up. “And you may as well know all. Your aunt asked me to pose as your betrothed. If you don’t leave this room immediately, you may have no other choice than to follow through and marry me.”

I never seem to get ready for summer until it’s already fall, so I often miss my chance at a really good vacation somewhere beautiful and fun. My heroine in this month’s Never Envy an Earl, Yvette de Maupassant, thought she would have something of a vacation from her usual daring and dangerous life when she posed as companion to a hypochondriac countess. But nothing prepared her for Carrolton Park, and Gregory, Earl of Carrolton. 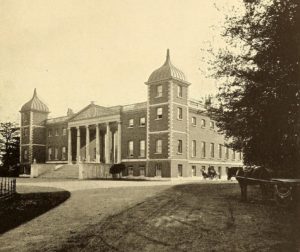 I based Carrolton Park largely on Osterley Park, a great house outside London. Owning such a large, expansive estate and a sprawling country house went hand-in-hand with being an aristocrat in Regency England. These mansions boasted dozens of bedrooms, dining rooms large enough to seat two hundred, withdrawing rooms or salons on different floors, sometimes only distinguishable by the style or color of the furnishings! Then too, some wealthy families collected paintings or sculptures or owned huge libraries that took up more rooms. Chatsworth, the home of the Dukes of Devonshire, numbers more than 250 rooms.

As my mother would say, “Who’s going to clean all that?”

That’s the other thing about great houses. It took an army to care for them. In the city, a family might be able to get away with four servants per person. That might seem like a lot, but consider the fact that a husband and wife would need at least one lady’s maid and likely a valet to help dress and undress them, a groom to tend the horses and escort them while riding, a coachman if they had a carriage, a footman or man-of-all-work to tend to things, a cook and scullery maid, a parlor maid for cleaning, and probably a butler or housekeeper to manage them all. 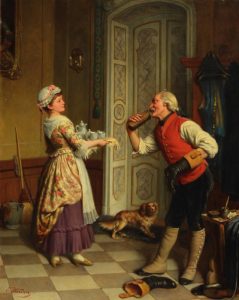 When you had a house as big as Chatsworth or Osterley Park, you added many more housemaids for all the rooms, additional footmen for porting and carrying (and likely a hierarchy, with underfootman as well), a laundress or two for the estate linens, gardeners, more grooms, a stable master or master of horse, additional kitchen staff, and a land steward, at a minimum!

Some houses included one other resident besides family and servants: the companion, that sometimes-treasured, sometimes-put upon lady of impoverished means who kept another lady, a spinster aunt or elderly widow, perhaps, company. Some companions were like visiting cousins—they ate with the family, took part in all entertainments, read aloud to pass the time, and practiced needlecraft with the mistress. Others were expected to be closer to nurses—offering comfort for the ill and infirm. A lady might pour all her secrets into the ears of her companion, knowing she had a captive audience.

Unless of course, the companion has a few secrets of her own.

What about you? Do you prefer a cozy cabin or a massive mansion? (Let’s pretend you have all the money and servants to care for either.) Where would you like to snuggle up to your sweetie?

Comment today for a chance to win a print copy of the second book in the Fortune’s Brides series, Never Borrow a Baronet, which introduces Yvette de Maupassant (US only). 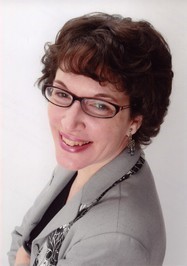 Regina Scott started writing novels in the third grade. Thankfully for literature as we know it, she didn’t actually sell her first novel until she had learned a bit more about writing. Since her first Regency romance was published in 1998, her stories have traveled the globe, with translations in many languages including Dutch, German, Italian, and Portuguese. She and her husband of 30 years reside in Washington State on the way to Mt. Rainier. Regina Scott has driven four in hand, learned to fence, sailed on a tall ship, and dressed as a Regency dandy, all in the name of research, of course. Sign up for her alert service to hear when the next book will be out. You can find her online blogging at www.nineteenteen.com. Learn more about her at www.reginascott.com. 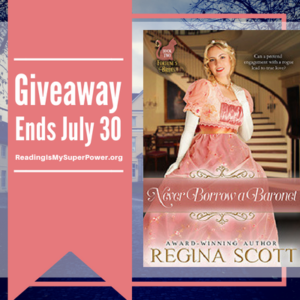 Regina Scott is offering a print copy of Never Borrow a Baronet to one of my readers! (US only) This giveaway is subject to Reading Is My SuperPower’s giveaway policies which can be found here. Enter via the Rafflecopter form below.

52 responses to “Guest Post (and a Giveaway!): Regina Scott & Never Borrow a Baronet”