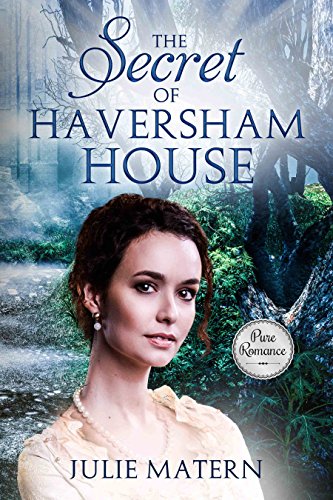 EIGHTEEN-YEAR-OLD FRANCESCA HAVERSHAM is privileged, beautiful, and naïve. Lineage, titles, and wealth are the ultimate virtues among nineteenth-century English aristocracy, and Francesca is elite society’s newest and most celebrated debutante from one of England’s most illustrious families. Her pedigree is impeccable—or is it?

HER COMING-OUT BALL brings with it the appearance of one Mr. Langley Ashbourne, and Francesca is immediately taken in by his handsome features and flattering words. But not everything is as it seems, and flowery comments can only hide dark truths for so long. Meanwhile, a long-buried secret creeps ever closer to the light, one that would destroy her comfortable life, tarnish her family’s character, and ruin all hopes of a reputable marriage.

The Secret of Haversham House is rich with language and atmosphere, the Regency setting coming alive across England, France, and Italy. Readers will definitely be immersed in the time period with the vocabulary, activity, and attitudes of the era.  There are also several Austen nods throughout the novel, including a Willoughby-esque character and delicious language like ‘ineffable’, so fans of her books will enjoy the mood and cadence of the story.

I enjoyed visiting France and Italy in this story, during this time period. We so often in Regency novels spend the most time in England, but there was such layered cultural and societal expectations in these other countries as well. I also really liked the first chapter – it’s a bit different in that it reads as though someone has sat down next to you to tell you a story – and i LOVE that technique! If this were a movie, the first chapter would be the quavery voice that introduces you to the backstory as scenes go along with it play on screen. It set the tone of the story and made me want to curl up with a mug of hot chocolate to read the rest.

However, the story does tend to get bogged down in needless detail and scenes that don’t really advance the plot. There’s also a lot of head hopping (where the narrative switches to another character’s perspective with little or no transition) and a good tell of telling instead of showing. Sometimes, too, a scene with one character as its focus starts out from the perspective of another, more minor, character and the transition back to the main character isn’t always clear. All in all these aren’t critical problems but they were distracting and made some portions of the story a bit tedious :-/

Bottom Line: Less of a romance and more of a coming-of-age story, The Secret of Haversham House is also a sweet story of embracing who you are and being true to your heart, regardless of what outside observers have to say. Despite some problems with pacing and perspective, Matern nevertheless delivers characters with whom readers will want to spend time as the secrets of Haversham house are revealed. 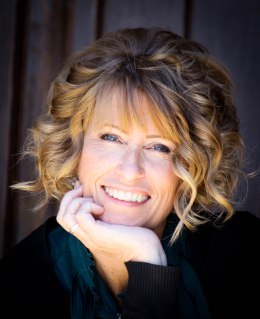 Julie Matern is a resident of Utah. She attended the University of Exeter in Exeter, England, and graduated with a double major in French and Education. She was born and raised in England, moving to America after her marriage and is the mother of six children. She has served in the PTA for over 20 years, taught tap dance, and enjoys amateur photography. She is the author of ‘British War Children’ ( for which she received a “Recommended Read” award from the League of Utah Writers) and ‘British War Children 2: An Enemy Among Us’. 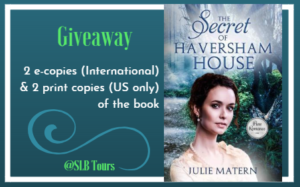 
This giveaway is hosted by SLB Tours, not RimSP
Follow along with the tour HERE.

2 responses to “Book Review (and a Giveaway!): The Secret of Haversham House by Julie Matern”

Until I Met You by Tari Faris

She Made it Matter by Chiara Talluto

Something Worth Doing by Jane Kirkpatrick

The Conqueror by Bryan Litfin

Joy to the World collection