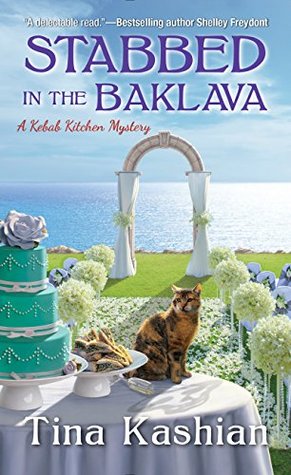 Lucy Berberian has taken over her family’s Mediterranean restaurant on the Jersey Shore after an unsatisfying stint at a Philadelphia law firm. It’s great to be back in her old beach town, even if she’s turning into a seasoned sleuth . . .

Catering a high-society wedding should bring in some big income for Kebab Kitchen—and raise its profile too. But it’s not exactly good publicity when the best man winds up skewered like a shish kebab. Worse yet, Lucy’s ex, Azad—who’s the restaurant’s new head chef—is the prime suspect. But she doesn’t give a fig what the cops think. He may have killer looks, but he’s no murderer. She just needs to prove his innocence, before he has to go on the lamb . . . 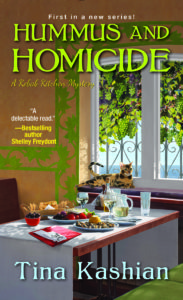 A word of advice: Before you start reading this latest Kebab Kitchen Mystery, do yourself a favor and go to your local Mediterranean restaurant and/or grocery and buy a big batch of baklava to snack on as you read. Trust me. You’ll be craving it like crazy by the time you’re through 😉

Lucy Berberian is back, with her culturally diverse cast of supporting characters, to learn the ins and outs of running her family’s restaurant (and cooking the yummy dishes!), trying to decide between two hot guys who are smitten with her, and solving a murder in her free time. She is a really likable character who you’d want to be friends with in real life – and not just for the delicious leftovers – and she has a host of friends and family who are equally likable. It’s easy to get caught up in the stories, in the subplots, in the humor, and in the FOOD. (Did I mention the baklava?? YUM)

The murder mystery is once again high-stakes for Lucy, since she’s inadvertently involved in more than one way. Kashian weaves in lots of twists and turns and red herrings which keep the interest and tension levels steady. I found myself laughing out loud a couple of times because I could easily picture the scene she’d set – and the antics that Lucy had gotten tangled up in. It’s not punchy humor, though, but just very charming and smartly done.

Bottom Line: Make a reservation at the Kebab Kitchen, dig into all the hummus varieties and the baklava (not together), and hitch a ride with Lucy and her friends and family as she tries to solve a murder to keep her old flame out of jail. Well-plotted and lots of fun, the mystery and the characters will keep you fully engaged from start to finish!


Reviewer’s Note: Readers may want to be aware that there is some cursing in this book. 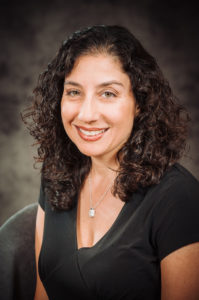 Tina Kashian spent her childhood summers at the New Jersey shore, building sand castles, boogie boarding, and riding the boardwalk Ferris wheel. She also grew up in the restaurant business where her Armenian parents owned a restaurant for thirty years. She worked almost every job—rolling silverware and wiping down tables as a tween, to hosting and waitressing as a teenager.

After college, Tina worked as a NJ Deputy Attorney General, a patent attorney, and a mechanical engineer. Her law cases inspired an inquiring mind of crime, and since then, Tina has been hooked on mysteries. The Kebab Kitchen Cozy Mystery series launches with Hummus and Homicide, followed by Stabbed in the Baklava and One Feta in the Grave by Kensington Books. Tina still lives in New Jersey with her supportive husband and two young daughters. Please visit www.tinakashian.com and join her Newsletter to enter free contests to win books, get delicious recipes, and to learn when her books will be released.

What about you? Have you ever had baklava?

21 responses to “Book Review (and a Giveaway!): Stabbed in the Baklava by Tina Kashian”