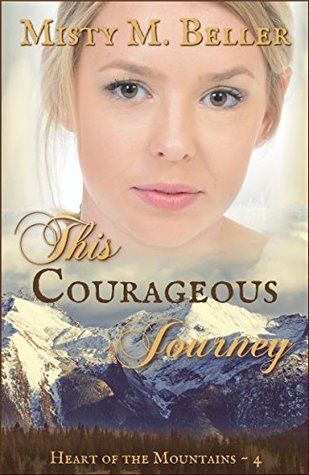 As the fifth daughter in a family of nine children, Noelle Grant has spent her life working to be unique. Her love of stories helps define her goal—to be known around the country as one of the top news correspondents of her time. And what better way to uncover sensational stories than to travel through the mountain wilderness to visit the brother she hasn’t seen in years? The trip comes together perfectly as she plans to journey with family friends who will be settling in the same area. Her first inkling that things may not be as perfect as planned comes in the form of the mountain man they hire as their guide for the final leg of the journey.

When Daniel Abrams agrees to guide the small group of easterners along his usual journey northward to the Canadian mountains, his gut tells him he’s making the wrong decision. But if he doesn’t take them, who will? The man in charge refuses to consider turning back. As they start out, Daniel can’t help but notice the woman traveling under the care of her friends. Though she appears too genteel to last long in these mountains, she soon reveals a strength that draws him more than he should allow.

As the dangers of this wilderness become more than the group bargained for, Noelle is faced with the choice to delay her journey northward or proceed alone with the man she’s come to trust against all reason. She never imagines her decision will place her—and the man she loves—in a situation more hazardous than any story her imagination could conjure. 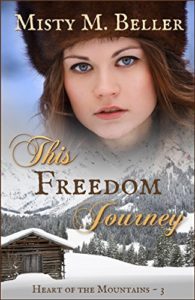 “… this journey is the beginning of greater things.”

Misty Beller has quickly become one of my favorite historical romance authors. While I didn’t start reading her books until this Heart of the Mountains series, I can’t kick myself too much because that just means I have her backlist waiting for me to discover and enjoy next!

In This Courageous Journey, we meet Simeon’s little sister Noelle Grant (don’t worry though – you can definitely read this as a stand alone too) and her group’s wilderness guide Daniel Abrams. As in each of these Heart of the Mountains books, the journey through the Canadian Rockies is treacherous and gives me a new appreciation for those who braved the often-fatal terrain to forge a new life. With my relatively pampered life in comparison, i don’t think i would have even made it up on the horse, much less lasted more than a day through blizzards and grizzly bears and storms and bobcats and all the hazards that go along with each of those. These characters and their courage – knowing that, while Noelle and Daniel are fictional, there were real people who endured these journeys – is so inspiring.

The setting might have varied weather extremes – from lightning and thunder to waist-deep snow and frigid temps – but the romantic tension sizzles and sparks and really should have melted all the ice and snow they encountered. Those kisses. Whew 😉 Beller excels at building the tension until it just can’t go anywhere except a kiss and raspy voices that mutter “You undo me, woman”. SWOON. And yet at the same time, there is an exquisite tenderness that undergirds and motivates the passion, making their journey – from strangers to friends to more – one that readers will root for from the beginning.

Tucked away in the adventure and romance is a gentle thread of faith that has a two-fold message. One is that God is with us, even when things seem to be getting worse instead of better. He’s there. He’s good. And He loves us dearly. The other part of the thread is a tender reminder that the way we see ourselves, even the way others see us, is a pale – and often inaccurate – reflection of the strength and worth God sees when He looks at us. And since we are never outside of His watch, our truest self is held there in His heart for us to find as we know Him (and ourselves) better along the journey.

Bottom Line: If you have not yet discovered this edge-of-your-seat, heart-in-your-throat series you are really missing out. I experienced the whole gamut of emotions while reading This Courageous Journey – moments that had me gasping out loud in shock, sighing in (sometimes very short-lived) relief, swooning at the passionate kisses and love, and even nearly praying for their safety. That’s how invested I was in this story and the characters that Beller has so skillfully crafted. Adventure, humor, romance, and faith are all a part of this riveting novel which is not to be missed! 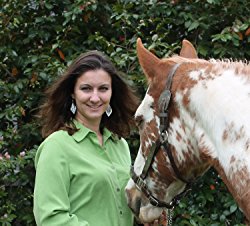 Misty M. Beller writes romantic mountain stories, set on the 1800s frontier and woven with the truth of God’s love.

She was raised on a farm in South Carolina, so her Southern roots run deep. Growing up, her family was close, and they continue to keep that priority today. Her husband and daughters now add another dimension to her life, keeping her both grounded and crazy.

God has placed a desire in Misty’s heart to combine her love for Christian fiction and the simpler ranch life, writing historical novels that display God’s abundant love through the twists and turns in the lives of her characters.

Other Books by Misty M. Beller

Ever Been Struck by Lightning?

One of the fun things about being a writer is the crazy topics I get to research. Without giving away too much of the story, part of my research for This Courageous Journey included uncovering what happens when lightning strikes a person. It turns out anything can happen!

Surprisingly, about nine out of ten people struck by lightning live to tell their story. Each person’s experience seems to be different—some are knocked unconscious, while others are horribly aware of everything happening. One person who was struck said it seemed as if time slowed to a crawl and a white haze surrounded him like a bubble, as excruciating pain shot through him.

People usually try to determine the path the lightning traveled through them, based on where burn marks appear on both skin and clothing, but sometimes that can be difficult if jewelry or coins were touching the body. Survivors might suffer a variety of short- and long-term effects, including—but not limited to—cardiac arrest, confusion, seizures, dizziness, muscle aches, deafness, headaches, memory deficits, distractibility, personality changes, and chronic pain, among others. That may sound like an awful list, but it does beat the alternative!

As I considered the possible effects of a lightning strike when I was writing This Courageous Journey, I was reminded once again how magnificent God’s creation is. Both the incredible power contained in one streak of lightning, and the beautiful inner workings of the bodies He created for us. As the Psalmist said, we are “fearfully and wonderfully made!”

To celebrate her tour, Misty is giving away a grand prize of a $50 Amazon gift card!!

28 responses to “Book Review (and a Giveaway!): This Courageous Journey by Misty M. Beller”