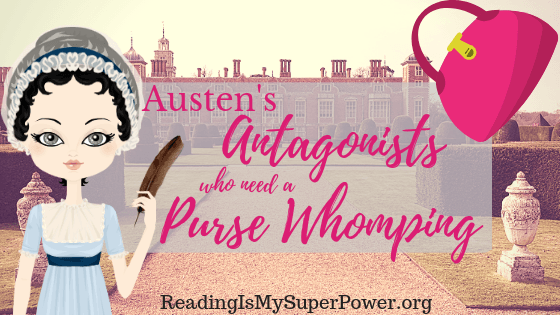 Or would that be ‘reticule whomping’ in Jane Austen’s case? 😉

Today’s Top Ten Tuesday theme is all about villains, and there were any number of ways I could have gone with this post. But I knew whatever I did it needed a purse whomping angle to it! Not that I have ever actually purse whomped anyone…nor do I condone violence. But my sassy side needs a verbal outlet at times, since I don’t curse, so ‘purse whomping’ threats are all I’ve got haha!

Austen writes some great heroes and some great heroines, but she also writes a bunch of antagonists that rile up my purse whomping urge. They aren’t always the obvious ‘villains’ in the story either…

Fanny Dashwood from Sense & Sensibility is one of those characters that grates on my last nerve. So self-focused, greedy, and manipulative. So much heartache could have been avoided if her husband had more of a backbone. So maybe I should purse whomp him instead? hmm…

There is no doubt that Wickham needed a good purse whomping – more than once – in Pride & Prejudice. His way of dealing with disappointment was to try seducing a different Bennet sister on three different occasions – and succeeding on the third try, with poor flighty Lydia.

I have a feeling that many a reticule-owner has wanted to whomp poor Willoughby for his treatment of our dear Marianne in Sense & Sensibility. People may have tried to make him a sympathetic character if his feelings for Marianne were in fact genuine but I never see any redemption in him (unlike with Wickham).

Jealous women are never attractive. Snooty jealous women even less so. Caroline Bingley is the epitome of proud and prejudiced, and her manipulations and not-so-veiled cut-downs leave my purse a little twitchy.

Goodness, Sense & Sensibility has a lot of purse-whompable characters! Lucy Steele is a chip off of Fanny’s shoulder, despite there not being any blood relationship between them. That smirk on her face as she shatters Elinor’s dreams? Purse. Whomp.

Obnoxious. Arrogant. Dull. John Thorpe from Northanger Abbey is clearly not the sharpest knife in the kitchen and doesn’t even do ‘villain’ all that well. But what earns him a purse whomping is the fact he will not shut up about his awesome horses and awesome carriage – none of which are awesome.

The quickest way to end up on my purse whomping list is to a) be obnoxious and b) trifle with hearts for the fun of it. Such is the case with Henry Crawford of Mansfield Park. Although he does end up getting a purse whomping of sorts when his plan to get Fanny Price to fall for him rather gloriously backfires on him.

In Persuasion, William Elliot is the reason I love Captain Wentworth so much. Wentworth shines a light on all of Elliot’s shortcomings, particularly as Elliot pursues Anne for the sake of social and economic advancement. Grrr….

Knightley is my fave Austen hero, but Emma is my least favorite heroine. Yes, she’s not technically an antagonist – although I could argue that she’s her own antagonist. And yes, she grows on me by the end of her eponymous novel but goodness, girlfriend could have used at least a couple of purse whompings before she got there. So many wince-worthy moments.

Oooo I know I’m risking some rotten tomatoes being lobbed my way with this one, but honestly y’all. The later half of the book notwithstanding, Mr. Darcy was in serious need of some serious purse whompings before he got around to redeeming himself. Which is why he is my least favorite of Austen’s heroes. And why I gladly consider him a purse-whomp worthy antagonist… until he becomes a hero. Lol.

What about you? Which of Austen’s characters (antagonists or otherwise) would you like to purse whomp?