In this captivating novella by Dawn Crandall, Nicholette Everstone is already a widow at the age of twenty-two: her husband was murdered on their wedding day. She has just returned to Boston after two years of mourning in Europe. Although her husband was loving, the marriage was an arranged one, and Nicholette would like to wed again–this time for love…and to someone safe.

As she acclimates to life in Back Bay again, Nicholette meets someone she can’t help but fall for. But when she learns of the danger and sacrifices Cal Hawthorne takes on for the safety of others, will her heart be strong enough to keep her fears of “what if” at bay?

Twisting my reticule to the other side of my wrist, I grabbed the small rungs of the ladder and started up the few short steps to reach the books. Sylvie wanted three more, and since they were very small, I was pretty sure I’d be able to grab them all in one swift move and make my way back down in short time. But that was not taking into account the heels of my boots.

As I slipped my fingers around a number of the books and went to maneuver them off the shelf, I lost my balance and wobbled. And then, because my heels were caught on the rungs, I fell back and quite literally, straight off the ladder.

I closed my eyes, my arms extended into the air above me, quite unladylike, and then waited for a drastic landing onto the hard, wooden floor below.

But instead, I found myself in a pair of strong arms.

Since my eyes were still closed, and I clutched the only book left in my hands—after losing the others—I prayed silently and fervently that the arms were those of the gangly bookseller….

But I knew better.

I knew exactly whose arms they were.

Dawn Crandall‘s debut Gilded Age Victorian romance, “The Hesitant Heiress,” was a 2015 ACFW Carol award finalist in the debut category and received the 2015 Gayle Wilson Award of Excellence, the 2015 Write Touch Reader’s Choice Award and the 2015 Romancing the Novel Reader’s Choice Award. Her follow-up novel, “The Bound Heart,” received the 2016 Laurel Award from Clash of the Titles. Dawn earned a BA in Christian Education from Taylor University. She’s been balancing books and babies lately as her two sons were both born as the four books of her Everstone Chronicles series were being released from Whitaker House from 2014 to 2016. Dawn lives with her husband and two young sons on a hobby farm in her hometown in northeast Indiana. 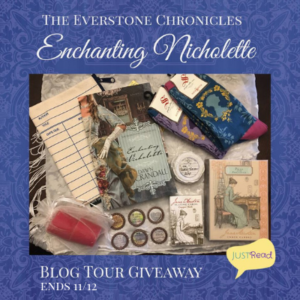 Enter via the Rafflecopter giveaway below. Giveaway will begin at midnight October 29, 2018 and lasts through 11:59pm November 12, 2018. Void where prohibited by law. US addresses only. Winners will be notified within a week of close of the giveaway and given 48 hours to respond or a new winner will be chosen.

Pause for Tales
Sprinkles and Pink

Joy of Reading
Living Outside the Lines
Singing Librarian Books

19 responses to “Book Spotlight (and a Giveaway!): Enchanting Nicholette by Dawn Crandall”