Welcome to our author friend Lisa Tawn Bergren‘s Mini Montana Scavenger Hunt! If you’re just joining the hunt, be sure to visit Lisa’s website FIRST for details and the complete schedule. Each stop offers a daily giveaway and clues you need (in bold) to complete the hunt and enter to win the major prizes on Lisa’s website! 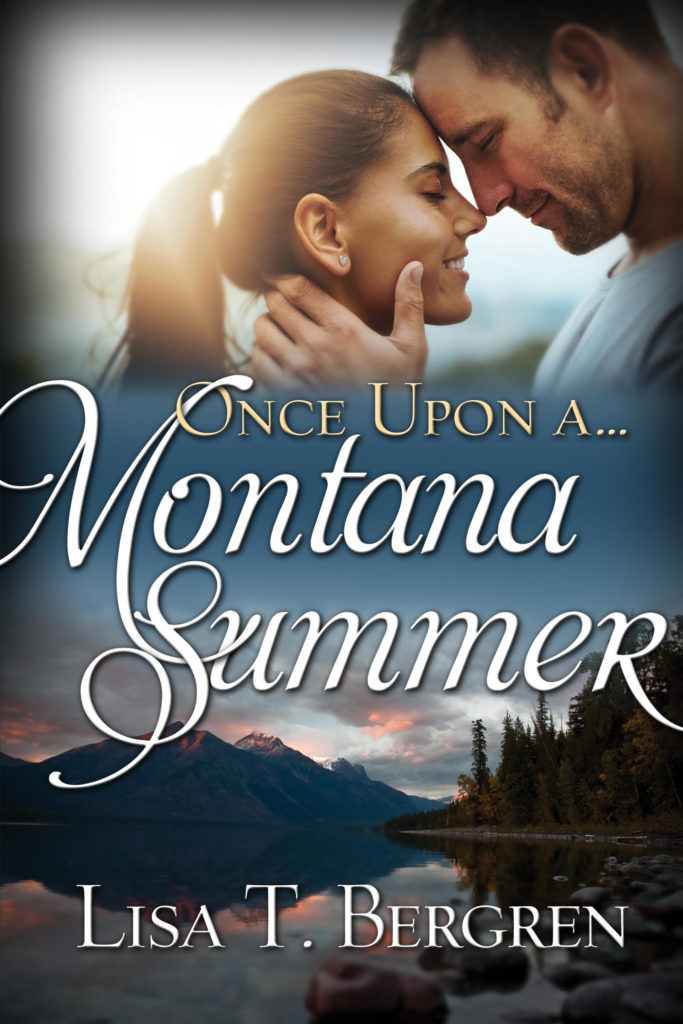 Love is Never Best Played Out on TV…

Adalyn Stalling’s clients convinced her to be a contestant on their reality TV show, The One. Hundreds of thousands of viewers tune in each week to watch a group of bachelorettes try to win one bachelor’s heart, and then during the next season, watch bachelors do the same.

Adi appeared on the show twice-once as a potential love-match for the bachelor, once as the bachelorette. As a marketing executive for the firm who handles the show, Adi initially became a part of the cast in order to learn more from the “inside.” But as much as she wanted to stay professionally removed, she ended up giving her heart to both Adam and Connor.

Both times, the men broke it off.

Now America’s most famous “loser at love,” Adalyn is trying to pick up the pieces of her life. Given the media frenzy and the paparazzi that chase her, she’s finding it difficult. And just as she learns she may have picked up a stalker, her childhood friend, Chase Rollins, tracks her down at last. He informs her that her beloved grandfather is ailing and needs her help, in more ways than one.

So begins an epic summer in which Adalyn needs to decide where she belongs, what she is supposed to do, and with whom she might find true love at last. All Once Upon a Montana Summer…

Adalyn was on her knees when she became aware that her cell was ringing.

“He-hello,” she said numbly, still staring down the hallway, the overly-sweet scent of rose petals wafting up her nose.

“Miss Stalling, this is Nathan in security, downstairs. We have a Mr. Chase Rollins at the front desk for you. Do you know him?”

She paused a moment, trying to make his words make sense. Chase? Here?

She shook her head, relieved at the strange thought of a friend by her side. “He showed you a picture ID, Nathan?”

“Yes!” She caught herself, feeling the flush of heat at her neck. “I-I know him. Let him come up, please. I’ll wait by the elevator. Oh, Nathan?” she said, “can you check your camera footage? Someone’s strewn rose petals down the sixth floor hall to my door.”

She heard the security guard’s muffled voice as he directed Chase to the elevators. “Now, what’s that you said, Miss? Something about rose petals?”

“Yes, all down my hallway.”

“Some Romeo in your life, then? Someone in the building with a code?”

“I…I don’t know.” Adalyn staggered to her feet and leaned against the wall, still staring along the length of the hallway, a chill running down her neck. What if the guy was still around? In her apartment? For the first time it registered. If he got to this floor, he could still be here. Nervously, she glanced over her shoulder, the hair on the back of her neck rising.

“Do you have a camera on my floor’s hallway, Nathan?”

“Can you keep an eye on me until Chase gets up here and we go into my apartment?”

“Yes. Miss. Is there someone’s code you want me to cancel? I take it that those flowers aren’t welcome?”

The guy was pretty new. Clearly, he was one of the few people in her building who hadn’t yet heard who she was. Or ever heard about the show and their signature flower.

“I never give out my code,” she said, her voice sounding pinched. She hung up on him, just as the elevator dinged and Chase stepped out.

“Chase!” She practically flung herself into his arms. It had been years since she’d seen her childhood friend, but she didn’t care. “I’m so glad you’re here!” After a moment’s hesitation, she felt him wrap his big arms around her, his broad hands warm on her back.

“Adi girl, it’s been too long,” he said. “I’ve been trying to get ahold of you, but you changed your number…”

“Three times,” she said, moving away from his welcome warmth. “I’m sorry. Only the security guards and a few people at the office have my most recent cell number these days. And I just found out an hour ago that you’d been trying to reach me. Gramps? How is he?”

“He’s been better, Adi. When I couldn’t reach you, I thought I’d better come. But maybe we can talk about it in your apartment?”

“Oh, sure.” But when she took a step toward it, she remembered the petals. She closed her eyes and rubbed them, not caring if she smeared her makeup. She was tired, so tired.

Hands on his hips, he looked down the hallway. “So, uhh…since you were on The One, is this how you’re welcomed home every day?” he tried to joke.

She shook her head, not able to muster a trace of a smile, despite her best intentions. “Nope. This is new. I appear to have picked up a stalker. First, in my parking garage at work, which wasn’t a huge surprise. But this…this is. As you’ve seen, it’s not exactly easy to get in this building.”

Chase’s smile faded and his eyes sidled down the hall and back to her. “Think whoever did it might be inside your apartment?” He was as calm as he’d ever been, even when he’d spied a grizzly bear in Glacier on a hike. Wary, but confident. Cautious, but secure. He was big now. A man. When they’d last parted—What? Six, seven years ago?—he’d been but a college senior.

“Nah,” she said, remembering herself. She was no teen, hiding in his shadow as they explored the woods. She was a marketing executive. A celebrity—be it a defamed one, of sorts. She moved down the hall in front of him, pulling out her key, and then ripping the rose from the handle, again tossing it behind her. “There’s no way he could get in.”

She tried to get her mind on a different subject than a potential stalker in her apartment. “Chase, I can’t believe you’d come all this way. Is Gramps really okay?”

Her heart seemed to halt, then pounded painfully.

Gramps. She hadn’t spoken to him in months. Not since the day that Adam broke her heart. That day she had called him, a total mess, and he’d done his best to console her over the phone. But then not again in the months since. Not even answering his phone messages, ignoring him as she’d done her parents and every other person in her life, seemingly lost in The One’s vortex.

“Adi, let’s go inside,” Chase said, taking the key from her hand and unlocking the door. “I’ll tell you everything once you can sit down. You’re looking a little pale.”

She swallowed hard, feeling more confident now with her old friend at her side. She didn’t want to hear what he’d come to tell her. Dreaded it, really. But with him, here, she felt more secure, more herself, than she had in months. Like she just might be able to handle more bad news.

The sweet fumes of crushed rose petals rose from beneath their feet. She did her best to ignore it, as he turned the key in the lock and shoved open the sleek door. It was with some relief that she saw that no more rose petals extended inside her apartment. Whoever it was had found a stopping point, at least there, at her threshold.

“Come in,” she said to Chase, who looked down the hall again, scanning every inch. As if he expected her stalker to appear. A shiver of fear ran down her back and panic made her heart pause, then pound. She practically hauled him inward, slammed the door and rammed the deadbolt into place, slightly panting as she leaned her hand against it.

She could feel his eyes on her before she turned.

She forced herself to turn, feeling the first tinges of embarrassment. 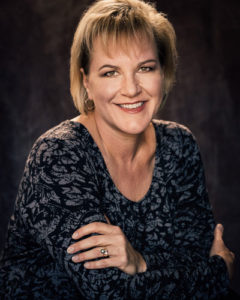 Lisa Tawn Bergren is the best-selling, award-winning author of more than 50 books, with over 3 million copies sold. She is currently at work on her historical romance series, The Sugar Baron’s Daughters (Keturah, Verity, Selah). Her most recent releases include her YA River of Time: California Duology (Three Wishes, Four Winds), the YA series Remnants (Season of Wonder, Season of Fire, Season of Glory), the River of Time Series (Waterfall, Cascade, Torrent, Bourne & Tributary, Deluge), and the children’s book God Gave Us Family.

Lisa’s time is split between managing home base, writing, and working on ducks with her husband, Tim (RMrustic.com). Tim’s a worship leader and duck-sculptor. They have three bigkids–-Olivia, Emma, and Jack.

The Bergrens make their home in Colorado Springs, Colorado. Visit her website! 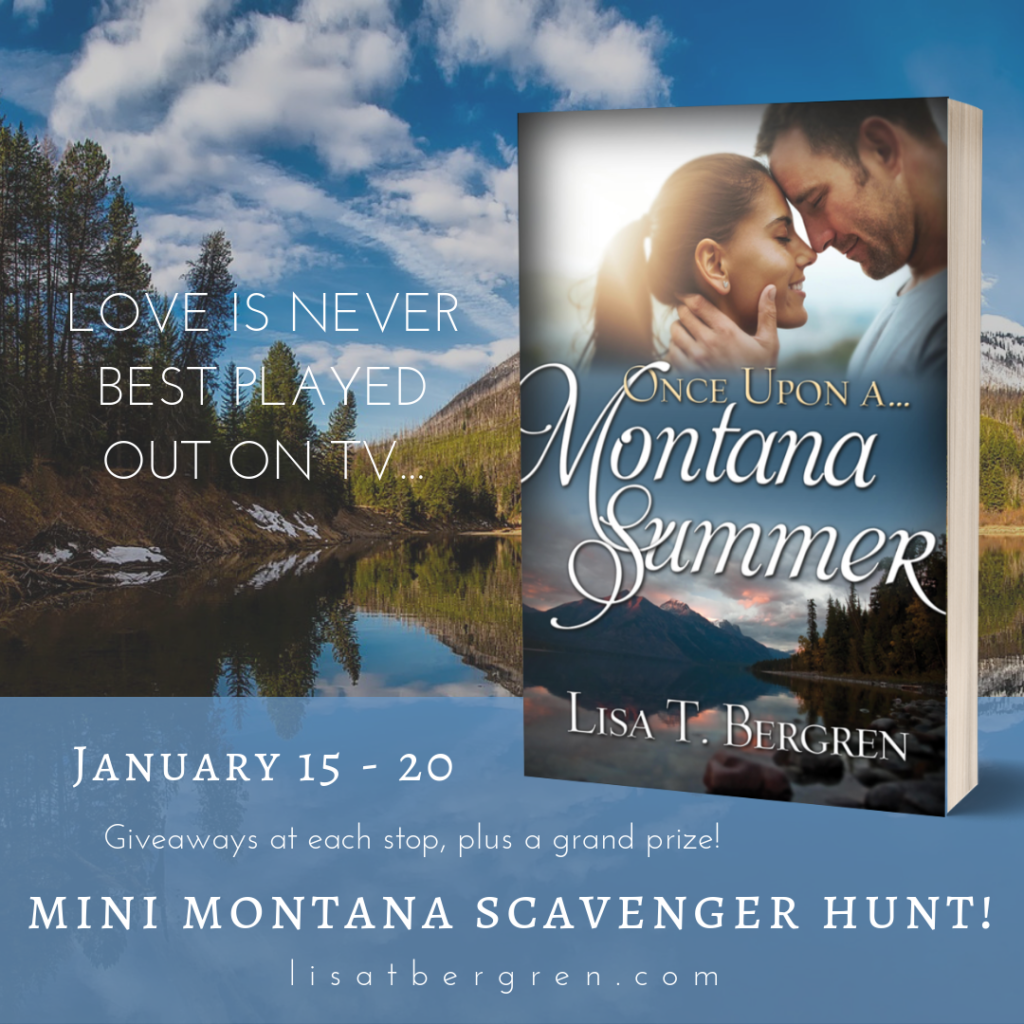 Winners will be drawn, posted at Lisa’s website, and notified via the email used to enter Rafflecopter on 1/22/19. If you are having trouble using the Rafflecopter form, you may email Lisa@BergrenCreativeGroup.com with all 5 answers and your full name before the end of the giveaway period.

, or Once Upon a Montana Summer

.
If the winner is outside of the United States, they will receive an e-copy of Once Upon a Montana Summer 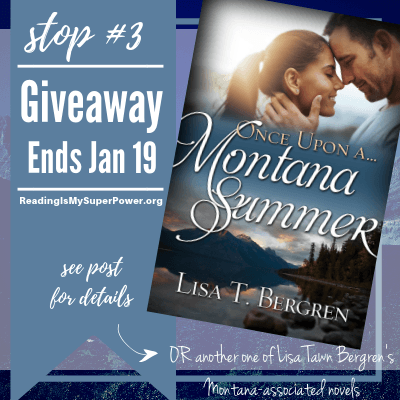 Head HERE for the next stop!