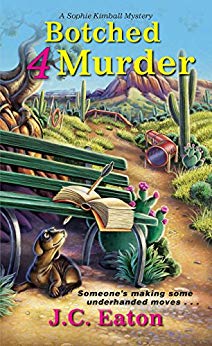 Sophie “Phee” Kimball is getting dragged into the drama again at her mom’s Arizona retirement community. A new board member wants to get rid of two golf courses and replace them with eco-friendly parks, and some of the residents are pretty teed off about it. On top of that, her mother’s book club friend Myrna is being pushed out of the bocce league. These seniors are serious about winning, and Myrna’s dragging them down. She’s so bad at bocce, in fact, that when a community mem.ber’s dead body is discovered while Myrna’s practicing for a tournament, she assumes it was one of her own errant balls that killed the woman.

But before Myrna can be tossed off the bocce court and into criminal court, the police find an arrow in the victim’s neck. It looks like this was no accident—and Phee and her investigator boyfriend Marshall will have to team up to bounce a killer into the slammer . . . 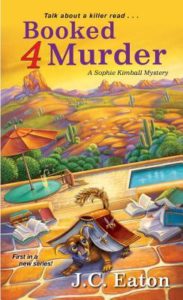 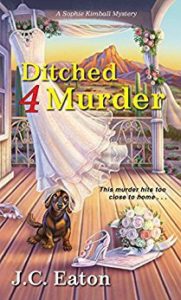 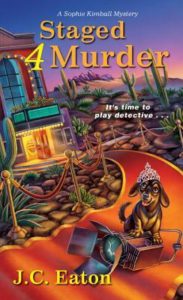 The parking lot looked like a tailgate party gone wrong. Small clusters of people gathered all over the place, making it impossible for anyone to get into a vehicle and drive out of there. I heard shouting, grumbling, and swearing. It was awful. Frankly, I’d seen movies depicting lynch mobs that were less intimidating.

“If we skirt around the blue Chevy, we’ve got a beeline to the other side of the building,” I said. “I don’t think the crowd’s made it there.”

“Good thing you knew about that parking area. Geez, I’ve never seen anything like this. Talk about hitting a nerve. Do you think that Sorrel woman knew how badly her proposal would be received?”

“From what little I know, I don’t think she cares. Worse yet, according to Herb, Sorrel Harlan will do anything in her power to get it passed.”

Just then someone shouted, “Vote no confidence! Vote that witch off the board!”

“Can they do that?” I asked. “Vote someone off the board?”

Marshall gave me a quick look as we hurried to the car.

“I’m not sure. I have no idea what the bylaws say. I know people can vote no confidence for a board, but usually those things take petitions and at least two-thirds of the signatures from all parties in the association. I read about that recently regarding a homeowners association in Phoenix. But Sun City West isn’t an HOA, it’s a municipality.”

“I can only imagine the conversations tonight at the Homey Hut and Curley’s. Not to mention what Bagels ’N More is going to be like during the breakfast hour tomorrow. Glad I’ll be at work and miles away from my mother.”

“When did they say the board would be voting on the proposal? It was hard to hear with everyone talking under their breath.”

“Next month, I believe. You don’t suppose it will really pass, do you? My gosh, I can’t fathom what that would do to the real estate market around here. Do you think Sorrel Harlan has some sort of ulterior motive in this?”

“Hard to say. Is she in the real estate business?”

I shook my head. “No. My mother told me Sorrel and her husband owned a boutique publishing company back east, but he gave that up when he accepted a position as a university librarian.”

“Boutique? I thought that was reserved for clothing and gift shops.”

“How’d your mother find out all of this? Wait! Wait! I shouldn’t ask. For a second I forgot who I was talking about. I should know by now that Harriet Plunkett has more connections than the chairpersons for the Democratic and Republican Committees combined.”

“Got that right, but she heard it from Lucinda Espinoza. Sorrel Harlan and Lucinda were in the same chair-yoga class a few years ago. Seems Sorrel gets very passionate about certain things and goes full steam ahead.”

“Going full steam ahead with this crowd might not be the best move. Do you hear them? We’ve almost rounded the corner, and the noise isn’t dying down. Come on, the car’s only a few yards away.”

Marshall was right. Either someone was getting that crowd pumped up, or it only seemed loud because everything else was so quiet around there.

“Take the first driveway on your left,” I said. “That way I can see what’s going on.”

I looked over Marshall’s shoulder and into the front parking lot. Judging from the size of the crowd, very few people had stayed in the social hall to listen to the discussion about paint colors. “From what I can see, it doesn’t look as if anything volatile is going on. I guess the voices are just loud. I’ll tell you one thing, though. I sure wouldn’t want to be in Sorrel’s shoes.”

“She kind of brought that on herself, don’t you think?”

“Uh-huh,” I mumbled. “Still, all of this is really unnerving. Especially for Sun City West. I mean, I don’t usually think of this place as a political hotbed or anything, but that lady literally poked a hornet’s nest.” 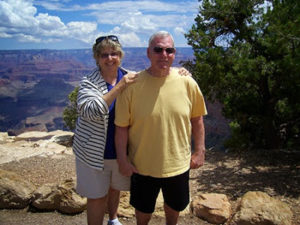 New York native Ann I. Goldfarb spent most of her life in education, first as a classroom teacher and later as a middle school principal and professional staff developer. Writing as J. C. Eaton, along with her husband, James Clapp, she has authored the Sophie Kimball Mysteries (Kensington) set for release in June 2017. In addition, Ann has nine published YA time travel mysteries under her own name. Visit the websites at www.jceatonauthor.com and www.timetravelmysteries.com

When James E. Clapp retired as the tasting room manager for a large upstate New York winery, he never imagined he’d be co-authoring cozy mysteries with his wife, Ann I. Goldfarb. His first novel, Booked 4 Murder

(Kensington) is set for release in June 2017. Non-fiction in the form of informational brochures and workshop materials treating the winery industry were his forte along with an extensive background and experience in construction that started with his service in the U.S. Navy and included vocational school classroom teaching.

4 responses to “Book Excerpt (and a Giveaway!): Botched 4 Murder by JC Eaton”