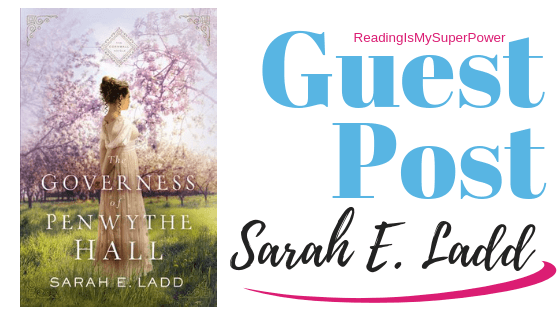 Yay! Sarah Ladd is here today!! I adore all of her books, and if you love Regency-era fiction & haven’t discovered her novels yet you are missing out! Her new book The Governess of Penwythe Hall releases from Thomas Nelson on April 16th & starts her new Cornwall Novels series. 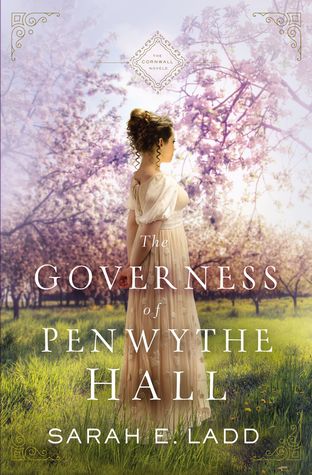 Cornwall was in her blood, and Delia feared she’d never escape its hold.

Blamed for her husband’s death, Cordelia Greythorne fled Cornwall and accepted a governess position to begin a new life. Years later her employer’s unexpected death and his last request to watch over his five children force her to reevaluate. She can’t abandon the children now that they’ve lost both parents, but their new guardian lives at the timeworn Penwythe Hall . . . back on the Cornish coast she tries desperately to forget.

Jac Trethewey is determined to revive Penwythe Hall’s once-flourishing apple orchards, and he’ll stop at nothing to see his struggling estate profitable again. He hasn’t heard from his brother in years, so when his nieces, nephews, and their governess arrive unannounced at Penwythe Hall, he battles both grief of this brother’s death and bewilderment over this sudden responsibility. Jac’s priorities shift as the children take up residence in the ancient halls, but their secretive governess—and the mystery shrouding her past—proves to be a disruption to his carefully laid plans.

Rich with family secrets, lingering danger, and the captivating allure of new love, this first book in the Cornwall Novels series introduces us to the Twethewey family and their search for peace, justice, and love on the Cornish coast.

So What’s the Book About?
by Sarah E. Ladd

As an author, I hear this question a lot.

Ah, such a short question — with so many possible answers!

Do I always know what a book is going to be about when I start writing it?

The answer to that question is NO!

Every author is different when they approach writing a new book.

Some authors know exactly what is going to happen in every chapter, even before the start writing the story. Others develop the story as they go (that’s me!).

Others know immediately what their characters are going to be like – their quirks, behaviors, and tendencies – then they write the story around the characters (who by this point are VERY real in their mind!)

Some authors start with a theme in mind and write the book around that idea. The select a theme up front, such as courage, loyalty, justice, overcoming prejudice, etc. and write a story to demonstrate the idea.

When I sit down to write a book, the plot is always the first piece of puzzle that snaps into place. What events happen that move the story along? How does the story move from Point A to Point B to Point C? I think this happens mostly because researching details around the plot takes a great deal of work up front. After I have a good grip on the plot I work on developing the characters. (How do they react to certain situations? How does that shape them?) 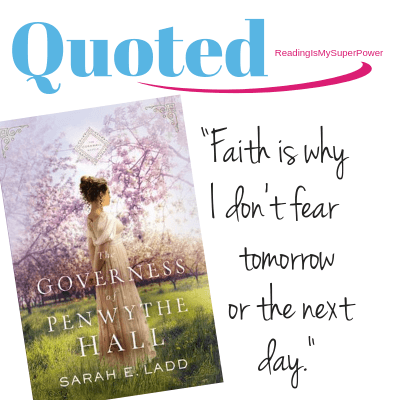 It is not usually until near the end of the writing process that the story’s theme become clear to me. Not until details are set – the action, the character responses – does that piece fall into place. When I get close to wrapping things up I ask myself – what did the characters learn?  And almost always, one particular lesson jumps off the page at me.

That lesson becomes the theme.

For The Governess of Penwythe Hall, the theme is overcoming fear with faith. The characters are put into situations where they must face something that terrifies them, and then they must overcome it using their faith.

Here are a few quotes from The Governess of Penwythe Hall that preview the theme:

“Fear knew no bounds and came in so many forms: fear of what the future held. Fear of more loss. Fear of opening her heart and finding pain. Fear that if she did pray, her words would not be heard.”

“Never are we promised an easy life, but we are promised that when we rely on Him for strength, we will have what we need to face our challenges.

“Fear is a bitter, vile enemy – it will rob you of today’s joys and steal your strength to fight for your purpose.”

“Faith is why I don’t fear tomorrow or the next day.”

It is my hope that when readers read this story, they will see how faith can help overcome fear, regardless of what the fear may be.

There is no right way or wrong way to write a story, but I love it when I learn lessons along with my characters.

As a reader, what part of the story – character, plot, etc. – is most important to you?

Thanks for spending a little time with me! 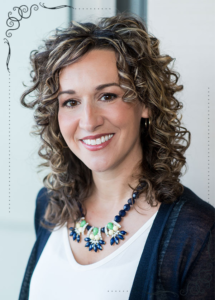 Sarah E. Ladd has always loved the Regency period — the clothes, the music, the literature and the art. A college trip to England and Scotland confirmed her interest in the time period and gave her idea of what life would’ve looked like in era. It wasn’t until 2010 that Ladd began writing seriously. Shortly after, Ladd released the first book in the Whispers on the Moors series. Book one of the series, The Heiress of Winterwood, was the recipient of the 2011 ACFW Genesis Award for historical romance. Ladd also has more than ten years of marketing experience. She holds degrees in public relations and marketing and lives in Indiana with her family and spunky Golden Retriever. 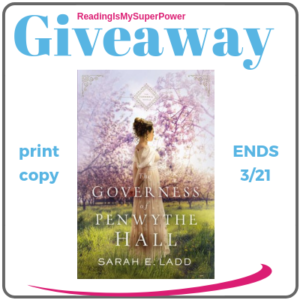 TNZ Fiction is offering a print copy of The Governess of Penwythe Hall to one of my readers! (US only) This giveaway is subject to Reading Is My SuperPower’s giveaway policies which can be found here. Enter via the Rafflecopter form below.

58 responses to “Guest Post (and a Giveaway!): Sarah E. Ladd & The Governness of Penwythe Hall”