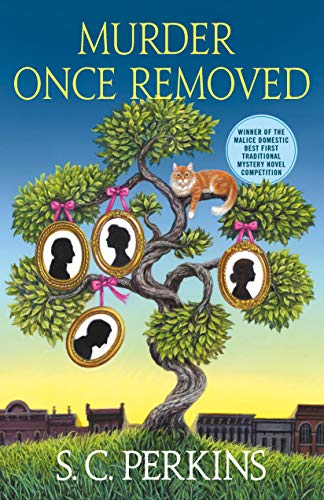 S.C. Perkins’ Murder Once Removed is the captivating first mystery in the Ancestry Detective series, in which Texas genealogist Lucy Lancaster uses her skills to solve murders in both the past and present.

Except for a good taco, genealogist Lucy Lancaster loves nothing more than tracking down her clients’ long-dead ancestors, and her job has never been so exciting as when she discovers a daguerreotype photograph and a journal proving Austin, Texas, billionaire Gus Halloran’s great-great-grandfather was murdered back in 1849. What’s more, Lucy is able to tell Gus who was responsible for his ancestor’s death.

Partly, at least. Using clues from the journal, Lucy narrows the suspects down to two nineteenth-century Texans, one of whom is the ancestor of present-day U.S. senator Daniel Applewhite. But when Gus publicly outs the senator as the descendant of a murderer—with the accidental help of Lucy herself—and her former co-worker is murdered protecting the daguerreotype, Lucy will find that shaking the branches of some family trees proves them to be more twisted and dangerous than she ever thought possible.

My grandfather gave me a love of history and family history, and I’m fascinated with the field of forensic genealogy and ancestry detectives. So, picking up Murder Once Removed to review was a no-brainer!

Before I go too much farther, I must mention my absolute favorite character in the story – Lucy’s cat Neil Patrick Housecat. Even though I rarely love cats – in fiction or in real life – the name won me over immediately. How can you not love a cat named for NPH?

The rest of the characters didn’t quite grow on me yet – they seem immature for their 30-something ages but maybe I’m just getting old LOL. I am intrigued by the potential romance budding between Lucy and Ben (the FBI agent), and I did really enjoy Big Flaco of Big Flaco’s Tacos too. He’s a great fatherly figure to Lucy and just a bigger than life personality that, interestingly, is the only character to show any noticeable depth.

While the characters may not have grabbed me, the mystery totally did. A murder over 100 years ago, an old daguerreotype of the body, two possible suspects (from the past) with big ramifications in the present. And at the center of it all is Lucy and her genealogical research. I enjoyed a lot of the technical details since I love this field but at times it did bog down the story a bit, especially for people who aren’t as into ancestry detectives. (Also, I need that chart that Lucy keeps handy that makes figuring out the whole first/second/third cousins once/twice/three times removed labyrinth.)

Bottom Line: This isn’t my favorite cozy mystery I’ve read lately, but it has enough elements that I did like that I’ll definitely keep following the series. The historical mystery that affects the present is well-plotted and an intriguing premise all the way around. However, some of the overly-detailed descriptions of trivial information (clothing, partying, etc.) simply took up too much space in the narrative without contributing much overall and I ended up skimming chunks of the story at times. Mixed feelings about this book, but I did like it – and Neil Patrick Housecat for the win! 😉


Reviewer’s Note: Readers may want to be aware that there is rather frequent profanity in this book. 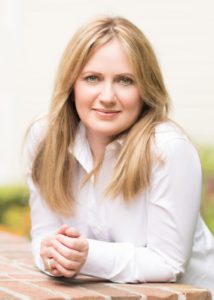 S.C. Perkins is a fifth-generation Texan who grew up hearing fascinating stories of her ancestry and eating lots of great Tex-Mex, both of which inspired the plot of her debut mystery novel. Murder Once Removed was the winner of the 2017 Malice Domestic Best First Traditional Mystery competition. She resides in Houston and, when she’s not writing or working at her day job, she’s likely outside in the sun, on the beach, or riding horses.

This giveaway is hosted by Great Escape, not RimSP
Follow along with the tour HERE 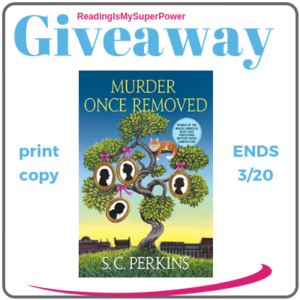 One of my readers can also win a print copy of Murder Once Removed! (US only) This giveaway is subject to Reading Is My SuperPower’s giveaway policies which can be found here. Enter this individual giveaway by commenting on this post before 11:59PM Eastern on March 20th.

What about you? Do you like researching your ancestry/family history?

11 responses to “Book Review (and a Giveaway!): Murder Once Removed by S.C. Perkins”