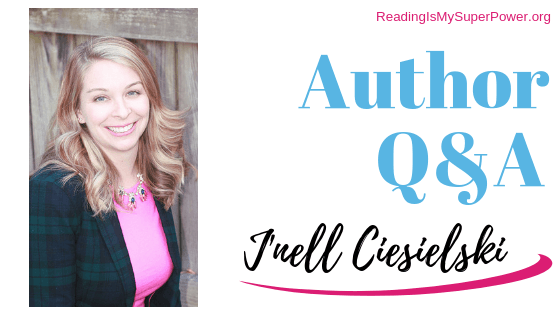 It’s always a pleasure to chat with J’nell Ciesielski so I’m delighted that she’s here today to talk about her new book, The Songbird and the Spy!

Believing she was born in the wrong era, J’nell Ciesielski spends her days creating heart-stopping heroes, brave heroines, and adventurous exploits in times gone by. Winner of the Romance Through the Ages contest and Maggie Award, J’nell can often be found dreaming of a second home in Scotland, indulging in chocolate of any kind, or watching old black and white movies. Born a Florida girl, she now calls Virginia home, along with her very understanding husband, young daughter, and one lazy beagle. 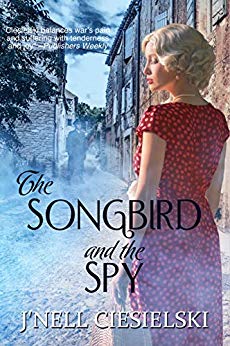 Readers will devour each moment leading up to the satisfying ending. – Publishers Weekly

As shells explode over Nazi-occupied France, American music student Claire Baudin is trapped behind enemy lines, struggling to protect her identity. Singing as a barmaid while she plans her escape, a handsome Third Reich captain threatens everything she knows to be true about the enemy.

Nazi Captain Michael Reiner isn’t who he claims to be. A British language expert turned spy, he discovers the truth about Claire, but he knows the importance of a secret. Struggling to resist his attraction to the songbird, he’s determined to complete his assignment, no matter the cost. His cover is threatened when a ruthless female Gestapo officer arrives, hunting Resistance fighters. The raid forces Michael’s hand: complete the mission or save Claire.

As the war threatens to tear them apart, they must rely on each other for survival. Is there hope—and a future—for an American songbird and a British spy?

Hi J’nell! Welcome back to the blog!

J’nell: Dogs all the way. Beagles to be precise. I grew up with them and it’s the only kind I’ll have.

Carrie: I think beagles are just the cutest!

J’nell: Music. I get lost in songs, but audiobooks tend to put me to sleep.

J’nell: Haha. The eternal debate, but I happen to be on the right side. Over.


Carrie: For a minute there I was sure you were going to agree with me that ‘under’ is the right way to put toilet paper on the tube. Sadly, I remain in the minority … lol

J’nell: Print. There’s something about holding a book in your hands and turning the pages. Plus, I retain the story better that way.


Carrie: I have developed a love for ebooks (easier to read at night, easier to travel, easier to enlarge font for tired eyes) BUT i maintain that there are certain books that just MUST be read in print.

J’nell: To be able to speak any language. Perhaps not as cool as flying, but I like to travel and being able to speak the host language would be so beneficial. No more guessing where the bathroom is.

Carrie: That would be amazing!

The Bookshop Around the Corner-charming, witty, and Scottish

The Gentleman from Moscow-poetry in novel form

The Ghost and Mrs. Muir-ghostly romantic

Carrie: man, I’ve read none of these. I need to up my game here!


J’nell: That I’m super girly because everything is pink or floral, old fashioned because I carry a hankie instead of tissues, neat freak because everything has its appropriate place, and enjoy clean breath with a fresh pack of gum (spearmint or peppermint).


Carrie: I am never without gum. It’s a staple for me. lol.


Q: Were there any songs that inspired you as you wrote The Songbird & The Spy?


J’nell: Other than the obvious crooners and Parisian favorites like Bing Crosby, Charles Trenet, and Edith Piaf, the number one song that inspired me during Songbird was ‘Dream A Little Dream of Me.’ The Mama Cass version because it’s the best 🙂 . It became Claire and Michael’s theme song.


Q: If Hollywood wanted to produce The Songbird & The Spy as a movie, who would you want to be cast as the lead roles?

J’nell: Oh, that’s easy! Since I was inspired by Michael Fassbender’s character, I imagine only him to play Captain Michael (see what I did there?) Reiner. Claire would be played by Melanie Laurent because she was the actress who played opposite Michael Fassbender in the movie that inspired the story.

J’nell: “Stop off to the chaplain before you leave and beg forgiveness from the Almighty for all the ‘Heil Hitler’s’ you’re about to spit out.”

Am I allowed to say that I love this quote because it’s so clever? Is that too arrogant? I find it sums up Michael’s predicament rather neatly without beating the point to death.

Carrie: You’re totally allowed to say that – love it!

J’nell: The Night Fox is a novella coming out later this year. Set in Scotland, a female thief falls in love with the very man determined to catch her. And does he ever 🙂

After that I’ve got another WWII story about two glamorous socialite sisters who find love in Nazi occupied Paris. Hopefully coming out next year! 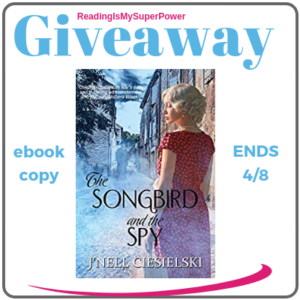 J’nell Ciesielski is offering an ebook of The Songbird and the Spy to one of my readers! Open internationally, except where prohibited by law. This giveaway is subject to Reading Is My SuperPower’s giveaway policies which can be found here. Enter via the Rafflecopter form below.

13 responses to “Author Interview (and a Giveaway!): J’nell Ciesielski & The Songbird and the Spy”