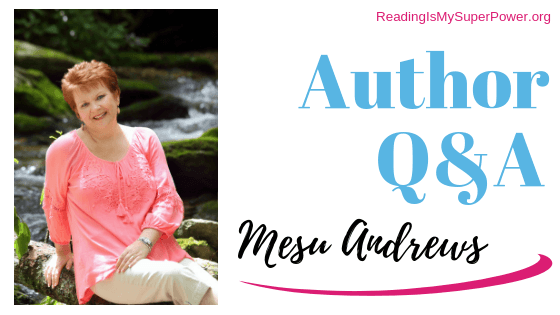 I absolutely adore Mesu Andrews, and I’m thrilled that she’s here today to chat about her newest novel Of Fire and Lions (WaterBrook, March 5)

Mesu Andrews is the Christy Award winning author of Isaiah’s Daughter and has received numerous accolades for her other novels including Love Amid the Ashes, The Pharaoh’s Daughter, and Miriam. Her deep understanding of and love for God’s Word brings the biblical world alive for readers. Many of her faithful readers are members of her launch team—Mesu’s Biblical Fiction Fans (BFFs)—and offer their time and service to promote God’s word through story. Andrews lives in North Carolina with her husband Roy and enjoys spending time with her growing tribe of grandchildren. For more information, visit www.mesuandrews.com. 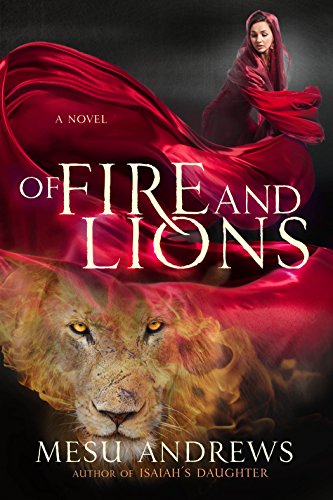 The Old Testament book of Daniel comes to life in this novel for readers of Lynn Austin’s Chronicles of the Kings series or Francine Rivers’ Mark of the Lion series.

Survival. A Hebrew girl first tasted it when she escaped death nearly seventy years ago as the Babylonians ransacked Jerusalem and took their finest as captives. She thought she’d perfected in the many years amongst the Magoi and the idol worshippers, pretending with all the others in King Nebuchadnezzar’s court. Now, as Daniel’s wife and a septuagenarian matriarch, Belili thinks she’s safe and she can live out her days in Babylon without fear–until the night Daniel is escorted to Belshazzar’s palace to interpret mysterious handwriting on a wall. The Persian Army invades, and Bellili’s tightly-wound secrets unfurl with the arrival of the conquering army. What will the reign of Darius mean for Daniel, a man who prays to Yahweh alone?

Ultimately, Yahweh’s sovereign hand guides Jerusalem’s captives, and the frightened Hebrew girl is transformed into a confident woman, who realizes her need of the God who conquers both fire and lions.

Hi Mesu! Welcome back to the blog!

Q: What do you love about writing biblical fiction? Why did you choose to explore the book of Daniel for this novel?

Mesu: I LOVE the research! It’s my excuse for sitting around all day and studying the seemingly insignificant details of God’s Word. Those seemingly insignificant details are like filling in black-n-white sketches with a box of 64-Crayolas. I’m such a Bible-nerd! I love all those historical facts: archaeological findings, Hebrew words, cultural habits. It’s through that research that I’m able to determine what stories are possible to write and which ones I really shouldn’t. For years I thought Daniel was sort of “off limits” because in the little bit of research I’d done, many scholars believed Daniel and his friends were made eunuchs when exiled to Babylon. Why write a novel if there’s can’t be a romance thread? When I read through the Bible a few years later, I was captured again by Daniel’s story and delved deeper into research. This time I discovered the Hebrew word cariyc—translated eunuch—was also used in Genesis to describe Potiphar, Pharaoh’s Captain of the Guard. We know Potiphar was married, and even though his wife wasn’t happy with him, he was surely not a eunuch—at least not in the sense I thought of eunuchs. Suddenly, Daniel became the Bible’s most eligible bachelor, and I really enjoyed imagining what his fictional wife might have been like!

Carrie: haha – this is one of the many reasons I love you. Daniel as the Bible’s most eligible bachelor is just marvelous 🙂


Q: Most people are familiar with Daniel and especially the story of the lion’s den, but you dive deeper, imagining his humanity and his family. What inspired the creation of his wife’s character, Belili?

Mesu: I began with what Scripture told us of Daniel—that he was from either the royal family or nobility (Dan. 1:3). I researched righteous King Josiah’s sons, and found the only one who didn’t become a wicked, idolatrous king of Judah was his first son, Johanan. In fact, Scripture never mentions Johanan other than to record him as Josiah’s firstborn. Most commentators presumed Johanan was killed in the same battle that took Josiah’s life, so I assigned Daniel to Johanan, making him King Josiah’s grandson and the only son of Judah’s crown prince. Daniel would have been quite young—perhaps six years old or so—if his father died in that battle. I surmised he might mature quickly and take on more responsibility if left as an only son to care for his royal mother.

Dan. 1: 4 tells us Daniel was chosen because he was also young, handsome, and intelligent. I would imagine he had a strong drive to protect—again because of his father’s early death—so I determined his love interest should be a “damsel in distress.” She should be either a Hebrew servant who shared his faith or an abused Babylonian who he won over to faith in Yahweh. To ratchet up the tension, I sort of made her both. She was a Hebrew servant girl in the beginning, but because of harsh circumstances, she began serving pagan gods. To make her “worthy” of a man so refined by Daniel’s challenges and steadfast faith, Belili needed an equally strong personality and had to endure as much (or more) difficulty than Daniel. When she responded very differently to her struggles than Daniel, he judged her harshly, which I hope gave readers more to ponder about a character we’ve likely idolized since childhood. Daniel is such a rich, deep, inspirational character that I tried to make his fictional wife equally thought-provoking.

Carrie: This is so fascinating – to see your process too. And I love love love that you begin with what Scripture tells us. So important to do when writing Biblical-era fiction, especially about Scripture & people who really did exist.


Q: You include a time slip in the book to tell Daniel and Belili’s story across several decades. What was it like keeping track of more than one timeline while also keeping the storyline fluid and easy to follow?

Mesu: Nearly impossible! LOL! I have such HUGE respect for my author friends, Melanie Dobson and Susan Meissner, who write a steady diet of time slip novels and seamlessly flow between two storylines decades apart. I didn’t realize the level of difficulty until my first draft was such a mess and my editor helped me limit the back-n-forth into a more manageable flow. I think this technique served the story well, however, enabling us to cover the huge time (seventy years), while accentuating the richness of four very distinct cultures (Hebrew, Babylonian, Median, and Persian).


Carrie: I love reading time slip novels but i imagine it does get tricky managing the back-n-forth. Definitely a very effective plot strategy for this kind of timeline & culture-mix though, yes!


Q: What do you hope readers take away from Of Fire and Lions?

Mesu: As with every book I write, I want readers to rush back to their Bibles to see what came from my imagination and what was gleaned from God’s Word. Secondly, with this book in particular, I hope folks will see the humanness of the Bible heroes we’ve heard about since we were children. Daniel was an adolescent taken captive to a foreign country where he experienced fear, doubts, anger, and was a little arrogant sometimes. Shadrach, Meshach, and Abednego weren’t mentioned after their heroic stand-off at the fiery furnace. Was it because they died soon after or because they were swallowed up by the glitz and glitter of Babylon’s pleasures? We don’t know, but I hope Of Fire and Lions gives a plausible alternative to the two extremes I mentioned. The biblical accounts are snapshots of a few moments in characters’ lives that God uses to teach us vital lessons. But these characters were real people who coped with the daily-ness of their faith just like you and me. I think that’s when we relate to best and what I want everyone to take away from any book I write.

Mesu: I’m so excited about the next project, Isaiah’s Legacy—the sequel to Isaiah’s Daughter, that continues King Hezekiah (Hezi) and Queen Hephzibah’s (Zibah’s) story with the birth of their only son Manasseh. If you’ve read 2 Kings 21 or 2 Chronicles 33, you know King Manasseh’s story is filled with sin and bloodshed beyond any king before or after him. Why write his story? Because it is literally the greatest prodigal story God ever recorded! I sobbed through the last two chapters! The good kind of ugly cry, stop typing, get-on-my-knees-and-praise-God kind of sobbing! Perhaps most exciting of all—I’m hoping to celebrate Isaiah’s Legacy release (March 2020) in Israel with our Experience THE BOOK Tour!! We’ll get to explore some locations mentioned in my books and experience THE BOOK in the Land of God’s Promise! Lots of amazing opportunities in the coming year! 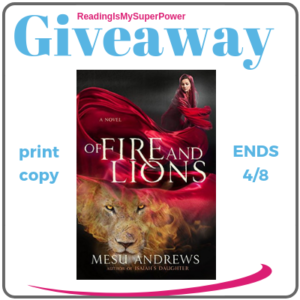 WaterBrook is offering a print copy of Of Fire and Lions to one of my readers! (US only) This giveaway is subject to Reading Is My SuperPower’s giveaway policies which can be found here. Enter via the Rafflecopter form below.

16 responses to “Author Interview (and a Giveaway!): Mesu Andrews & Of Fire and Lions”