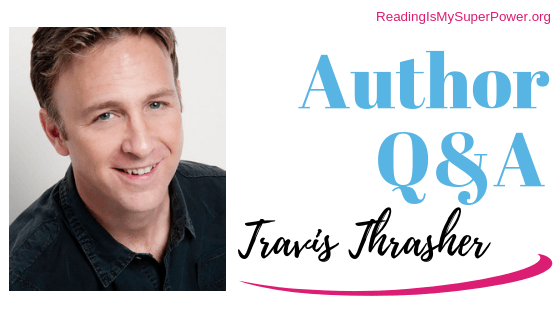 I’m honored to have Travis Thrasher as my guest today on the blog to talk about his new thriller American Omens: The Coming Fight for Faith (WaterBrook, February 12)!

Travis Thrasher is the author of more than 20 works of fiction, including collaborations with musicians like Jimmy Wayne and Thompson Square. Thrasher lives with his wife and three daughters near Chicago. 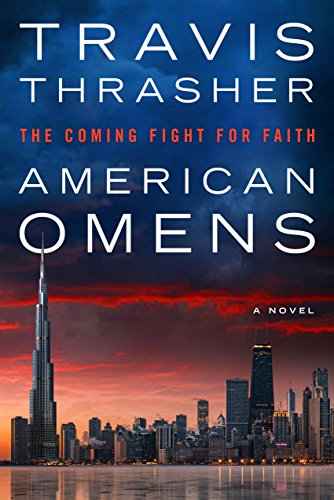 In this taut thriller that depicts a future where belief is dangerous, faith is deemed hatred, and a group of powerful elite keeps watch, the Reckoner has come to wake up America.

The year is 2038 and Cheyenne Burne is a brilliant young programmer working for Acatour, the world’s top technology firm. Her father converts to Christianity, and he suddenly disappears without a trace. When a stranger hands Cheyenne a coded message that sends her on a collision course with a clandestine group of believers, she must put her life in the hands of those following a man known only as the Reckoner. He claims he wants to bring back true faith in Christ to America and also reveal the forces behind the disappearances of the many renowned people who publicly declared their Christian faith.

Operating in the shadows and living off the grid, this mysterious prophet assembles a ragtag team–including a former bookseller whose store was shut down for selling prohibited books–to help him take the battle for transparency to the top. With a ruthless FBI agent closing in, can Cheyenne and the others expose the truth and lead a return to God in America before it’s too late?

The spiderweb cracks in the windshield made it easy to spot the old Chevy SUV in the parking lot. Jon Dowland stood next to the car and examined the black duct tape that covered a hole the size of his fist on the passenger side. One of the shots he’d fired last night had obviously connected, but it hadn’t stopped the driver from disappearing once again. Even though the Chevy looked abandoned, Dowland knew the man wasn’t likely to be far away.

The morning sun began to leak out over the Indiana countryside. Dowland had forgotten how bleak the Midwest could be in winter. The wind was cold and cut through him as he walked toward the motel sitting right next to the gas station and former truck stop in the middle of nowhere. In one of those dingy rooms, the man he’d been hunting was probably wide awake, wasting his time by praying. This little game had been interesting for the last few months, but Dowland was done with it now. Nearly getting run down on an Indiana highway by some lunatic calling himself the Reckoner had used up what little patience he had.

It took only two hundred dollars to bribe the bored and pimply-faced kid behind the front desk to give him a room number. A simple direct exchange, or DE, that took two seconds. Dowland could have shown his FBI credentials, but he never did that. If anybody came around asking, which wasn’t likely here of all places, he didn’t want the FBI to be a part of any conversation.

Hi Travis! Welcome to the blog!

Q: Tell us about your new book, American Omens.

Travis: American Omens is a thriller set in the future that explores the threat of Christianity in the United States being subverted and Christians being ostracized for their beliefs.

Carrie: Something that seems more likely every day…


Q: What are some of the threats to authentic faith, even now?


Travis: I believe the number one threat (and I’m looking at myself) is the lack of urgency. The character called “Reckoner” in the book is someone who is absolutely urgent with his faith. Someone who is doing something radical about it. I see the lack of urgency as being detrimental, because we’re not doing what [1 Peter 5:8] tells us to do. We’re not staying alert. We’re complacent. We binge-watch the new series on Netflix and then go to our girls’ soccer game and we see our friends at church and we give to the needy and we’re in our own little bubbles both in our lives and online. We don’t speak out against those with opposite views because we’ll be labeled and criticized. We don’t read the bible. We’re very lukewarm. I believe that allows Christianity to continue to be watered down. If this happens, then one day if true authentic Christian faith begins to be outlawed, who will even notice?


Carrie: Also reminds me of the verse in Revelation about being neither hot nor cold.


Q: You tell the story from multiple points of view, some of whom do not know each other for the majority of the book. Why did you decide to frame the story this way? Which point of view was your favorite to write?

Travis: I wanted to tell this story from three viewpoints: a believer who is struggling with his faith, somebody who doesn’t have faith and isn’t really thinking about it, and somebody very much opposed to having a faith. So you have a believer, a searcher, and a nonbeliever. I thought these three journeys would be interesting to watch unfold.

I really love all these characters. My favorite might be the person who doesn’t have a viewpoint, the radical Christian who calls himself Reckoner. It was fun to write about him and see his character come to life.


Q: The story is set in the year 2038. What was it like brainstorming and writing about technology 20 years from now?


Q: Which of your characters did you most resonate with?

Travis: This is obvious for anybody who even remotely knows me. Will is a character who is a lot like myself. There are many similarities, yet there are places where we’re very different, too. It’s fun to be able to give myself better or worse traits or circumstances in life.

Carrie: oh that would be interesting!


Q: We love books around here – What are you currently reading?

Travis: I’m usually reading about a dozen books or more at the same time. But here are a few: George Lucas: A Life by Brian Jay Jones. Dark Debts by Karen Hall. Small Fry by Lisa Brennan-Jobs.

Carrie: how do you keep up with a dozen books at once?? lol! I’m a one-book-at-a-time reader… but quickly… so it all evens out 🙂 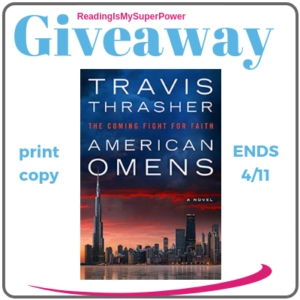 WaterBrook is offering a print copy of American Omens to one of my readers! (US only) This giveaway is subject to Reading Is My SuperPower’s giveaway policies which can be found here. Enter via the Rafflecopter form below.


What about you? What interests you most about this novel?