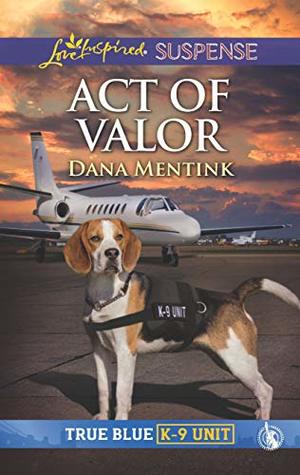 When airline employee Violet Griffin encounters several suspicious passengers, she’s thrust into the crosshairs of a drug smuggling operation. NYPD officer Zach Jameson and his drug detection beagle, Eddie, can tell this is no small-time threat. Someone’s gunning for Violet, and after recently losing his brother, Zach refuses to lose her, too…especially now that she’s gone from friend to the woman he’s falling for. 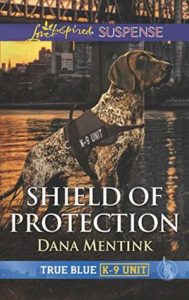 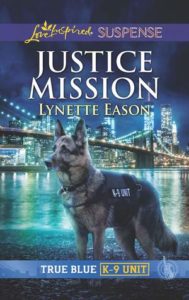 Any time I have the opportunity to read a book by Dana Mentink, I jump at the chance, and her romantic suspense novels are my faves. The action leaps off the page and takes me along  for the knuckle-whitening ride, picking up some spot-on humor and delicious romance as we go.

Act of Valor is the second book in the latest multi-author continuity K-9/law enforcement series from Love Inspired Suspense, and while it will certainly grab and keep your attention even if you haven’t read the first book I do strongly encourage you to go back and pick up Justice Mission by Lynette Eason to get the full effect. The story arc that starts in that first book continues in this one – and escalates a bit eventually as well. Also, you won’t really understand the emotion that everyone is still carrying with them in book 2 until you’ve read book 1.

There’s also a ‘new’ story line in Act of Valor, one that I’m certain has implications for the case they’re still investigating from Justice Mission too. The action hits the ground running and doesn’t ease up much until the very end. Violet’s life is in danger from the very first chapter, allowing plenty of swoony moments where Zach holds her close and shields her from flying bullets and surly bad guys and the like. However, lest you think Violet is a shrinking… well… violet… girlfriend holds up well under pressure and gives strong-but-still-feminine women a good name. I really like how Mentink crafted both of these characters – with a good balance of strength, vulnerability, tenderness, and wit.

For this friends-to-more romance, all that heart-pounding edge-of-your-life suspense also allows more than a few opportunities for clueless Zach to see what’s right in front of him – and some swoonilicious emotionally-layered smooches. The tenderness these two exhibit toward each other speaks to their long history as best friends and is only magnified all the more as romantic feelings begin to factor in more acutely than ever. Zach’s faith battle is also nicely layered and authentic, and I so appreciate how the author didn’t tie up his struggles with a neat red bow but let him continue to process things in a way that makes sense for his character.

And let’s not forget some of that classic Mentink humor. The subway scene – even as Zach and Violet are running for their lives yet again – is HILARIOUS and definitely one of my favorite scenes in the book. Another fave moment is when adorable Eddie (Zach’s drug detection beagle) gets into some shenanigans while left alone in Violet’s apartment (during another fight for their lives against these Houdini-esque bad guys). Zach’s ensuing conversation with him, as well as Eddie’s doleful reactions, left me still chuckling for a while. 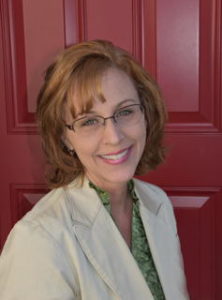 Dana Mentink is a two time American Christian Fiction Writers Carol Award winner, a Romantic Times Reviewer’s Choice Award and a Holt Medallion winner. She is a national bestselling author of over forty titles in the suspense and lighthearted romance genres. She is pleased to write for Harlequin’s Love Inspired Suspense, Barbour, and Harvest House. Dana was thrilled to be a semi-finalist in the Jeanne Robertson Comedy With Class Competition. Besides writing, she busies herself teaching third grade. Mostly, she loves to be home with Papa Bear, teen bear cubs affectionately nicknamed Yogi and Boo Boo, Junie, the nutty terrier, and a chubby box turtle.

Cops and killers and beagles, oh my! It was a ton of fun writing the second book in the new True Blue K-9 Continuity series. First of all, I had the honor of working with some AMAZING authors. (It’s challenging creating a world together and keeping all those details straight!) I had the privilege of following the amazing Lynette Eason, so that’s always a plus! Second, I learned all about the astonishing world of beagles! Those critters are just amazing. For instance, the original beagles were tiny, only 8 inches tall and could be carried in a pocket, which is why they called them Pocket Beagles. I need one of those! The name beagle comes from the French, which is translated “wide throat” or “loudmouth.” This is well earned by Eddie in my story, who will occasionally let loose with the trademark baying. The beagles small size, general friendliness, and ferocious scent drive, make it the perfect dog to sniff around airports and get into compact spaces. Eddie enjoys doing just that with Zach, his handler and best friend. He earns those gourmet treats that Zach bakes up for him. Best of all, Eddie was rescued from death before he became a canine cop star! It’s just awesome when you can twine fact with fiction to come up with a tail wagging suspense story! I hope you enjoy the second installment in the series! 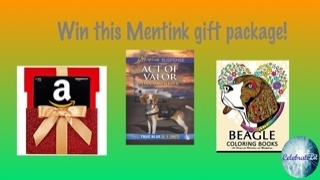 To celebrate her tour, Dana is giving away a grand prize of a print copy of the book, a beagle coloring book, and an Amazon gift card!!

13 responses to “Book Review (and a Giveaway!): Act of Valor by Dana Mentink”