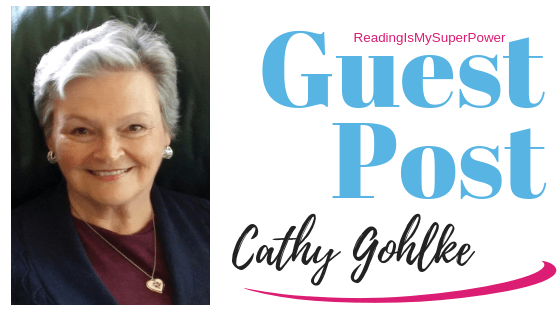 I am thrilled today to welcome Cathy Gohlke to the blog! I had the privilege of meeting her at the 2019 Christian Fiction Readers Retreat & she was as sweet as I imagined she would be. Her new book The Medallion releases TOMORROW from Tyndale House! 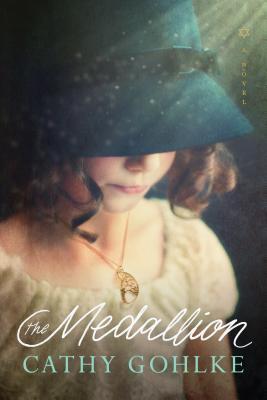 For fans of bestselling World War II fiction like Sarah’s Key and The Nightingale comes an illuminating tale of courage, sacrifice, and survival, about two couples whose lives are ravaged by Hitler’s mad war yet eventually redeemed through the fate of one little girl.

Seemingly overnight, the German blitzkrieg of Warsaw in 1939 turns its streets to a war zone and shatters the life of each citizen–Polish, Jewish, or otherwise. Sophie Kumiega, a British bride working in the city’s library, awaits news of her husband, Janek, recently deployed with the Polish Air Force. Though Sophie is determined that she and the baby in her womb will stay safe, the days ahead will draw her into the plight of those around her, compelling her to help, whatever the danger.

Rosa and Itzhak Dunovich never imagined they would welcome their longed-for first child in the Jewish ghetto, or that they would let anything tear their family apart. But as daily atrocities intensify, Rosa soon faces a terrifying reality: to save their daughter’s life, she must send her into hiding. Her only hope of finding her after the war–if any of them survive–is a medallion she cuts in half and places around her neck.

Inspired by true events of Poland’s darkest days and brightest heroes, The Medallion paints a stunning portrait of war and its aftermath, daring us to believe that when all seems lost, God can make a way forward.

One bright summer’s day, a friend sent me a Facebook message asking if I’d seen a news article. Her link led me to an amazing story: the discovery and unearthing of a WWII escape tunnel in Lithuania by an international team of archaeologists.

Goose bumps ran up my arms as I read. Something about it rang familiar—as if I’d been there before. 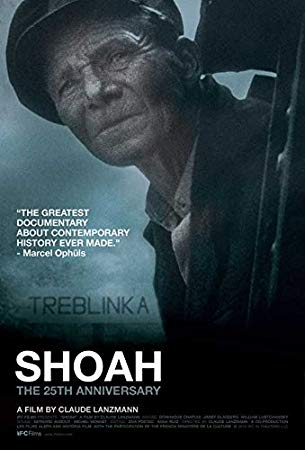 And then I remembered. Years before, while doing Holocaust research, I’d viewed a powerful documentary, Shoah, in which Claude Lanzmann, over an eleven-year period, had traveled the world to research and interview surviving Holocaust camp inmates, SS commandants, and Jewish, German, and Polish eyewitnesses of the “final solution”—Nazi efforts to systematically exterminate human beings. Shoah was first presented in French (1985) and later in English (1999).

The documentary includes over nine hours of heart-wrenching, mind-boggling interviews and tours, including the testimony of men who’d been assigned the unthinkable in the Ponary Forest.

When it appeared that the Russians were closing in and would retake Lithuania, Heinrich Himmler, for fear that Nazi wartime atrocities would be discovered, ordered eighty Jewish men to dig up and burn bodies (approximately 70,000 Jewish and 30,000 others) that the SS had shot and dropped into mass graves. Details of the assignment were too horrific to comprehend. Prisoners knew that they, too, would be murdered once their gruesome labor ended so that there would be no witnesses. It was then that the prisoners contrived to dig, by night, a tunnel from their pit of imprisonment to the forest’s edge, and escape. They had only their hands, spoons, and a few electricians’ tools to do the job.

Until new technology (using radar and radio waves to scan the area) verified the existence of the tunnel in 2016, the story had been relegated to the stuff of myths—an escape tale so fantastic people found it hard to believe.

With the tunnel’s discovery, old interviews were resurrected and the children of Holocaust heroes rejoiced that their parents’ accounts were confirmed. Nova aired a documentary revealing the scientists’ search and tunnel discovery in 2017.

Past interviews included the story of a man (Isaac Dogim, sometimes spelled Itzhak Dugin) who, in the process of digging up bodies, found those of his family. Some sources reported that he found his mother, three sisters, and their children. Some sources said it was his wife and sisters. According to the story I read, he had identified the partially decomposed bodies of some of his family by their clothing and his wife by the medallion she wore around her neck—a medallion he’d given her on their wedding day. 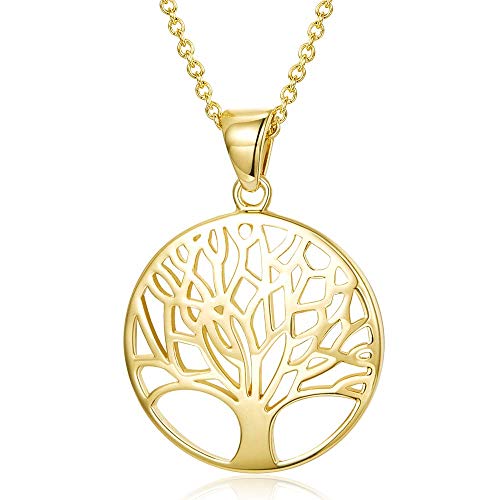 I remember after reading the newspaper account, my legs trembled with the realization that this was what I would write next. I didn’t know how my fictional story would begin or end, or even the story’s purpose; I only knew that I was angry such carnage had ever taken place, that it must not happen again, and that I couldn’t get the image of this man’s horrific, heartbreaking discovery of his wife out of my mind. In minutes, I could see and hear some of the characters in my head, and a picture of the medallion had formed clearly in my mind. I shared the newspaper story with two author friends and said, “This is my next story, and what if the medallion is the Tree of Life?”

As I reread transcripts containing Itzhak Dugin’s (or Isaac Dogim’s) and other interviews, and began researching details, I asked the Lord to show me the greater purpose of this story—what in this would bring Him glory and what would He teach me through its writing? What would bless and encourage readers?

For several months, my sister and others had sent me links to Irena Sendler’s story. Irena was a Polish Catholic social worker who accepted the challenge to develop a network within Żegota (the underground Polish Council to Aid Jews) to rescue children during WWII. Despite terrible risks, they smuggled 2,500 Jewish children from the Warsaw Ghetto and certain death at the hands of the Nazis, then hid them in Polish homes, convents, churches, and hospitals until the end of the war. 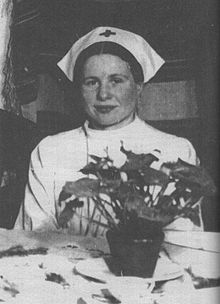 For years I’ve admired Irena Sendler and those who worked with her, as well as the courageous Polish families and others who took in children. I thought how wonderful it would be to tell her story—their story. But it had been done, in numerous books. Best of all is Life in a Jar—a nonfiction account of Irena’s heroism and the American teens who uncovered her story for the world based on firsthand interviews. I could add nothing to that brilliant work, and yet I couldn’t get her story or her lifelong mission and approach to life out of my mind.

Irena’s father, a medical doctor, treated impoverished Jewish patients for typhus when no other doctor would risk helping them. While treating these patients, he contracted the disease. As he lay dying, the young Irena asked him why he’d done it. He replied that when someone is drowning, you jump in to save them, whether or not you can swim. It was a principle Irena lived by all her life.

Of the 2,500 Jewish children her network helped to save, approximately 2,000 were found after the war. Though their parents had been murdered (mostly gassed at Treblinka), many were united with extended family, thanks to lists Irena had kept hidden of the children’s Jewish names and the new Aryan names and addresses they were assigned. Approximately 400 to 500 children were never found.

Irena Sendler’s story and these threads entwined through my heart and mind and joined with the threads of Itzhak Dugin’s (or Isaac Dogim’s) story to form a whole. 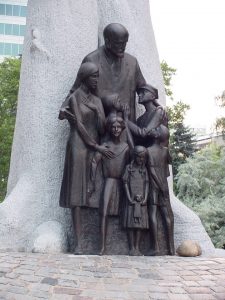 Other real-life characters are sprinkled through the story—like Jan and Antonina Żabiński, who hid Jewish people in their Warsaw zoo, and Dr. Janusz Korczak, a respected Polish pediatrician and well-known radio personality who advocated for children, authored the beloved King Matt the First, ran an orphanage in the Warsaw Ghetto, and finally marched with the children he’d cared for to the train and into Treblinka and death, despite repeated offers for his personal freedom. Fictional characters emerged from composites of real-life heroes and heroines. Father Stimecki is a composite of priests who gave the names and identities of Polish Catholic dead to Jews to save their lives and to extend medical benefits when those benefits were denied Jews under Nazi occupation.

These are the real heroes of this story.

The Medallion is a reminder to help when help is needed, regardless of the cost. It is a tale of our desperate need to give and to receive love. And it is the story of our surrender to the One who loves us with everlasting love and knows best and beyond what we can imagine—even when we’re terrified that our losses and letting go will consume us.

As Pan Bukowski teaches Sophie in The Medallion, we don’t know how the Red Sea parted, only that God made it happen when there seemed no way forward.

Likewise, we cannot live by sight amid the darkness. We can’t foreknow or understand how God provides answers to our deepest needs—only that He does. Trusting Him is our path to peace, whether or not He answers in the way we hope. He calls us to step out on the dry ground He provides, trusting that when there seems no way, our God who is able will forge our path through deep waters. 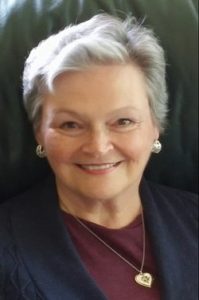 Three-time Christy and two-time Carol and INSPY Award–winning and bestselling author Cathy Gohlke writes novels steeped with inspirational lessons, speaking of world and life events through the lens of history. She champions the battle against oppression, celebrating the freedom found only in Christ. Cathy has worked as a school librarian, drama director, and director of children’s and education ministries. When not traveling to historic sites for research, she, her husband, and their dog, Reilly, divide their time between northern Virginia and the Jersey Shore, enjoying time with their grown children and grandchildren. Visit her website at www.cathygohlke.com and find her on Facebook at CathyGohlkeBooks.

Other Books By Cathy Gohlke 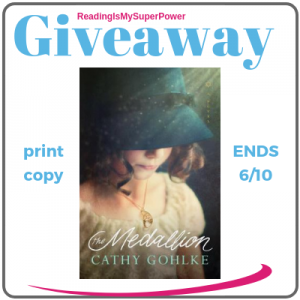 Tyndale House is offering a print copy of The Medallion to one of my readers! (US only) This giveaway is subject to Reading Is My SuperPower’s giveaway policies which can be found here. Enter via the Rafflecopter form below.


What about you? Who would you like to learn more about from Cathy’s beautiful article?

29 responses to “Guest Post (and a Giveaway!): Cathy Gohlke & The Medallion”