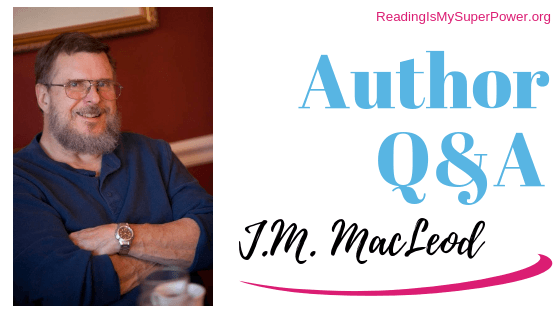 I’m pleased to introduce you today to J.M. MacLeod, here today to chat about his new fantasy novel, Inception of a Brigade!

John has worked as a stringer photojournalist for The Courier of Littleton, NH, and staff writer/photographer for The Caledonian Record in St. Johnsbury, VT. He has directed evangelistic Christian coffeehouse ministries, served as deacon and teacher in various denominational churches, pastored house churches, and, with his wife Beverly, been a youth group leader.

John and Beverly were raised in evangelical churches and born again at early ages. They met in college, fell in love, and were married. Early in their marriage they were enticed to join “The Move,” a group that presented new and fascinating interpretations of Scripture. They soon became indoctrinated into their cultic teachings. Through the faithful prayers of family and friends they were delivered from The Move and its erroneous teachings.

As a result, John became devoted to studying and memorizing portions of the Bible so he would know what the Bible said as opposed to basing his beliefs solely on what others taught. The Saga of the Singing Sword Brigade series is the outcome of the couple’s spiritual journey including their escape from deception. John wrote Inception to encourage believers to study and apply scriptural truth to their lives, engage in evangelism, and participate in the visible and invisible spiritual warfare around us. 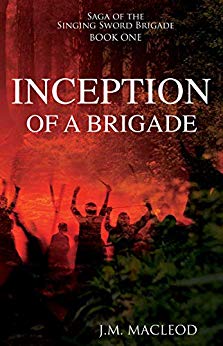 The inception of a spiritual odyssey begins . . .

Artka, once a nobleman’s son, is now a Carnalian soldier fighting a war against Ecclessa, which is said to be ruled by a ruthless Magician.

Lost in the forest while escaping tophets, Artka is pierced by an Ecclessite’s kingsman sword-but the sword does not immediately harm nor kill. To survive the piercing and heal his heart’s wound, Artka seeks Logon who waits at the rock where he was slain, only to learn a new brigade is soon to be created and Artka is to be a kingsman of it.

Invisible enemies lurk around him.
Hate battles against him.
Sacrifice is required of him.
Knowledge awaits him.

Only the runes on his Ecclessite sword can lead him to safety . . . if he can survive the journey.

Hi John! Welcome to the blog!

John: As soon as the peel is opened a heady aroma fills the immediate area, promising delightfully sweet juices that will soon awaken taste buds, providing thirst relief as well as staving off hunger. That, and because there is no English word that rhymes with it. Get it now?

Carrie: I’m thinking not Hallmark then…

John: According to the manufacturers, it’s the only proper way. The results speak for themselves.


Carrie: I still maintain that the manufacturers are wrong! lol

John: Forested heights or mysterious depths… Why choose; buy a mountainous island in the midst of the ocean.


John: Wm. Shirere’s The Rise and Fall of the Third Reich, Tolkien’s The Hobbit and The Lord of the Rings Trilogy, C.S. Lewis’ Space Trilogy (Out of the Silent Planet, Perelandra, That Hideous Strength) Adrift in a Boneyard by Robert Lewis Taylor.


Carrie: My husband loves the Space Trilogy! And The Hobbit has a special place in my heart.


John: Animal group names such as “An Unkindness of Ravens” or “A Shiver of Sharks.”


Carrie: some of those are so unexpected, aren’t they?


Q: Did you have the whole plot outlined before you started writing Inception of a Brigade, or did you let the characters dictate what came next?


John: Though I knew what direction I wanted the work to say, the saga flowed as I typed; I heard the conversations, mentally saw the action and had to uncover the different plots as they developed, which often took me by surprise.

Carrie: I’m always intrigued when authors say things like this – it’s so fascinating to me.


John: I had some fun with names of persons and sometimes things.

“Only one weapon to pierce man’s heart,
Not to destroy, but new life impart,
Only two edges forged in sky fire,
Shall lead men to heart’s true desire,
Only three voices tolled runes know,
King, Prince and Advisor, these only show,
Xychirion’s great power expressed on this blade,
Pretenders will fail, false voices will fade.”

This is the essence of my message; It’s an encouragement and a warning at the same time for believers to to know the powerful weapon and tremendous gift/book God has given His children to learn how to contend for the hearts of men and women as well as wage warfare against the forces of evil stalking the earth.

Carrie: It is definitely a battle!

John: Finishing the writing of the sixth and last book of the Saga series.