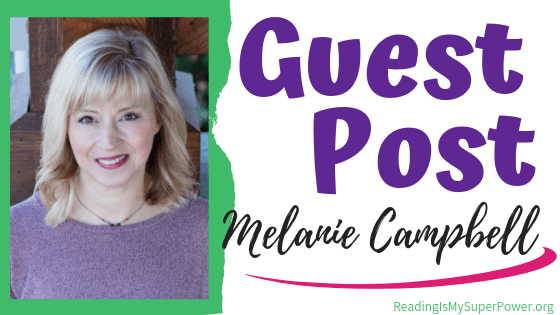 I am pleased to welcome Melanie Campbell to the blog today to chat about her upcoming novel One Woman Falling! I adore waterfalls & today Melanie is giving us a guided tour of the falls her heroine Cassie visits in the novel. 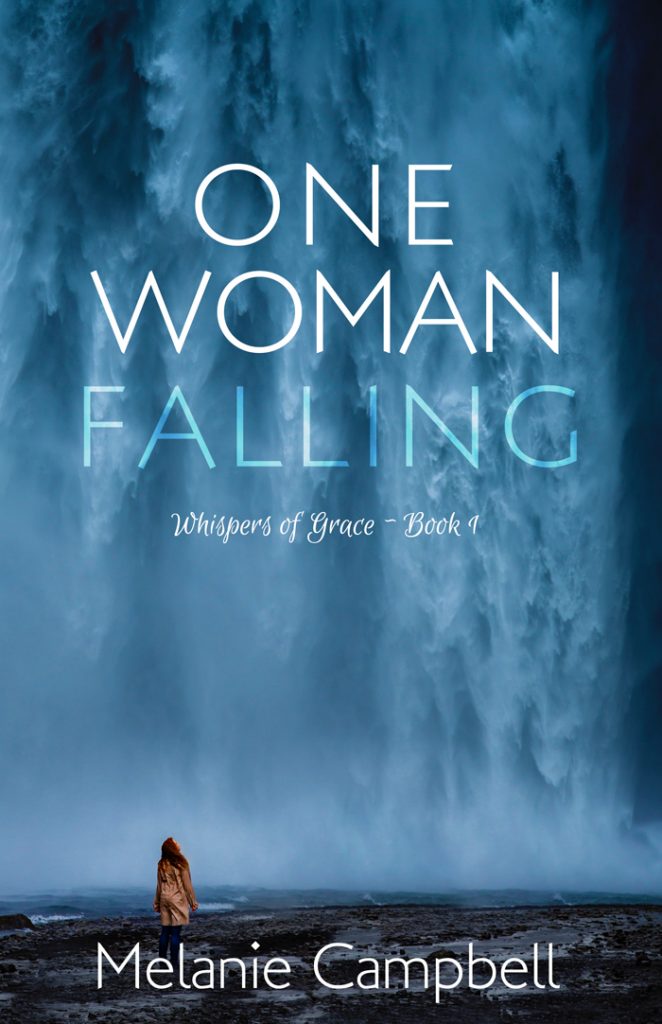 Cassie Peterson lives in an invisible prison of fear, chained by self-doubt and guarded by a relentless warden—her husband. Derrick’s verbal abuse as well as his alcoholism have left Cassie alienated from her family, without friends, and certain she can’t survive on her own.

After an unexpected police visit, Cassie realizes the survival of her four-year-old daughter, Renee, depends on Cassie’s courage to leave. What she doesn’t plan on is Derrick’s vengeful custody fight.

While walking through the treacherous world of divorce, Cassie is encouraged by her spunky new friend, Missy Langdon, to pursue her love of waterfalls. Cassie finds solace in the waterfalls on the agonizing weekends she’s forced to hand Renee over to Derrick. Meanwhile, unexpected help comes in the form of Brian Sutton, an attorney at the firm where Cassie works—but what price will she ultimately pay for his assistance?

As Derrick’s threatening behavior escalates, Cassie questions her choices. How long will her daughter suffer before the custody case is resolved? Why is she drawn to waterfalls during this chaotic time? And who will stand with her when everything comes crashing down?

A Guided Tour of Cassie’s Waterfalls


In my novel One Woman Falling, the heroine, Cassie Peterson, sets a goal of seeing every waterfall in the state of Oregon. Cassie, who has recently fled from an abusive marriage, is engulfed in heartache and worry every time her ex-husband has their four-year-old daughter for the weekend. She considers the waterfalls a diversion from the tumultuous world of divorce, but her waterfall adventures hold more in store than Cassie realizes.

In writing One Woman Falling, I had to decide which waterfalls Cassie would see during the course of the story. Since Oregon has about 278 waterfalls, I had plenty from which to choose. However, I wanted to use waterfalls that Cassie could explore without an overnight trip, so all of the waterfalls I chose are within driving distance of Eugene, Oregon. I initially had eight waterfall scenes in the story but my book ended up being far too long. I had to cut scenes, which meant cutting out a couple of the waterfalls and combining the story elements of those deleted scenes with Cassie’s other waterfall hikes.

Below are the waterfalls in One Woman Falling, along with one of my favorite lines for each waterfall scene. I’ve also included the two waterfalls that were deleted from the book. 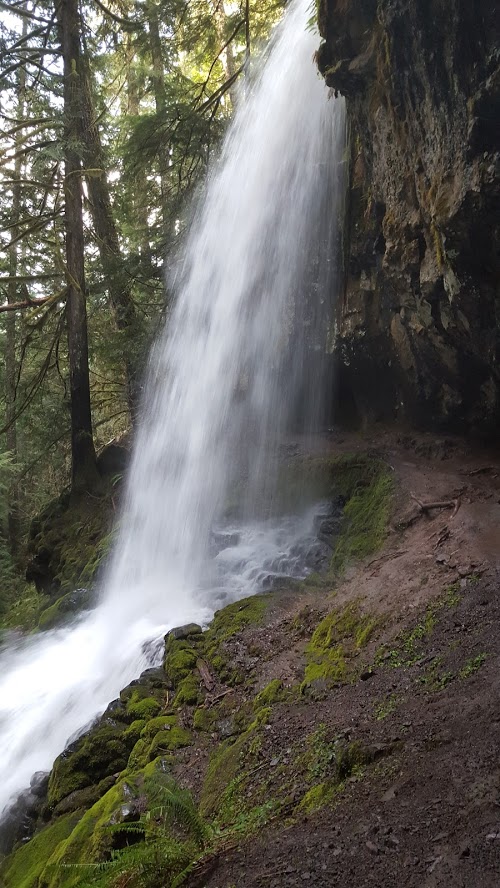 “Was this what peace felt like? I stepped closer, letting the water from the alcove drip on my face, hopeful the drips would conceal my tears.” 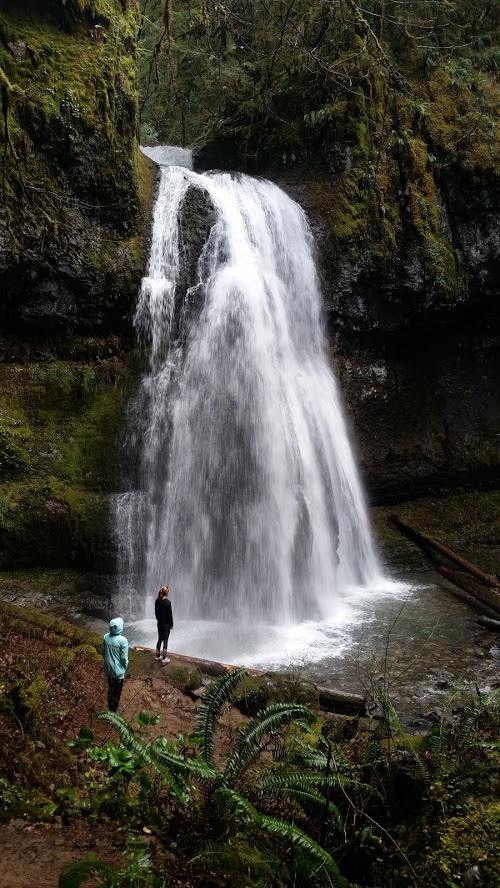 One of the reasons I chose Spirit Falls was the name. It’s the first waterfall Cassie goes to alone.

“I saw the falls through the trees ahead. It was not a massive fall, but big enough to send a mist up into the air for several feet. I walked to the end of the trail and watched the water, letting its steady roar fill me, my aching chest breathing in the mist.” 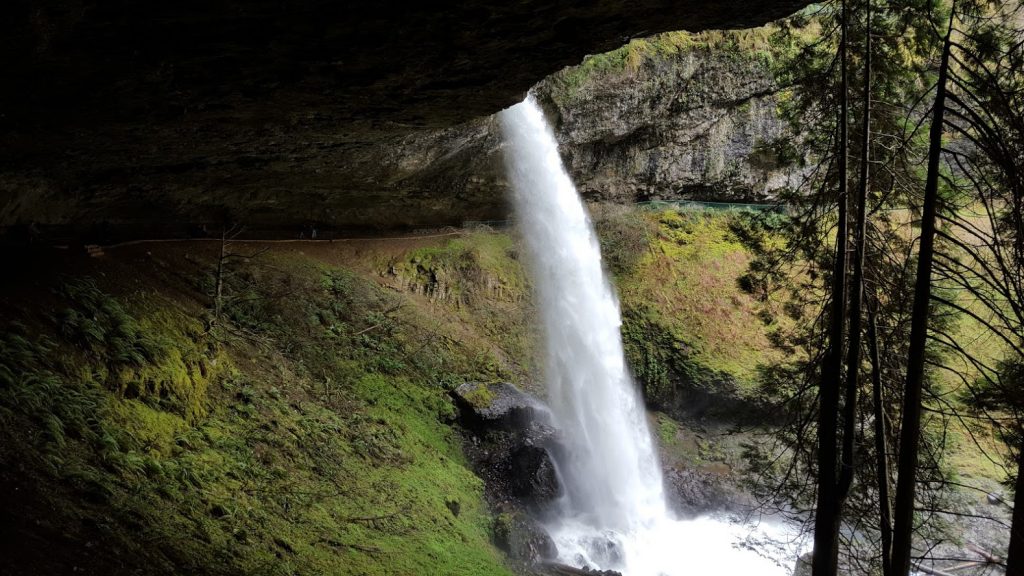 Cassie goes on this hike with Brian Sutton, an attorney at the firm where she works. Pictured is North Falls, one of the ten falls on the hike.

“For a moment I felt tiny, over-powered, like I did whenever I stood at the ocean’s edge. It wasn’t a bad feeling. It was something not quite within my grasp, so full of hope it made all of life’s struggles seem as harmless as the ripples in the tiny puddles at my feet.” 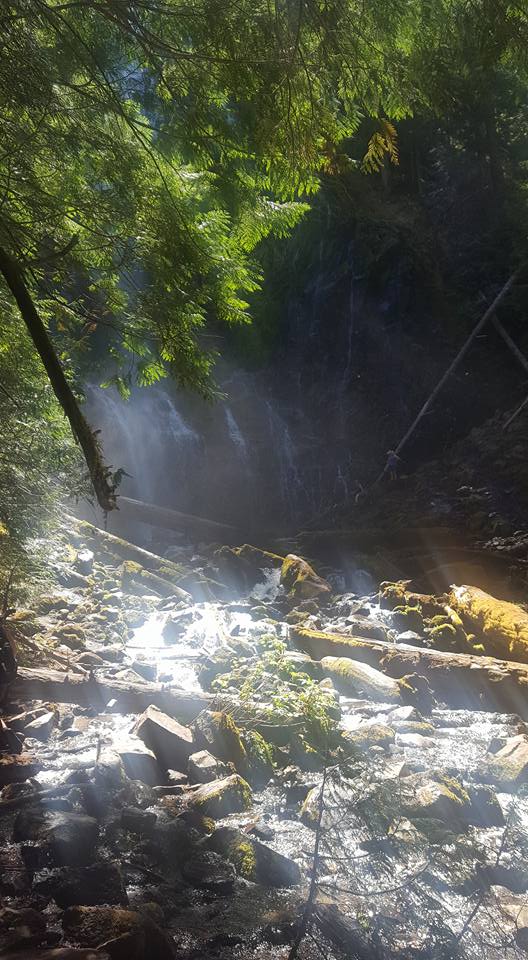 “Waterfall mist surrounded us, tiny droplets of water seemingly suspended in midair. The sun shone brightly on them, and reflected off the falls, making me squint. We were surrounded in water, surrounded in light.” 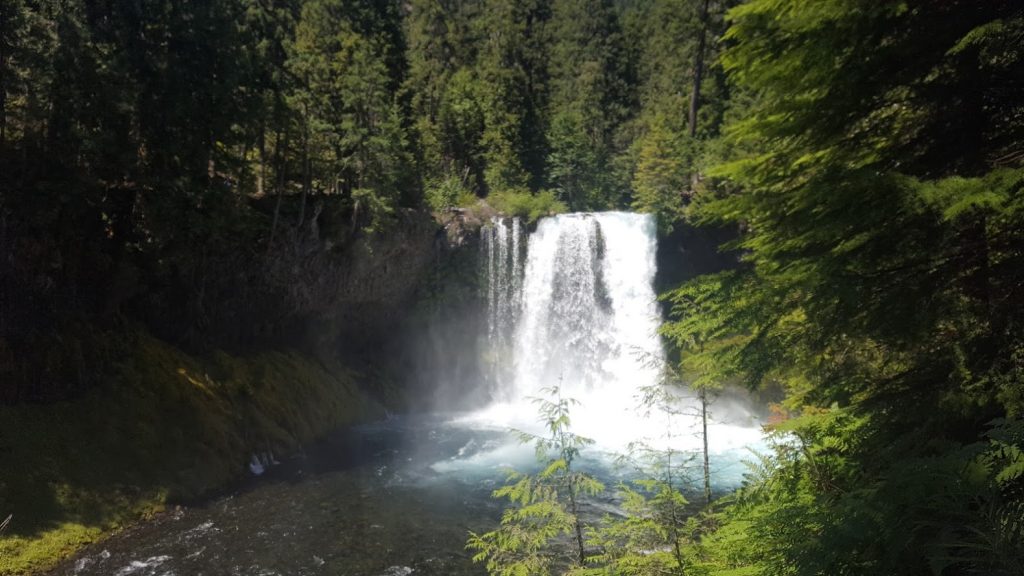 Koosah Falls is located on the McKenzie River, accessible from a trail that begins a mere 100 feet from the viewing point for Sahalie Falls. I really wanted to use Sahalie Falls in my book because Sahalie means “heaven” in Chinook jargon language, but its structure and location didn’t quite work for story purposes.

“The swirling rapids were steps away, crystal blue, even under the overcast light. Such beauty, but also a death trap if someone were to fall in.” 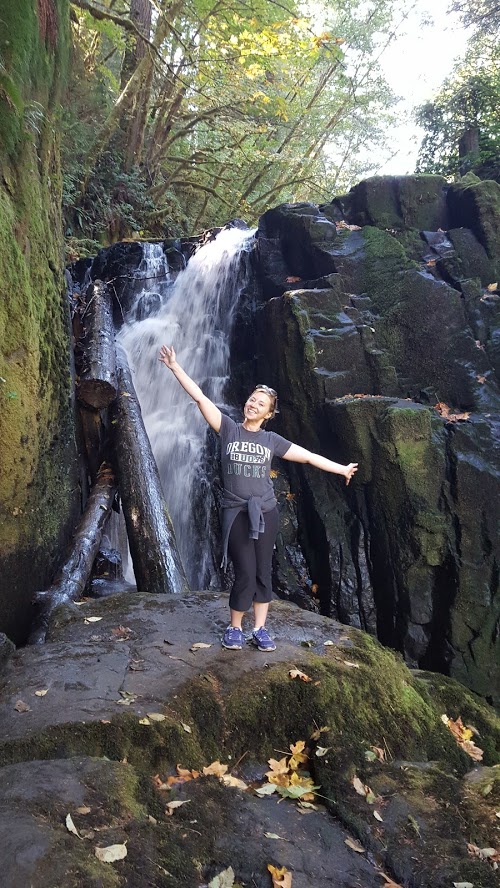 One of the waterfall hikes deleted from the book was Sweet Creek Falls. The waterfall at Sweet Creek is not as impressive as some, but it’s a delightful hike with several gentle cascades along the creek that make great places to get in and enjoy the water during hot summer months. Pictured is the upper part of the waterfall and yes, that’s me standing in front of it. In my original version of One Woman Falling, this was the first waterfall Cassie visited with Brian. 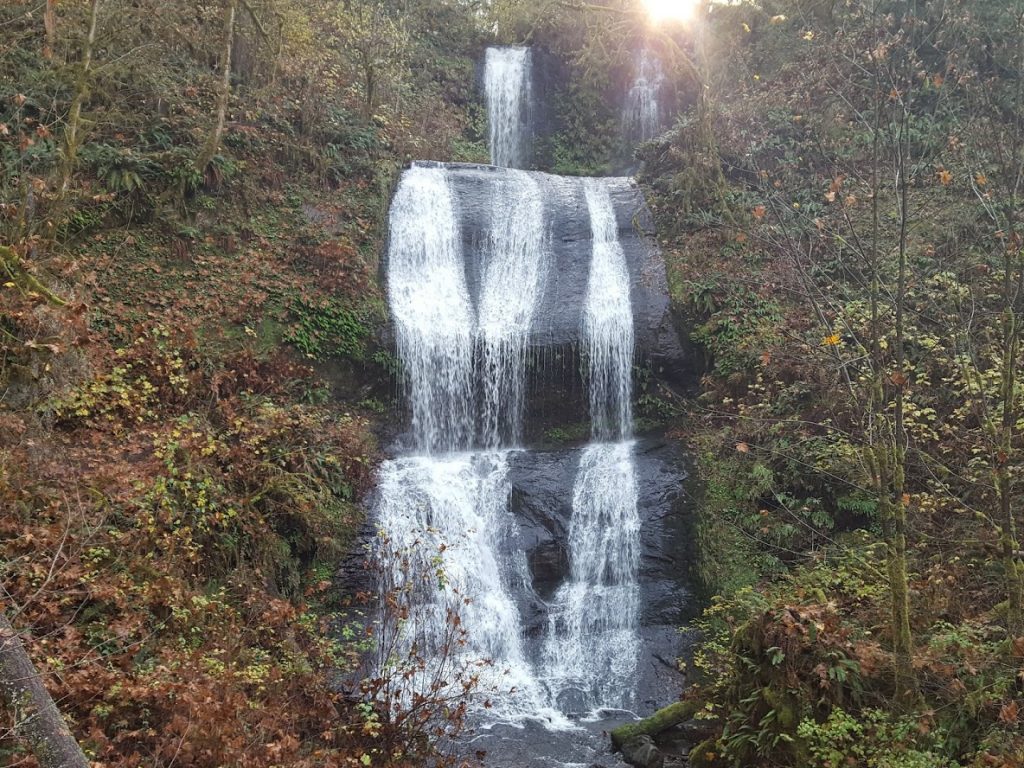 The other waterfall deleted from the book was Royal Terrace Falls. In the unedited version of One Woman Falling, Cassie visits this waterfall when she takes her daughter, Renee, on the McDowell Creek Falls trail. Renee thinks the waterfall looks like a giant waterslide. I’d have to agree!

I visited all of these waterfalls in the name of research (and for inspiration.) Getting out and enjoying the outdoors was a welcome break from writing the emotionally tense scenes in the book. While Cassie’s story is fictional, it is inspired by my own experience in an emotionally and verbally abusive marriage. I couldn’t have made it through the heartbreak of divorce and the ensuing custody battle without God coming to my rescue, mainly by bringing people into my life who helped me along the way.

Because I personally know the need is great, I’m donating all of my net profits from the sale of One Woman Falling to charities that help families affected by abuse and addiction.

That’s so sweet of you to do, Melanie! Such a great need. And I’m looking forward to visiting these waterfalls again on the pages of One Woman Falling! 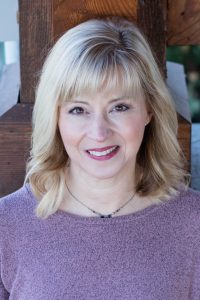 Melanie Campbell is a member of Oregon Christian Writers and ACFW. She wrote her first story when she was eight-years-old and has been in love with the power of storytelling ever since. She is also passionate about social issues and holds a degree in Sociology from the University of Oregon, which she obtained during her stint as a single-mom. She’s now married and lives in Oregon’s beautiful Willamette Valley with her husband, their three children, and several spoiled pets.

When not writing, she does the bookkeeping and other office work for her husband’s painting business, obsesses over the well-being of their three daughters, and cooks healthy meals. In the spring, you may find her hitting the trails to one of Oregon’s magnificent waterfalls.

What about you? Which waterfall from One Woman Falling would you most like to visit? Or maybe you’ve already visited one! Let us know 🙂