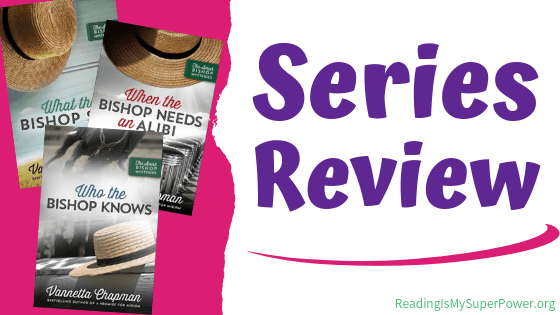 As y’all may remember, I reviewed books professionally for RT Book Reviews (aka Romantic Times) for three years until it shut its doors. Unfortunately, I wasn’t allowed to share these reviews with you here on the blog as long as they still belonged to the magazine. However, now that it has closed its doors and deleted its website (including my reviews) from its corner of cyberspace, I’m free to share my reviews for those books here too! Today I’m featuring my reviews for The Amish Bishop Mysteries by Vannetta Chapman… 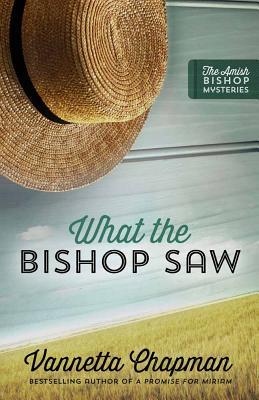 Somewhere in the Embers Lies the Truth

A fire blazes out of control in the San Luis Valley of Colorado, leaving an elderly Amish bachelor dead. Bishop Henry Lapp rushes to the scene, and he learns the fire was no accident. Someone intended to kill Vernon Frey. But who would want to kill Vernon? Well, practically everyone—Amish and Englisch alike.

When the police point the finger at a suspect Henry knows is innocent, the bishop must decide whether or not to use his mysterious, God-given gift—one he’s tried desperately to ignore all these years—to try and set the record straight. His close friend and neighbor, Emma, encourages Henry to follow God’s leading.

Could the clue to solving the case be locked somewhere deep in his memory? Will Henry find the courage to move forward in faith and put the right person behind bars? Is his friendship with Emma becoming something more?

What the Bishop Saw is a story of extraordinary talents, the bonds of love and friendship, and the unfailing grace of God.

Since recovering from a severe brain injury in childhood, Henry Lapp has had a curious new ability. When a deadly house fire claims the life of a much-disliked member of Henry’s church, the local sheriff suspects a man Henry strongly believes is innocent. Is it possible that somewhere, in the depth of his memory, Henry has the clue that could make all the difference? Normally, Henry tries to hide this “acquired savant” skill, but his friend Emma encourages him to use it to help the accused young man.

Chapman has a knack for Amish whodunits with a twist, and this new series is no exception. Henry Lapp (the titular bishop) and his unique gift immediately draw readers in, and it’s refreshing to have an older protagonist. His deepening friendship with Emma is sweet and tender, providing levity amid the glimpse into the darker side of human nature. Being able to get inside the culprit’s mind and motives adds to the unputdownable factor, and the journey to solving these crimes is another highlight. 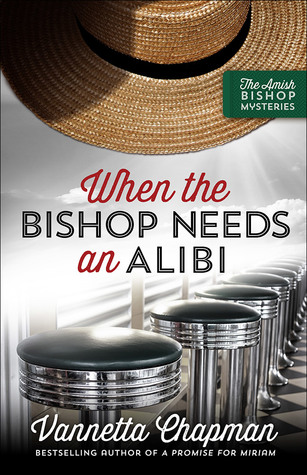 A Terrible Secret Hides in the Bulrushes

Amish bishop Henry Lapp eagerly awaits the annual arrival of 20,000 sandhill cranes to the San Luis Valley of Colorado. But his visit to the Monte Vista National Wildlife Refuge reveals more than just a miracle of God’s creation. Hidden among the bulrushes and cattails is the deceased body of a young woman.

As the local authorities attempt to unravel the mystery, Henry feels God’s calling to use his extraordinary talent to aid in the investigation. His ability to draw from memory in photographic detail could help solve this puzzling case.

Henry’s closest friend, Emma Fisher, has always urged him to embrace his gift. As their relationship deepens, Henry realizes his involvement could put him and those he loves in the direct path of a killer, one who is willing to do anything to cover up a brutal crime, including framing the bishop.

When the Bishop Needs an Alibi is a compelling story of faith, friendship, and finding courage only God can provide.

Bishop Henry Lapp is at Monte Vista National Wildlife Refuge for the annual arrival of the sandhill cranes when he stumbles on the body of a young woman. Solving this case becomes even more imperative when Henry himself becomes the prime suspect in her murder. As he and the widowed Emma Fisher uncover startling details about why the victim was in Colorado, their friendship continues to blossom into the potential of more. Henry is in a race against time for his own freedom, but learning the truth may become more costly than he knows.

Accidental savant – and Amish bishop – Henry Lapp returns in an intriguing mystery that is even better than its delightful predecessor! Codes and clues and hold-your-breath danger share the page with timely touches of humor, friendship and faith. The older protagonists are a refreshing detour from the norm, but the story is peppered with enough age-variety to appeal to a wide range of readers. The suspense is well-plotted, and Henry’s gift (of drawing in photographic detail what he intuitively sees) again plays a pivotal role. 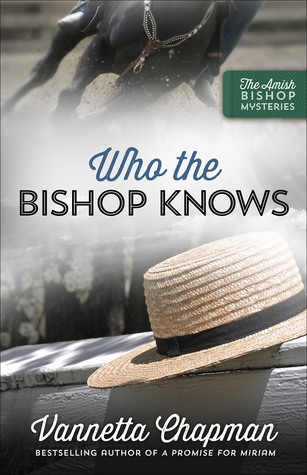 Every year, residents of the small Amish community in Monte Vista, Colorado, look forward to the Ski Hi Stampede, the state’s oldest professional rodeo. The rodeo is always good, clean entertainment for the hardworking farmers of the San Luis Valley. But this year, the Stampede turns deadly for one Amish man. Did rodeo fans see an unfortunate accident? Or something more sinister?

Amish bishop Henry Lapp is known far and wide for his uncanny ability to draw and remember the smallest details of anything he’s seen, skills that have served him well in past investigations. He was at the rodeo that day. The problem? He didn’t see Jason Scott’s death.

With a murderer on the loose and members of his community being threatened, Henry must act fast. But can he solve a crime he didn’t see? This time around, Henry will have to rely on his keen sense of human character and observation, skills he’s honed in his role as bishop, if he hopes to crack the case.

What the Bishop Knows is a story of accepting our talents, putting one another first, and trusting that God will care for His children.

Amish bishop Henry Lapp is known for his unnatural ability to draw everything he sees – even when he doesn’t realize he’s seen it. This skill has come in handy for law enforcement more than once, and in more than one community. But this time, when Jeremiah Schwartz is gunned down in the middle of a rodeo, Henry was buying hot dogs. He can’t draw what even his subconscious didn’t see so at first it appears that Henry and his soon-to-be-bride Emma won’t have to get involved in the investigation. When Henry and members of his Monte Vista Amish community are threatened – and harmed – the savant bishop must draw on a different set of skills to help police solve the crime before it’s too late.

Well-written and engaging, the conclusion to Chapman’s Amish Bishop Mysteries is as intriguing as her main character. While the previous books in the series have spotlighted Henry Lapp’s unique crime solving abilities, his artistic-savant skills are no help this time. This lets some other people in the community have a turn in the investigative spotlight and allows readers to delve a little deeper into Henry’s character and instincts beyond his drawings. Relatable characters spanning multiple generations, a nicely-constructed plot, and a light dash of romance round out the edges and provide an entertaining and compelling story. Some past plot points are rehashed almost one too many times, but overall this does not take away from the enjoyability of the novel. 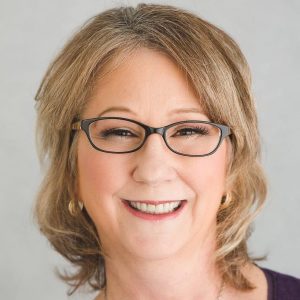 Vannetta Chapman writes inspirational fiction full of grace. She is the author of over twenty novels, including the Pebble Creek Amish series, Shipshewana Amish Mystery Series, and Plain and Simple Miracle series. Vannetta is a Carol award winner, a Christy finalist, and she also received more than two dozen awards from Romance Writers of America chapter groups. She currently writes Christian suspense, Amish romance, and Amish mystery. She was a teacher for 15 years and resides in the Texas hill country.

Other Books by Vannetta Chapman

What about you? Have you read this series? What interests you most about the books? (Or, what did you love most about them if you’ve read them?)