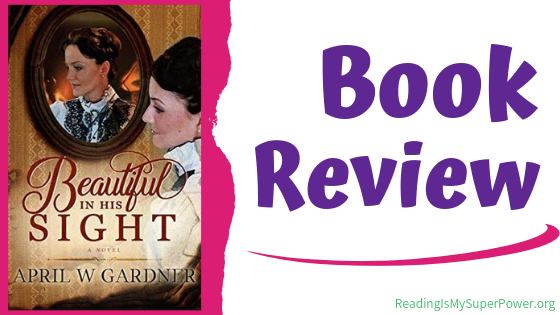 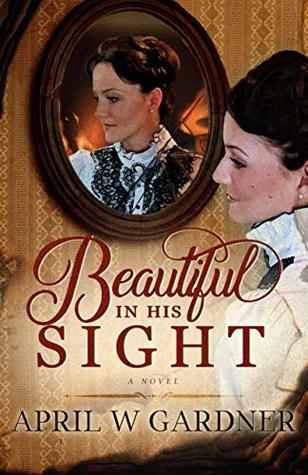 It’s 1917, and Halifax is at war. Silas Quinn, street sweeper and army reject, remains on the home front, shunning God and society as religiously as they shun him. But the night he stumbles across a half-frozen prostitute, his eyes blink open, and his greater purpose is born: preserve and protect.

There’d been a day when shop girl Helen Fraser was desperate enough to believe a few nights in a brothel would cure her troubles. By some miracle, Major Jack Gordon deemed her worth saving, but Helen knows her meticulously recreated identity cannot last. What she doesn’t expect is for its destruction to come about, not by a john or one of the madam’s goons, but by a force great enough to flatten a city and bury her alive.

Set against the backdrop of the Halifax Explosion, Beautiful in His Sight is a Christian historical romance that explores unequivocal grace and identity in Christ.

This book. This hero. This heroine. Y’all. I am undone.

Before picking up Beautiful in His Sight, I had never heard of the Halifax explosion. I’m not even sure I’ve ever read a book set there before, historical or otherwise. This devastating moment in Canadian history is brought vividly and emotionally to life under April Gardner’s talented pen (or laptop, as the case may be) and touched my heart in such poignant ways. The author skillfully captures the humanity behind the history, giving faces and families and dreams and heartbeats to the devastation, making it a riveting story but so much more than one as well.

Let’s talk about Silas for a moment, shall we? Be. Still. My. Book Boyfriend Collecting. Heart. I’m still recovering from how completely Silas captured my heart. From his Irish brogue to his heart of gold to his brawny build to his steadfast pursuit of the woman he loves… there I go swooning again. Their first kiss? SWOON. His ‘all male’ reaction to Helen’s gradual affections. His passion for her that can’t be contained, first in his eyes and then in his kisses, even if they are surrounded by people. Stick me in the freezer, I’m done. But there are many more layers to Silas than a swoonilicious book boyfriend who’s close to toppling a couple heroes in my top ten. Eliza (more on her in a moment) says at one point that Silas is “A Jesus in the flesh if ever I saw one“, and she’s right. He exemplifies Jesus in his actions, his heart, his integrity and his self-sacrifice. Of course Silas is human, so the analogy doesn’t stay constant but it’s in those moments when he reflects our Savior he becomes a true hero in every sense of the word.

And Helen. Oh she has my heart. Despite the lies that life has fed her, the lies life has disguised as Truth, she is a fighter. A pure heart. A woman to be admired. Her courage more than once left me breathless, tears in my eyes, as did her ability to believe in the good of people despite having seen the worst humanity can do to each other. Eliza, a new friend as the story progresses, took me by surprise more than once (in all the best ways) and inspired me to be more aware of paths God connects ‘for such a time as this’ in my own life.

Bottom Line: Beautiful In His Sight shines a light on an aspect of WW1 that I’ve personally never heard of before, and Gardner is exceedingly skilled at taking obscure pieces of history and weaving captivating story through the embedded facts. This novel is rich and atmospheric in both historical detail and setting, with compelling characters that will grip your emotions and keep you thoroughly invested through all 744 pages. It’s not a story you will easily forget, nor will Silas or Helen or Jack or Eliza leave your heart anytime soon. A beautifully redemptive and tender tale with an unlikely but true hero – and a brave heroine who defies the odds.


KissingBook Level: 4+ / Keep those fans & fainting couches handy (and maybe have a freezer nearby too, just in case) 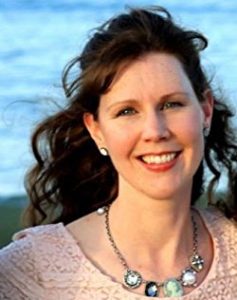 APRIL W GARDNER writes history with a Christian perspective and a little imagination. She is a copyeditor, military wife, and homeschooling mother of two who lives in Texas. She writes Christian historical romance with a focus on our Southeastern Native Tribes. In no particular order, April dreams of owning a horse, learning a third language, and visiting all the national parks.

April loves to hear from her readers at: aprilgardnerwrites@gmail.com


Other Books by April Gardner

The Story Behind the Story

My novels are never purely fiction. They are stories constructed around truth, around some segment of the past that’s both stunning and stunningly forgotten. My latest novel, Beautiful in His Sight, is set during the Halifax Explosion, a WW1 event little known in most of the world. For those in Halifax, Nova Scotia, in December of 1917, it literally shattered their world.

That’s the setting we find my characters Silas and Helen struggling to survive, but—as in every good romance—love (and God’s grace!) brings them through.

The Story Behind the Setting 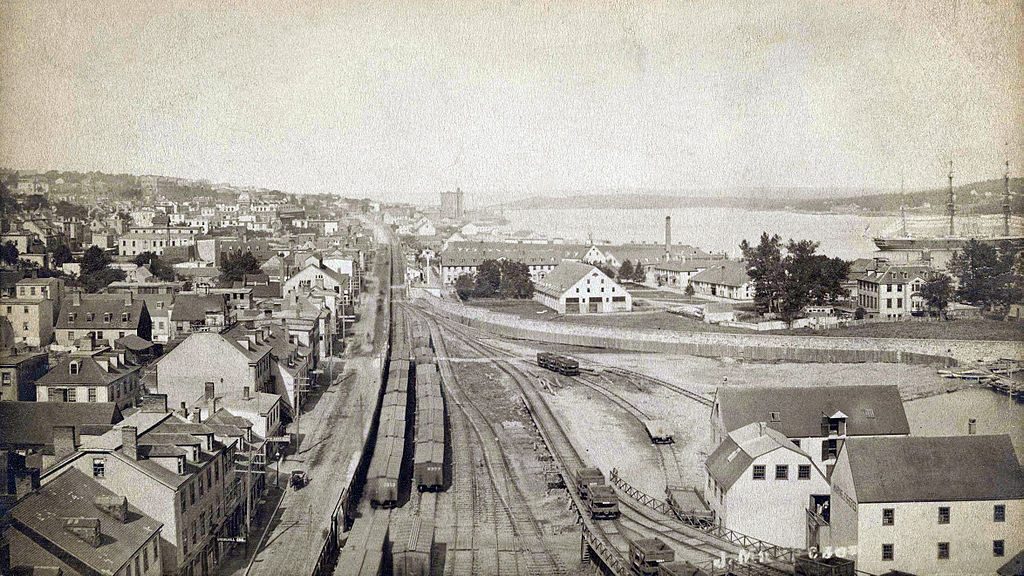 By December 1917, Halifax had passed tens of thousands of soldiers and sailors through its railyard and onto the naval vessels in its harbor. With the military came the prostitutes who migrated in droves to the slums. It’s reported that some days, the only passengers disembarking from the trains were women in short skirts. Slumdom’s seams overflowed with carnality, public drunkenness, and solicitations. Prostitution wasn’t the only job to be had for women. With so many men wearing army green, ladies of the proper class and training stepped behind registers and bookkeeping desks and kept Halifax running.

This is the world in which we find our female lead, Helen Fraser, a reformed prostitute desperately trying to start over as a salesclerk.

The Story Behind the Explosion 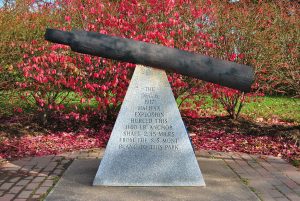 As Silas, the story’s male lead, puts it, the explosion was “a tragic accident, a miscommunication between passing ships.” In short, it was a dozen small decisions that accumulated to one very horrific event. The collision and blast released the equivalent energy of 2.9 kilotons of TNT and instantly obliterated everything within a half-mile radius. The munitions vessel that exploded, the Mont Blanc, rained iron shrapnel all over Halifax. Its 1,160-ton anchor landed 2.5 miles away where it can still be found today.

The Story Behind the Name

The name Helen Fraser (female lead) is an honoring nod to Helen Clark, a courageous young woman who survived the explosion. This is her story. 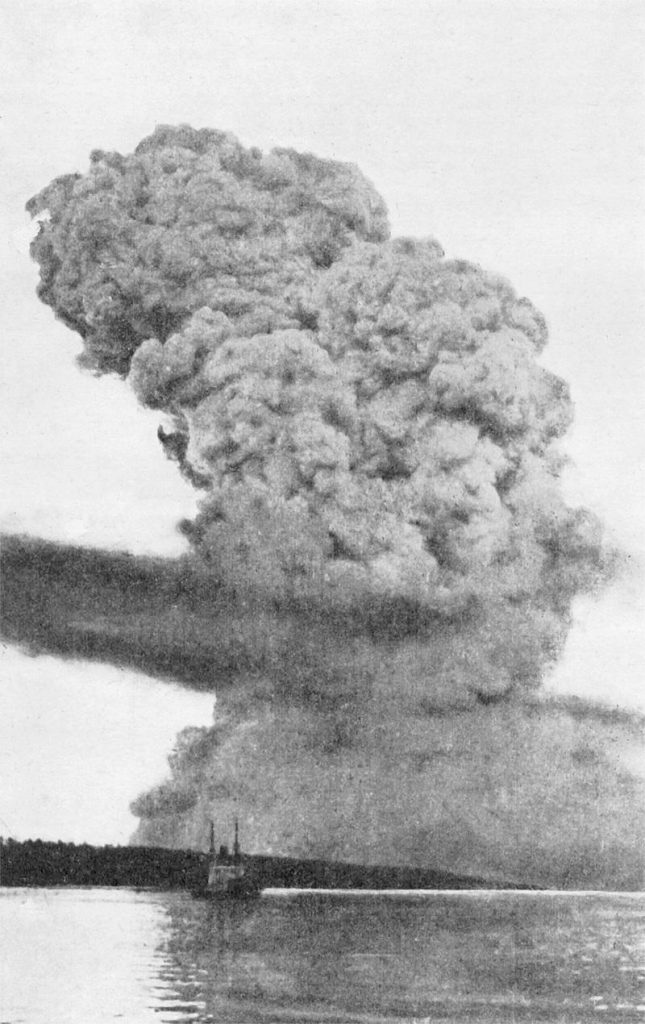 Helen Clark, age eight, was beginning her school day at St. Joseph’s when she felt something disturbing. “Like thunder was taking place alongside of you,” she later said, “instead of up in the sky.” She looked to the window and gaped at the glass bowing inward. She flung her arms over her face and ducked an instant before it blew in. Then, in her words, “The ceiling above gave way at one corner and down two sides of the room, hanging like the flap of a great envelope and spilling out children from the room above.”

A nun grabbed her arm and said, “My heavenly God, the Germans have arrived! Get down on your knees girls.” In lieu of prayer, Helen wrenched away and jumped out the second-story window, narrowly missing the debris that, in the next moment, struck and killed the nun. A snow mound broke Helen’s fall. Suddenly very tired, she laid down right there, feeling no cold or pain, and went to sleep.

Eventually, two men approached to see if she was dead. Though she couldn’t speak, she managed to get to her feet. They straightened the bow on the top of her head and told her to go home if she had one to go to. The blood crusted over her eyes limited her vision, but she shambled along best she could, recognizing nothing. She knew her street only by the change to cobblestones under her feet, and her grandmother recognized her only by the bow in her hair.

Quick-thinking and bold, little Helen avoided both death and blindness, and I’m honored to name my heroine after her. 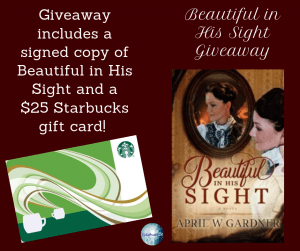 To celebrate her tour, April is giving away a grand prize package of a $25 Starbucks gift card and a signed copy of her book!!

Be sure to comment on the blog stops for nine extra entries into the giveaway! Click below to enter.

This giveaway is hosted by Celebrate Lit, not RimSP
Follow along with the tour for more chances to win by clicking the banner below

What about you? Have you heard of the Halifax explosion? What interests you most about Beautiful In His Sight?

30 responses to “Book Review (and a Giveaway!): Beautiful in His Sight by April W. Gardner”