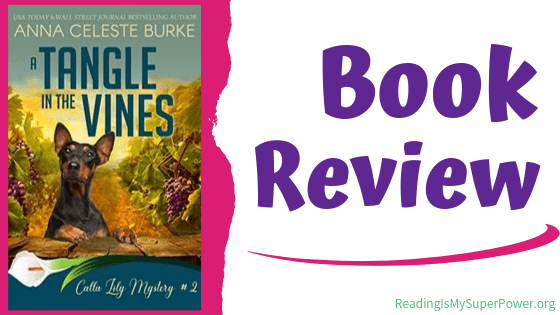 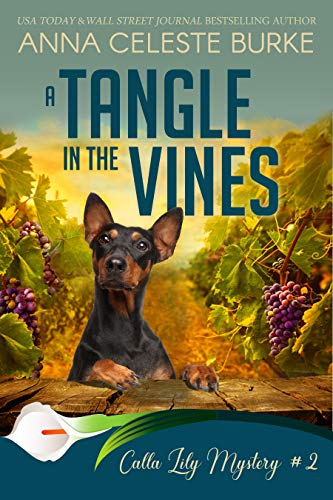 
The curtain may fall on the Calla Lily Players’ first season unless Lily and Austin can find a killer on the loose in California’s wine country.

Torrential rains threaten to put a damper on The Calla Lily Players’ first outdoor theater production. When the ground suddenly shifts, buried secrets revealed amid the tangled vines put the spotlight on murder. As Lily and Austin dig deeper into the mystery, drama unfolds onstage and off. The race is on to find a killer before opening night.

Grab your copy of the second book in the Calla Lily Mystery series by USA Today and Wall Street Journal Bestselling Author, Anna Celeste Burke and join the race! 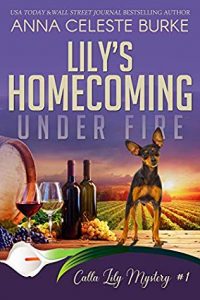 Bottom Line: A Tangle In The Vines starts off with a bang and keeps you on your toes throughout. A possible serial killer, an abused but still precocious little boy, a disturbed man… and more! The plot is well-written, though some of the editing could have been tighter & some scenes felt a little awkward. Still, Lily and her crew of friends (and a swooony US Marshal love interest) are immediately likable and engaging. A great series for cozy readers who like to chuckle, too.

(I voluntarily reviewed a complimentary copy of this book which I received from Great Escapes Virtual Book Tours. All views expressed are only my honest opinion.) 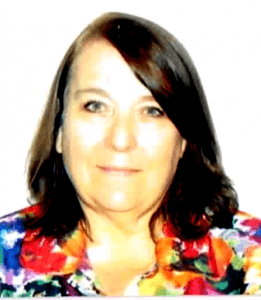 Life is an extravaganza! Figuring out how to hang tough and make the most of the wild ride is the challenge. On my way to Oahu, to join the rock musician and high school drop-out I had married in Tijuana, I was nabbed as a runaway. Eventually, the police let me go, but the rock band broke up.

Retired now, I’m still married to the same sweet guy and live with him near Palm Springs, California. I write the Jessica Huntington Desert Cities Mystery series set here in the Coachella Valley, the Corsario Cove Cozy Mystery Series set along California’s Central Coast, The Georgie Shaw Mystery series set in the OC, The Seaview Cottages Cozy Mystery Series set on the so-called American Riviera, just north of Santa Barbara, and The Calla Lily Mystery series where the murder and mayhem take place in California’s Wine Country. Won’t you join me? Sign up at: http://desertcitiesmystery.com.

What about you? What interests you most about A Tangle in the Vines?

10 responses to “Book Review (and a Giveaway!): A Tangle in the Vines by Anna Celeste Burke”