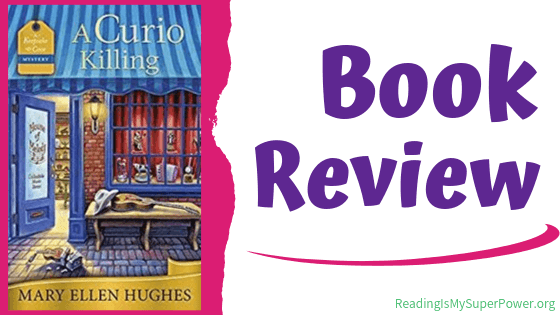 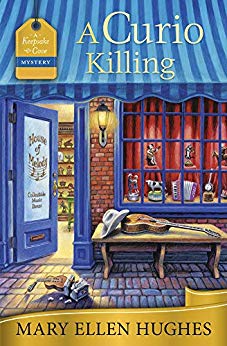 Callie Reed is looking forward to her first Keepsake Cove spring festival. But her excitement dims considerably when she learns that her ex-boyfriend, Hank, will be performing with one of the hired country-western bands. Callie vows to keep her distance, but that changes when the band’s manager, Bobby Linville, is found dead, killed with the music box Hank bought at Callie’s shop.

Hank is soon singing a sad tune in a detention center with Callie his only lifeline. Though thoroughly aware of his many faults, she knows violence and murder aren’t in his blood. But that means one of her fellow Keepsake Cove residents must be hiding a dark secret–something Callie desperately needs to uncover. 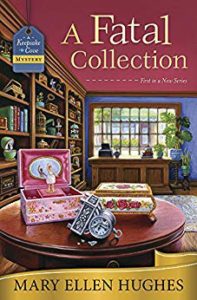 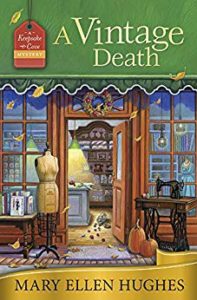 The first thing you’ll love about A Curio Killing is the setting – the quaint Keepsake Cove and its collection of collectibles shops. Top of the list is Callie’s music box, House of Melody, complete with her grandfather’s old music box that chimes “oddly” at critical moments, almost as if to warn or encourage Callie (as the case might be).

Callie is a very likable heroine, and she’s surrounded by a bevy of equally likable supporting characters. Brian, her boyfriend, is steady and classy while also being a little swoony when needed. Tabitha, her assistant, is quirky and endearing all at the same time, though I missed a greater focus on her whimsical outfits this time around, with this fun aspect of her character & the series more in the background than they normally are. There’s also Delia and Lyssa (who I really like!) who provide great backup for Callie’s sleuthing – and are great friends in their own right.

The plot in A Curio Killing takes some intriguing twists with an ex-boyfriend of Callie’s on the one hand and a troubled friend of Delia’s on the other – and a host of other suspects in between. But, while I admire Callie’s gracious spirit to help clear her ex’s name, I felt that her singular focus on doing so put too many other good things at risk in her life. Between Hank and Brian there’s no comparison (Brian is a top-notch guy), and Callie should have been more considerate of her current boyfriend’s feelings, her store, and her own mother’s health instead of spending so much time in Hank’s defense. Her compassion toward him is, as I said, admirable but I don’t like Hank at all and I feel he was using her as he always has.

Bottom Line: A Curio Killing is well-paced and well-written, with a charming setting and a cast of truly likable characters (and a handful of truly unlikable ones, too, as is typical of the cozy genre). While this installment of the series may not be as quirky or endearing as the previous books, it still pulls you into the story even if just for Callie’s sake at times. The case is layered and the timing of new suspects/evidence and various twists and turns is spot on and keeps the pace steady. An interesting read that may have further unpleasant implications for Callie in future books (though I most sincerely hope not because I really like her character!). 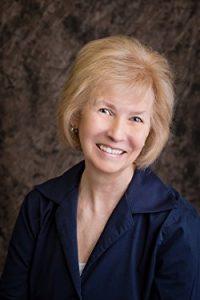 Mary Ellen Hughes is the bestselling author of the Pickled and Preserved Mysteries, the Craft Corner Mysteries, and the Maggie Olenski Mysteries, along with several short stories. The Keepsake Cove series begins with A Fatal Collection and continues with A VINTAGE DEATH and A CURIO KILLING.

What about you? What interests you most about A Curio Killing?

3 responses to “Book Review (and a Giveaway!): A Curio Killing by Mary Ellen Hughes”