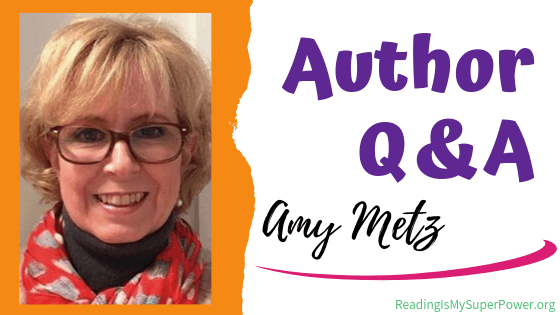 HAPPY RELEASE DAY to Amy Metz and Liars and Lunatics in Goose Pimple Junction! Please join me in welcoming her to the blog today for a chat!

Amy Metz is the author of the Goose Pimple Junction mystery series. She is a former first grade teacher and the mother of two grown sons. When not writing, enjoying her family, or surfing Pinterest and Facebook, Amy can usually be found with a mixing spoon, camera, or book in one hand and a glass of sweet tea in the other. Amy loves unique Southern phrases, cupcakes, and a good mystery. She lives in Louisville, Kentucky. Find out more at http://authoramymetz.com. 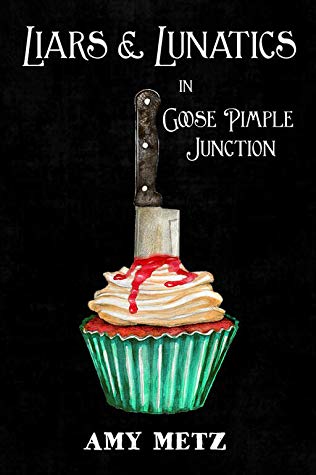 It’s election season, and there’s a new candidate in town. Virgil Pepper is determined to take the job from Goose Pimple Junction’s long-time mayor. Virgil is a charming and charismatic candidate but someone who will say anything (and mean none of it) to get what he wants. Three things top his list: to become mayor, to acquire Jackson Wright’s land, and to make Caledonia Culpepper one of his many conquests.

Wynona Baxter is back, and she’s a new woman. Now Daisy has a new identity, new life, and new business–ironically named Killer Cupcakes. But the town soon finds out that isn’t the only kind of killer in town. Book five of the Goose Pimple Junction mystery series combines political hijinks, delicious cupcakes, Goose Juice moonshine, the ups and downs of finding true love, and, of course, murder.

It is said that “It’s a basic truth of the human condition that everybody lies. The only variable is about what.” Lying in politics, lying for personal and professional gain, lying about an identity . . . What are the folks of Goose Pimple Junction willing to lie for . . . and what are they willing to die for?

Hi Amy! Welcome to the blog!

Amy: Tea. I love sweet tea any time of the year (although I’m cutting back on it lately), and hot tea in cold weather is often my beverage of choice.

Carrie: Oh why can’t sweet drinks be good for us??

Amy: Netflix. I like the variety of Netflix choices.

Carrie: I would say the same, if it weren’t for the Hallmark Mysteries channel 😀

Amy: If I had to pick one it would probably be audiobooks. I like to listen to them in the car, especially long road trips. I couldn’t do without them at night. They help me get to sleep!

Carrie: I have a low  tolerance level for audiobooks, though I keep wishing I liked them more.

Amy: I’ve always been a Coke girl (or Co’Cola as my grandfather used to say), although lately I’ve switched to Diet Coke with Splenda.

Amy: I’m a mom! I think all moms have superpowers. Although being invisible would be pretty darn cool.

Carrie: “I’m a mom!” – yep. enough said. You moms DO have superpowers! At least mine always has. I’m ‘just’ a cool aunt so I have a different set of superpowers… ones that do NOT involve changing dirty diapers 😀


Q: Which books are ‘on your nightstand’?


Amy: Right now I’m reading Bark of Night by David Rosenfelt. I love his Andy Carpenter series. Next up is Where the Crawdads Sing by Delia Owens.


Carrie: Everywhere I turn, someone else is raving about Where the Crawdads Sing. It’s a must-read for me as soon as I have time.


Amy: I included moonshine (Goose Juice) in Liars & Lunatics but knew nothing about it. So I did quite a lot of research on stills and the symptoms and treatment of methanol poisoning.


Carrie: Isn’t the internet a wonderful resource for authors?!


Q: Some authors like to hide little things in their stories. Is there anything you have hidden in Liars & Lunatics? 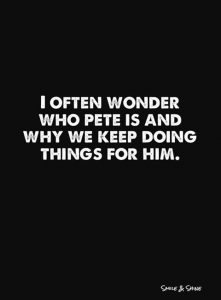 Amy: There is one thing. Backstory: In my books, I sometimes use the term, “for Pete’s sake.” One day, I found a meme that said, “I often wonder who is Pete and why do we keep doing things for him?” I posted it on my Facebook page, and a friend responded to that post with: “That’s my stage name, and I need all the help I can muster, for Pete’s sake.”

So there’s one spot in the book where I exchanged “Pete” for my friend’s name and wrote the line: “For Dennis’s sake.” Now you know the rest of the story!


Q: What is one of your favorite quotes from Liars & Lunatics and why do you love it?

Amy: In Liars & Lunatics, I use a quote at the beginning of each chapter, and I love them all. But my favorite one is: “How awesome would it be if a liar’s pants actually caught on fire?” I love that because it’s both funny and true.

As far as a line I wrote in the book, a favorite would be the moment right after someone dropped dead: “Velveeta stepped forward, swiped her finger through the icing, and said, ‘They say these cupcakes are to die for.’” I like this line because it shows the character’s personality. Someone had just died right in front of her, but she wasn’t bothered at all. And she had the presence of mind to make a joke to lighten the moment and to use a pun on the cupcake store’s name, Killer Cupcakes.

Amy: Thank you for having me here. As they say in Goose Pimple Junction: I preshade it! While I’m deciding whether to write a sixth book in the series, I think I’ll go back to work on a thriller I started several years ago. The working title is Wax Man.

Carrie: I was born in eastern Tennessee and my roots are Appalachian but I still had to say ‘preshade’ it out loud to ‘translate’ – and then I grinned 😉 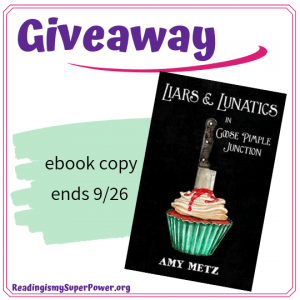 Amy Metz is offering an ebook copy of Liars & Lunatics to one of my readers! Open internationally except where prohibited by law or logistics. This giveaway is subject to Reading Is My SuperPower’s giveaway policies which can be found here. Enter via the Rafflecopter form below.


What about you? What interests you most about Amy Metz and/or Liars & Lunatics?

6 responses to “Author Interview (and a Giveaway!): Amy Metz and Liars & Lunatics in Goose Pimple Junction”