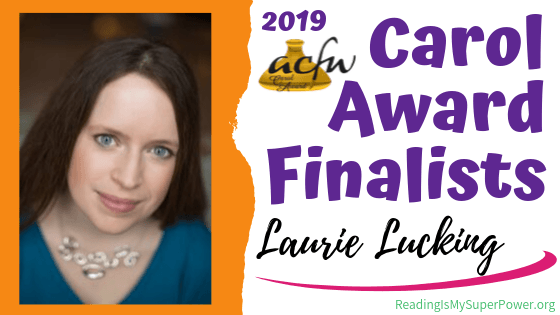 Happy Friday! Continuing through Saturday (culminating with a list of winners), I have the privilege of sharing mini interviews with nearly all of the 2019 ACFW Carol Award Finalists! Today I’m covering the speculative & young adult categories, including Laurie Lucking and her Carol Award nominated novel Common! You can check out a list of all the finalists HERE.

An avid reader practically since birth, Laurie Lucking discovered her passion for writing after leaving her career as an attorney to become a stay-at-home mom. Her debut young adult fantasy novel, Common, won the Christian Editor Connection’s Excellence in Editing Award, and her short stories have been published in Mythical Doorways, Encircled, and Christmas Fiction off the Beaten Path. A Midwestern girl through and through, she currently lives in Minnesota with her husband and three children. Find out more at www.laurielucking.com. 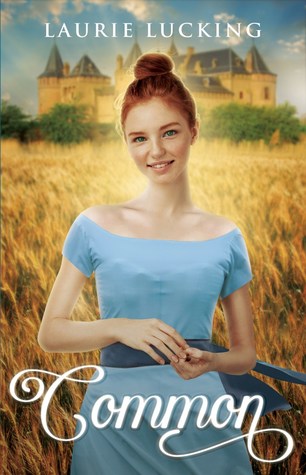 
One person knows of the plot against the royal family
and cares enough to try to stop it — the servant girl they banished.

Leah spends her days scrubbing floors, polishing silver, and meekly curtsying to nobility. Nothing distinguishes her from the other commoners serving at the palace, except her red hair.

And her secret friendship with Rafe, the Crown Prince of Imperia.

But Leah’s safe, ordinary world begins to splinter. Unexpected feelings for Rafe surface just as his parents announce his betrothal to a foreign princess. Then she unearths a plot to overthrow the royal family. Her life shatters completely when the queen banishes her for treason.

Harbored by a mysterious group of nuns, Leah must secure Rafe’s safety before it’s too late. But her quest reveals a villain far more sinister than an ambitious nobleman with his eye on the throne.

Hi, Laurie! Welcome back to the blog!

Laurie: I write fiction because stories have a unique ability to touch both my mind and heart at the same time. Nothing is as engrossing to me as a good book, so being able to feel that same immersion in a world where I get to create my own plot and characters is that much more gratifying. I actually never planned to write Christian fiction, but as I developed the manuscript for Common, I kept hitting scenes in which my main character naturally questioned or reached out to God. Eventually, I realized her story didn’t work without God (or the Luminate, as He is called in my fictional world), and I embraced it. I love the challenge of creating a story that will provide readers with both entertainment and inspiration.

Carrie: ‘her story didn’t work without God’ – there’s a deep spiritual application to be had in that sentence. Love it! 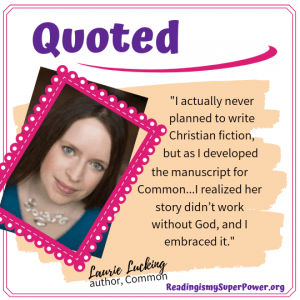 Laurie: Jane Austen’s Pride and Prejudice will always hold a dear place in my heart. The eloquence and wit, the vivid characters, the manners and gowns and parties… *happy sigh* I’ve read that book so, so many times, and I always wish I could just insert myself into that world (I realize the lack of modern conveniences would quickly turn me into a whiny mess, but I just don’t think too hard about that part!). Another favorite that stands out is Ella Enchanted by Gail Carson Levine. Ella is funny, noble, and kind, and something about her narrative made me feel like I was her friend coming along on her adventures. Plus, its delightful combination of fairy tales, sweet romance, and light-hearted fantasy has been a huge inspiration for my own writing.

Carrie: Two of my faves, too!! Even though I don’t really care for Mr. Darcy… but it’s the wit that I love so much in P&P.

Laurie: I think they’d say I’m disorganized but kind 🙂 I start out with a big-picture idea of where my story is going, but then I write scenes as inspiration strikes. Which often means I have a beginning, an end, and a handful of other random scenes that need to be tied together into some kind of cohesive plot. So my characters and I all get to experience at least a few surprises along the way! But I also hate to put my beloved characters through too many trials, so I have a tendency to go easy on them in early drafts. Unfortunately for them, my critique partners always tell me to up the tension and conflict, so by the final version they have a much tougher time of it!

Carrie: hahaha! So they’d have more to say about your critique partners then 😛


Q: Which of your main characters (either in Common or over all you’ve written) is most like you?

Laurie: In Common, the protagonist, Leah, is most like me. We both are shy and struggle with how to handle being the center of attention. In fact, a few scenes in the book where Leah faces light-hearted teasing from fellow servants were inspired by my own experiences in middle school and high school (though of course the setting was very different!). But Leah is much more practical and less emotional than I am, and she’s certainly much braver!

Carrie: that’s the beauty of fiction, yes? Characters who remind us of ourselves get to be braver than we feel we are…


Q: What is something God taught you while you wrote Common?

Laurie: My protagonist has an epiphany toward the end of the book where she realizes everything that happened on her journey up to that point, including many disappointments and hardships, were preparing her for an unexpected but perfect outcome. I still vividly remember writing that scene, then sitting back and thinking, “Ohhhh.” Somehow in teaching my character that lesson, I managed to finally see that same truth in my own life. I imagine God had a good laugh about that one 🙂

Carrie: I love that so much! God never wastes anything we go through – it’s all preparing us for that perfect outcome.


What about you? What interests you most from Laurie Lucking’s Q&A or the Carol Award finalist Common?