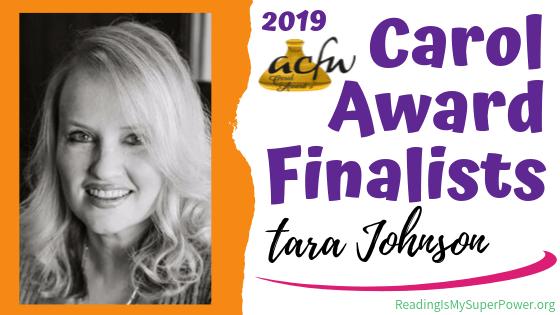 Happy Saturday! All week, I have had the privilege of sharing mini interviews with nearly all of the 2019 ACFW Carol Award Finalists! Today I’m wrapping things up with the debut novel & romance categories, including Tara Johnson and her Carol Award nominated novel Engraved on the Heart! You can check out a list of all the finalists HERE.

➡ Make sure you’re following me on Instagram (@meezcarrie) as I post the winners there tonight, starting around 8PM Eastern. You can also watch the live stream of the awards gala on Facebook.

Tara Johnson is an author and speaker, and loves to write stories that help people break free from the lies they believe about themselves.

Tara’s debut novel Engraved on the Heart (Tyndale) earned a starred review from Publishers Weekly, as well as numerous other accolades. In addition to be published in a variety of digital and print magazines, she has been a featured guest on Voice of Truth radio, Enduring Word radio, television and podcasts. She is a history nerd, especially the Civil War, and adores making people laugh. She, her husband, and children live in Arkansas. Visit her at www.TaraJohnsonStories.com 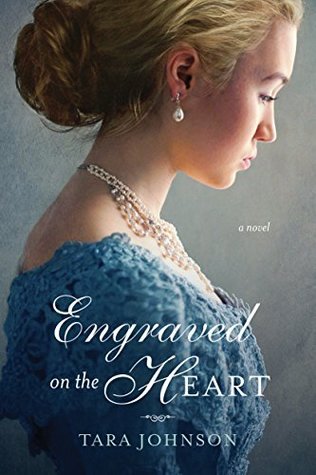 
Reluctant debutante Keziah Montgomery lives beneath the weighty expectations of her staunch Confederate family, forced to keep her epilepsy secret for fear of a scandal. As the tensions of the Civil War arrive on their doorstep in Savannah, Keziah sees little cause for balls and courting. Despite her discomfort, she cannot imagine an escape from her familial confines―until her old schoolmate Micah shows her a life-changing truth that sets her feet on a new path . . . as a conductor in the Underground Railroad.

Dr. Micah Greyson never hesitates to answer the call of duty, no matter how dangerous, until the enchanting Keziah walks back into his life and turns his well-ordered plans upside down. Torn between the life he has always known in Savannah and the fight for abolition, Micah struggles to discern God’s plan amid such turbulent times.

Battling an angry fiancé, a war-tattered brother, bounty hunters, and their own personal demons, Keziah and Micah must decide if true love is worth the price . . . and if they are strong enough to survive the unyielding pain of war.

Hi, Tara! Welcome back to the blog!

Tara: Story is incredibly powerful. It’s like the wonderful Israeli folktale about Story and Truth that goes something like this:

Story and Truth both decided to walk down the streets of their village to see who could attract the most attention. Story was greeted with smiles and joy everywhere she went, but to Truth’s dismay, the villagers cast suspicious looks her way and even turned their backs on her. Thinking her wardrobe must be the problem, she cast off all her clothes and strolled down the street as naked Truth. Doors slammed. People shouted. Truth was in tears.

Story smiled. “Yes, they do need you. Here. Wrap yourself in my clothes. When you are wrapped in the clothing of Story, everyone will accept you. I promise.”

Truth discovered when she was clothed in Story’s pretty attire, she was welcomed with open arms.

Story has a beautiful way of revealing deep, hidden, and raw things to our hearts and minds in an incredibly impactful way. We are lied to so often, and people are yearning for truth . . . but truth is hard to accept in its raw form. Wrapped in story, it tugs the heart and transforms lives. How much more powerful when that message is the Gospel of Jesus.

Carrie: Oh that’s so beautifully expressed & so profound. I love this answer! 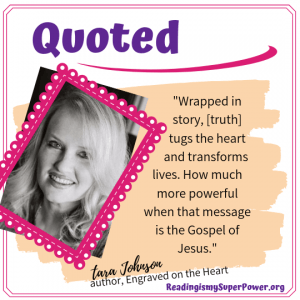 Tara: The Mark of the Lion series by Francine Rivers is one of my all-time favorites. They are so special, I only allow myself to re-read them once every five years so they’ll be fresh each time. One of my other treasured books is Anne’s House of Dreams by L.M. Montgomery. The characters, themes, humor and depth are stunning, and shaped my heart in profound ways as a young woman.

Carrie: It’s been years since I’ve read either of those series – I think I’m due for a re-read of both.

Tara: General Benjamin Butler + Civil War + chamber pots. Ha! Crazy but true. General Butler was so hated by the South, and especially by women, that they had his likeness painted on to chamber pots and sold throughout the Confederacy.

Carrie: hahaha! Oh I like whoever came up with that idea!


Q: Which of your main characters (either in Engraved on the Heart or over all you’ve written) is most like you?

Tara: I would say Keziah from Engraved on the Heart is most like me. We both grew up with epilepsy, struggle with people-pleasing, and have fought to find courage to be our unique selves. Her story reflects much of my own spiritual journey.

Carrie: Keziah is such a great heroine – i loved her!


Q: What is one of your favorite quotes from Engraved on the Heart & why do you love it?

Tara: One of my favorite quotes is, “Never mistake quietness for weakness, nor meekness for timidity.” Some of the bravest people in the world aren’t flashy or loud. They serve in humble quietness. I love the definition of meekness: strength under control. What a beautiful way to live.

Carrie: And all the introverts who read my blog are standing a little taller right now, including me ♥


What about you? What interests you most from Tara Johnson’s Q&A or the Carol Award finalist Engraved on the Heart?

32 responses to “2019 Carol Award Finalists Q&A (and a Giveaway!): Tara Johnson & Engraved on the Heart”