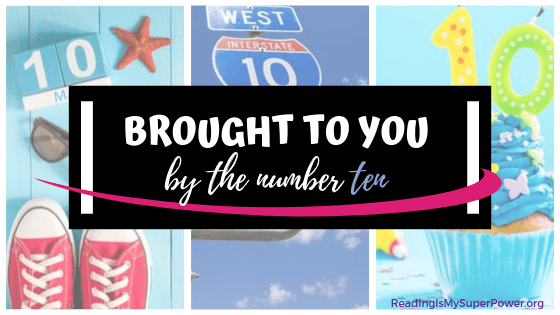 Happy Tuesday! And happy October!! Today’s topic for Top Ten Tuesday with That Artsy Reader Girl is all about the numbers, specifically Book Titles with Numbers In Them, submitted by Emma at Words and Peace. I thought it would be fun, since this IS top TEN tuesday, to focus on that particular number… but not in the way you might think 😉

After inheriting his title from his brother, the margrave has two weeks to find a noble bride. What will happen when he learns he has fallen for a lovely servant girl in disguise?
The Beautiful Pretender by Melanie Dickerson

The number on the population sign might seem insignificant, but a few short steps from the beaten path, there’s more than meets the eye.
Written in the Stars by Christina Coryell

When a handsome Texas Ranger appears on her doorstep with an abandoned baby, Thea isn’t sure her heart can take it.
A Tender Hope by Amanda Cabot

Suddenly, Kate finds that while doling out wisdom to others may be easy, asking for help is tougher than it looks, and following your own advice is even harder.
Listen to Your Heart by Kasie West

In the aftermath of tragedy, Grace hopes to reclaim her nephew from the relatives who rejected her sister because of her class. Unexpectedly, she begins to fall for the boy’s guardian, who is promised to another.
The Best of Intentions by Susan Anne Mason

Jack and Hattie end up in a mess that puts her dreams in peril–and tests Jack’s resolve to remain single.
The Lieutenant’s Bargain by Regina Jennings

Denied tenure in the wake of a scandal and left penniless by the ensuing divorce, Emma packs up what few worldly possessions she has left and heads to England on a quest to find the missing letters of Jane Austen.
Jane Austen Ruined My Life by Beth Pattillo

Welcome to Smitten, Vermont. With the help of four friends, it’s about to become the most romantic town in America.
Smitten by Coble, Billerbeck, Hunt & Hunter

As Mia grapples with how to make a difference in an overwhelmingly difficult world, circumstances force her to choose between the life she thought she wanted and the unexpected life she has built.
The Enlightenment of Bees by Rachel Linden

Posing as her sister for Christmas is the only way to save her, but Maggie Lofton needs help—even if it means working with her twin’s cowboy ex-boyfriend, Liam Pike.
Deadly Christmas Pretense by Dana Mentink

What about you? Which of these books brought to you by the number TEN appeal to you most? Did you add any to your TBR list?

27 responses to “Top Ten Tuesday: Brought To You By The Number TEN”