Welcome to the Blog + Review Tour & Giveaway for Fate of the Redeemed by Chad Pettit, hosted by JustRead Publicity Tours!

An angel with amnesia. A demon with a vendetta. The man caught in their crossfire.

Lester Sharp has been given a second chance to live a life of compassion, but his decision to follow God will be tested when his estranged father calls to tell him his brother has been killed in combat. A demon unleashes a series of attacks on him, and someone he thought was lost to his past emerges.

Lester is guarded by the angel, Draven, but when Morane catches the watcher off his guard, Draven loses his memory and finds himself being held prisoner in a remote Somali village. His only ally is Ibrahim, a man who finds out his son has been murdered by extremists when his granddaughter appears out of nowhere and somehow possesses supernatural powers.

As Morane’s fury is unleashed, time is running out for Lester, and Draven’s fate is in the hands of a man whose faith is being pushed to the limit.

While Lester fights for his life—and for his soul—will he make the right choices, or will he decide—once and for all—that he doesn’t need God? And why is one man so important in the midst of spiritual warfare?

Chad Pettit grew up lost in the world of fantasy fiction but alienated from a knowledge of God. With no real direction in his life, he shipped out for basic training twelve days after high school. He continued down a path of sin and destruction through two combat tours to Iraq, but then God pulled back the blinders, and he met his Lord and Savior. One passion that never left him was his love for fiction, and in 2013 he went back to school and earned his degree in English. This helped him develop his craft, spending long hours pounding away at the keys until his battles with guilt, fear, and shame came alive on the page. 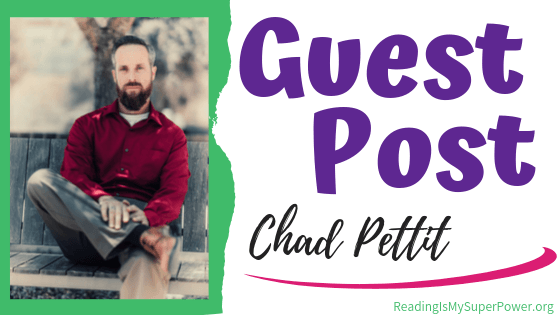 Discovering a Genre in Fate of the Redeemed

by Chad Pettit, author of Fate of the Redeemed

When you start writing professionally as a fiction writer, one of the first lessons you learn is that you need to decide on a genre and then learn everything you can about that genre. Learn the typical plot structure, the tropes, and all of the nuances that readers expect. I have been so good at failing that lesson. I understand the principle of meeting the needs of readers, and I think that’s very important, but I had to figure out what sort of writer I am through the journey of writing itself.

I always thought I was a high fantasy writer, but the more I attempt to write in that genre the more I realize that I don’t enjoy that genre as much as I used to think. I’ve also written biblical fiction, but I didn’t even know that was a genre until after I’d self-published a book in it. Throughout that journey, though, I’ve always enjoyed reading books with elements of suspense, and I have a strong influence from classical stories. One day a book just sort of came to be, and it happened to have elements of suspense. The crazy part? I didn’t know that; the creative director at Ambassador International pointed it out to me.

And that’s when I realized I really enjoy writing suspense, so I became more intentional about it. While all of that was going on, I was learning about spiritual warfare. Since I became a follower of Christ and a student of the Bible, I’ve had a passion for studying that subject. I’m fascinated by passages from the Bible that give us glimpses into the spirit realm such as Zechariah one and Daniel ten. Somewhere in the midst of all of that discovery, a battle between an angel with amnesia and a demon with a vendetta popped into my mind. Weird, I know, but an extra creative mind is sort of a prerequisite for a speculative fiction writer.

The plot for Fate of the Redeemed came to me, and I focused on the characteristics I was most familiar with for suspense without relying on some of the overplayed tropes that make me roll my eyes while I’m reading. To me, suspense is all about keeping your readers turning the page, hinting that something is coming but building the anticipation. I think there’s a lot of room to play in that definition, and it’s one of the reasons I love it so much. There are other elements that play a major role such as close encounters between the hero and the villain, the hero losing multiple times until he or she learns a valuable lesson, and the intertwining of multiple plot threads. This stuff is just so much fun to write, and I’m thankful God has given me this medium.

But then things got strange. During the editing process of the preview chapter, my editor (her official title is The Editor of Fate) told me that I reminded her of Frank Peretti. Imagine my shock. I’d heard of Frank Peretti, but I’d never read one of his novels. When I looked him up, I kept seeing this phrase: spiritual warfare fiction. My response was something to the effect of: “That’s a thing?” That’s when it was time to pull out the old research skills, and I discovered that there are many authors who write about angels and demons. Seriously, why didn’t anyone tell me? Since that time, I’ve read a couple of Peretti’s books, particularly This Present Darkness and The Oath. I highly recommend both titles, by the way. I’ve read others, and I’m working more books in the genre into my TBR pile, so I can’t say I know all of the conventions for my genre.

Maybe that makes me a less trustworthy author. Maybe the fact that I’m willing to admit this makes me more trustworthy. I don’t know. What I do know is that with everything I write, I ask the Lord for guidance and not a single word is written before time in prayer. I know that my goal is to empower and encourage followers of Christ to live their best lives with the Lord Jesus Christ in the lead. I also know that pioneers forge their own way, and guys like Frank Peretti are pioneers of Christian Fiction.

So what can you expect from Fate of the Redeemed? It’s a suspense novel, but it’s also a novel that deals with spiritual warfare and tackles rubber-meets-the-road Christianity. There are messages and themes grounded in the Word of God, epic battles, characters face loss and difficult choices in impossible situations, and there is hope. Regardless of the category you attach to a book written from a Christian worldview, hope is what we look for when we open the pages of these books. But hope that is seen is not hope, as the Bible clearly teaches us. Hope comes through trials, and the characters in this book most certainly experience their share of trials. I pray you find hope as you turn the pages.

Be sure to check out each stop on the tour for more chances to win. Full tour schedule shown below. Giveaway will begin at midnight October 16, 2019 and last through 11:59 PM EST on October 23, 2019. US only. Winner will be notified within 2 weeks of close of the giveaway and given 48 hours to respond or risk forfeiture of prize.

What about you? What interests you most about the post from Chad Pettit and/or Fate of the Redeemed?

7 responses to “Guest Post (and a Giveaway!): Chad Pettit & Fate of the Redeemed”