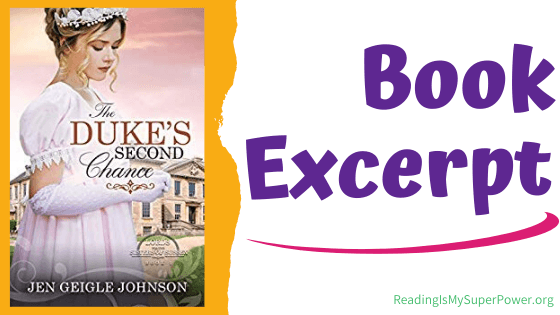 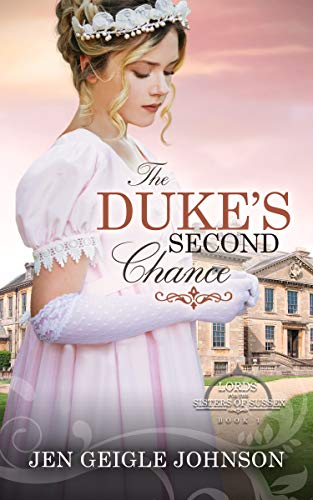 Second chances often come from surprising places. Will the Duke find another chance at love when everything seems to be combining against him?

Gerald feels as though he’s lost everything when his wife takes her last breath.

Amelia’s world turns upside down when the Duke of Granbury steps into her tea shop and leaves with her heart.

But when a secret from Amelia’s past unveils possibilities, will the duke get a second chance at love from an unexpected source?

Buy this first book in a Regency romance series for a taste of deep loyal friendship, beautiful second chances, and the path to heal a heart.

Look for the other books in the series:
The Earl’s Winning Wager
Her Lady’s Whims and Fancies
Suitors for the Proper Miss
Pining for Lord Lockhart
The Foibles and Follies of Miss Grace

The duchess’s labor had started in the carriage while returning to their London townhome. Perhaps her pinched face and general malaise during the earlier parts of the day should have clued the duke in that all was not right, but she gave no complaint, and now he was left only to wish she had expressed a word or two of her condition. He’d carried her himself into her room, her gowns wet through. At last on her bed, he was relieved she would be in the hands of someone more experienced than he who knew how to care for her. But as he brushed the hair from her forehead, as he gazed on his beloved’s face, he couldn’t bear to part, not yet, not with her in the utmost misery.

Gerald clasped his wife’s hands in his own, hoping the strength of his love for her would scare away the pain.

Her face pinched, and she doubled over, large drops of sweat falling off her forehead. “Don’t leave!”

“I’m here. Our illustrious midwife will have to unleash her dragon claws on me before I leave.”

That brought a tiny laugh from his wife which gratified Gerald to no end. He tried to keep up a form of banter with Camilla who was clenched in the pains of childbirth, but in truth, if she wasn’t gripping him so tightly, everyone in the room would see the trembling in his own limbs. She cried out. “It’s getting worse. Is this supposed to happen?” Her eyes, wide with terror, made him frantic.

“Someone do something!” He had tried to find his deep barreling voice but the order came out more of a squeak than anything.

The midwife sidled up to him, “Pardon me, Your Grace. If I may?” She attempted to separate their hands, but he and Camilla resisted, gripping tighter. She continued, “She is doing wonderfully. Her body is performing just as we would expect it to. Everything is progressing as it should. Soon you will have a new baby.”

Camilla rolled toward him onto her side, moaning and writhing on the bed.

“If I might?” The midwife gently tried again to pry their fingers apart, but Camilla clung to him. “No.” Her no came out as a long drawn out syllable and he almost stepped back in fear. But her grip on him offered no mercy, and no movement.

“I’m here.” He stated his determination to remain at her side. Though even to himself, his tone sounded less sure.

He hesitated one more moment, then Camilla screamed as though she were on a torture rack and released his hands, clutching instead the soothing cool fingers of their midwife, her cooing tones soothed Gerald as much as Camilla.

Gerald scooted further away. The door opened behind him. “Your Grace. I came as soon as I could.”

The doctor held the door open for him. “I’m presuming you were on your way out?”

Gerald nodded. “Yes, quite.” Just for a moment he would step into the hallway.

His wife turned eyes to him, beautiful, shining eyes full of love. “I shall be finished shortly they tell me.” Then her body clenched again and she curled into a ball. “Make it stop. Please make this stop.”

She waved him away, clenched in apparent agony.

The doctor shooed him out the door and before it closed firmly behind him, Gerald heard a quiet, “I love you too.” Gerald leaned up against it, breathing heavily. What a daft thing to do, impregnate his wife. What in the blazes was he thinking doing such a thing to them both? He closed his eyes, her scream audible through the thick door.

“Oh this will not do.” His friend’s voice lessened the strain that wound inside Gerald like a tight net.

Gerald whipped his eyes open, a welcoming smile interrupting the pain of his moment. “Cousin Morley. I’ve ruined her. She’ll never forgive me, I’m certain, and she’s in the most incredible pain.”

Another scream interrupted. The door flung open and a maid ran out, carrying linens and a bucket. The door shut firmly after her.

Morley gripped his shoulder. “Come, man. This is not the place for husbands. Wives always seem just fine after it’s all over.”

“I don’t know. She seemed determined I stay by her. I’m taking a break.” He swallowed.

“No, they say that at first, but what woman wants you to see her like that? It’s only going to get worse. You should have seen my sister’s household. The whole place was in a upheaval, everyone thinking their lady was going to fire them all.”

Morley considered his friends words. “And when it was over, she was recovered?”

“Certainly. She was in the best of moods, gave them all an increase in pay.” Morley put an arm across his shoulder. “Come. We don’t belong anywhere near her. It’s off to the study with your fine brandy.”

Gerald nodded. “Indeed. That sounds like just the thing.” He hesitated a moment more and then allowed the good will of his dearest friend to lead him along to a brighter manner in which to pass the time.

The farther away from her bedroom, the more the fibers of worry lessened, and Gerald told himself his wife was in the best of hands, that women gave birth all the time and that surely she would be well. He pushed away a persistent, niggling worry that something terrible was happening, pushed it as far as he could. For just as his friend said, what more could he do? She would be well soon enough and he could meet his son or daughter. Their lives would continue as before.

Morley made himself comfortable in the study as he always did. Leaning back in his favorite chair, he said, “Remember when we convinced Joe that his cow was about to give birth?”

Gerald snorted, almost losing his mouthful of brandy. “Clueless Joe believed us, with not a bull in sight on their estate.”

Morley laughed and raised his cup in the air. “To Joe.”

They downed their cups, and Morley poured two new ones.

“Thanks for being here.”

“Would I miss the best thing you’ve ever done?”

Gerald eyed him with suspicion. “That sounds very sentimental…”

“We hope. If your child is anything like Her Grace, then we’re sure of you doing a service to society…”

“Then we’ve just inflicted society with another Campbell, and I don’t know how I feel about that.”

“Being a Campbell yourself.”

“Precisely. I know what a pox we are on the land.”

Gerald downed his second cup, grateful for a reason to laugh. “Tell me cousin. Will there ever be another Campbell in your life?”

“If my mother has anything to say on the matter.”

“And what say you? Surely someone has caught your eye?”

Morley looked away, his face drawn in an uncharacteristic frown. “I’ve found women to be nothing more than a silly, grappling means of entrapment.” He coughed. “Present wives excluded.”

Gerald sympathized with his friend. Finding a woman to marry should not be so difficult. He felt supremely lucky, blessed, in his marriage to Camilla. They had fallen in love straight away, both of them happy to pursue a courtship, their parents pleased, society approving, but he knew it wasn’t so easy for most people.

“Come, man. I shall devote the next bit of my life to making you the happiest of men.”

Morley held up his hands and shook his head. “Assistance not necessary. In fact, quite unwelcome.”

“Think nothing of it. I want you just as happily situated as I am, for marriage has brought nothing but the best of feelings. Today’s activities aside, naturally.”

A man cleared his throat in the doorway. 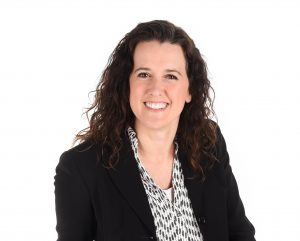 An award winning author, including the GOLD in Foreword INDIES Book of the Year Awards, Jen Geigle Johnson discovered her passion for England while kayaking on the Thames near London as a young teenager.

She once greeted an ancient turtle under the water by grabbing her fin. She knows all about the sound a water-ski makes on glassy water and how to fall down steep moguls with grace. During a study break date in college, she sat on top of a jeep’s roll bars up in the mountains and fell in love.

Now, she loves to share bits of history that might otherwise be forgotten. Whether in Regency England, the French Revolution, or Colonial America, her romance novels are much like life is supposed to be: full of adventure.

Check out my interview with Jen Geigle Johnson HERE 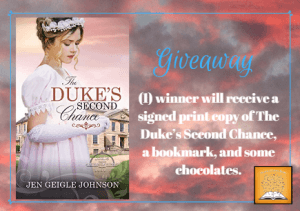 
This giveaway is hosted by SLB Tours, not RimSP
Follow along with the tour by clicking the banner below

What about you? What interests you most about The Duke’s Second Chance?

One response to “Book Spotlight (and a Giveaway!): The Duke’s Second Chance by Jen Geigle Johnson”