today’s book: the hope of christmas past by stephenia h mcgee

As I said earlier, Christmas is still 39 days away according to Google (I don’t do my own math, folks), BUT now ’tis the season when I start craving cozy Christmas reads. (Okay – I crave them all year round but now’s when I can get away with talking about them LOL) This year I’m continuing my annual blog series spotlighting new and recently-released Christmas reads, and I’m super excited! Christmas books make me happy! 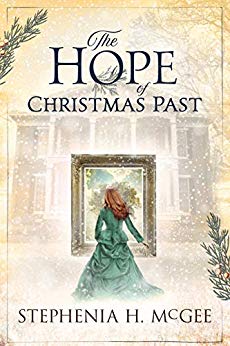 When a mysterious painting offers her a trip to the past, will Isla find new hope for her future?

On the brink of aging out the foster system, the last thing Isla Laird wants is to spend Christmas in an old-fashioned plantation. What’s the point of bonding with her foster mom when it’s too late to ever be adopted? But when a mysterious painting suddenly thrusts her into the nineteenth century, Isla is forced to face hurts and memories she’s long tried to bury. With time running out and her heart in tatters, can God use an impossible miracle to bring Isla hope for a new future?

traditions of a banned christmas

by Stephenia H McGee, author The Hope of Christmas Past

Did you know Christmas was effectively banned in Scotland for almost 400 years? In 560 Scotland split from the Catholic Church during the Scottish Reformation.  In 1583 the Glasgow Kirk at St Mungo’s Cathedral (also known as Glasgow Cathedral) ordered the excommunication of those who celebrated Yule (which was celebrated on the twelve days of Christmas), while elsewhere in Scotland, even singing a Christmas carol was considered a serious crime. 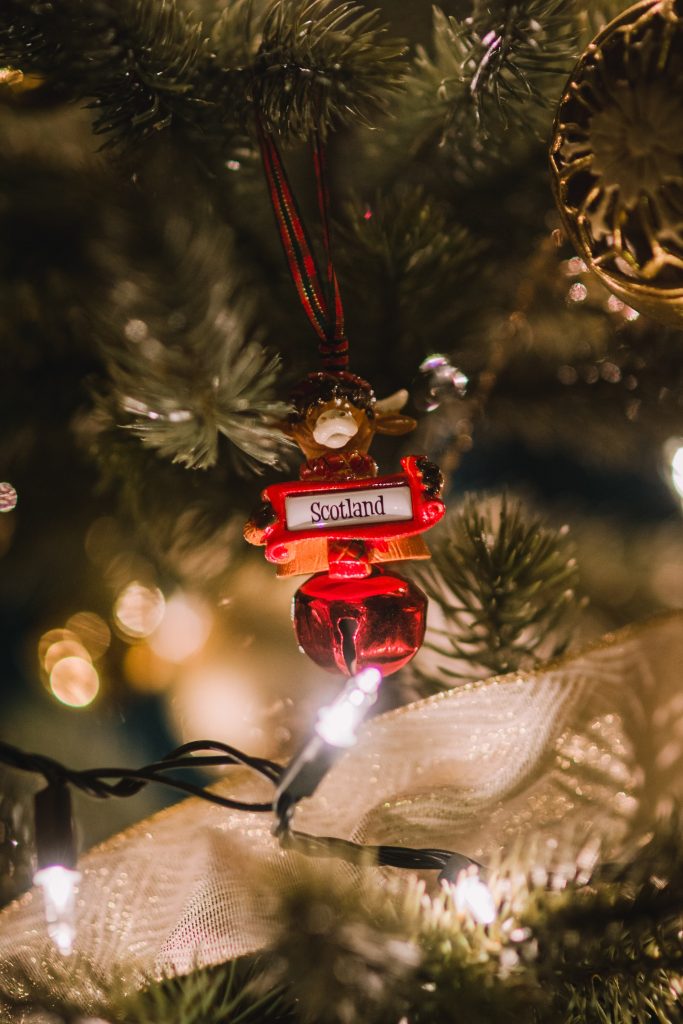 Finally in 1640 an Act of Parliament of Scotland made the celebration of Yule illegal. This ban was officially repealed in 1712, but the Church continued to frown upon the festive celebrations. Punishments for celebrating Yule were harsh, and there was no public holiday for the Scottish people on Christmas Day. It wasn’t until 1958 that Christmas became an official holiday.

Since the Scotts couldn’t celebrate Christmas, they threw quite a bit of energy into Hogmanay, the New Year Celebration. Full of fun traditions like being the “first-footer” (the first guest of the New Year to bring good luck) and rounds of singing Auld Lang Syne. To this day, the Hogmanay celebrations in Edinburg are some of the largest New Year’s Eve parties in the world.

In The Hope of Christmas Past, Isla falls through a painting and finds herself back in the 1800s at Belmont Plantation. The lady of the house, Ella, is a fiery Scottish lady who, despite the ban her father’s homeland placed on the holiday, is determined to enjoy all the festivities of both Christmas and Hogmanay. As Ella shares her Scottish traditions, Isla begins understand the meaning of family and her place in the world.

I’d like to share a few of the traditional Scottish recipes that Ella makes with her daughters and Isla, which you will find in the back of The Hope of Christmas Past. If you get a chance to try any of these out, let me know what you think! 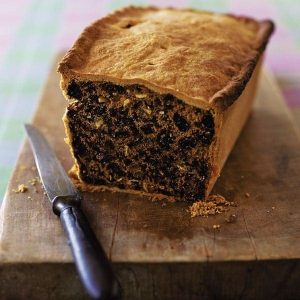 This moist, fruity cake covered with rich pastry is traditionally eaten at Hogmanay (New Year). Make it in advance so the flavors have time to mature.

Grease an 8-inch loaf tin. Rub the fats into the flour and salt and then mix in enough cold water to make a stiff dough (remember, it is going to line the tin). Roll out the pastry and cut into six pieces, using the bottom, top and four sides of the tin as a rough guide. Press the bottom and four side pieces into the tin, pressing the overlaps to seal the pastry shell.

Mix the raisins, currants, almonds, peel and sugar together. Sift in the flour, all the spices and baking powder and bind them together using the brandy and almost all the egg and add enough milk to moisten.

Pack the filling into the lined tin and add the pastry lid, pinching the edges and using milk or egg to seal really well. Lightly prick the surface with a fork and make four holes to the bottom of the tin with a skewer. Depress the center slightly (it will rise as it cooks).

Brush the top with milk or the rest of the egg to create a glaze.

Bake in a pre-heated oven at 325F/160C/Gas Mark 3 for 2½ to 3 hours. Test with a skewer which should come out clean; if not, continue cooking. An uncooked cake sizzles if you listen closely!

Cool in the tin and then turn onto a wire rack. Cool thoroughly before storing until Hogmanay. 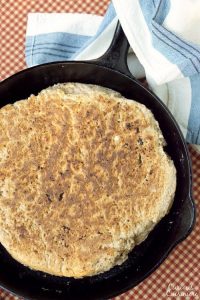 Oatcakes are a very traditional part of the Scottish diet. They were cooked on a griddle (a flat iron pot placed over the fire) but you can use a regular skillet or frying pan. In the story, this is what Isla pulls out of the oven.

Mix the oatmeal, salt and bicarbonate and pour in the melted fat into the centre of the mixture. Stir well, using a porridge stick if you have one and add enough water to make into a stiff paste. Cover a surface in oatmeal and turn the mixture onto this. Work quickly as the paste is difficult to work if it cools. Divide into two and roll one half into a ball and knead with hands covered in oatmeal to stop it sticking. Roll out to around quarter inch thick. Put a plate which is slightly smaller than the size of your pan over the flattened mixture and cut round to leave a circular oatcake. Cut into quarters (also called farls) and place in a heated pan which has been lightly greased. Cook for about 3 minutes until the edges curl slightly, turn, and cook the other side. Get ready with another oatcake while the first is being cooked.

An alternative method of cooking is to bake them in an oven at Gas5/375F/190C for about 30 minutes or until brown at the edges. The quantities above will be enough for two bannocks about the size of a dessert plate. If you want more, do them in batches rather than making larger quantities of mixture. Store in a tin and reheat in a moderate oven when required. 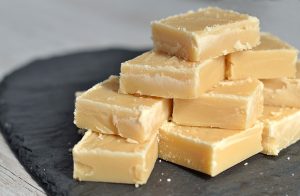 The Scottish tablet is a super-sweet, very sugary treat. It’s not soft like fudge, or chewy like toffee, but more crumbly in texture. The taste is one-of-a-kind. Impress your friends and family this year with a unique treat!

This generations old recipe has been converted to modern US measurements, so it’s easy for you to give it a try.

YOU NEED TO KNOW: 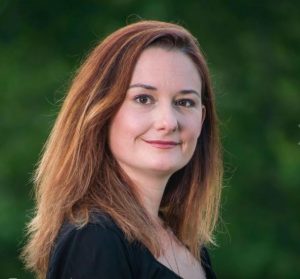 Winner of the 2012 RONE Best Inspirational Book of the year (2012) and author of seven Historical novels, Stephenia H. McGee has a fascination with hoop skirts and ball gowns, Greek revival homes and horse-drawn carriages, quirky Southern sayings, and home-grown recipes. She currently lives in Mississippi with her husband and two boys, (accompanied by their two spoiled dogs and mischievous cat) where she writes stories of faith, redemption, and stories steeped in the South.

Visit her website at www.StepheniaMcGee.com and be sure to sign up for the newsletter to get sneak peeks, behind the scenes fun, the occasional recipe, and special offers.

Join Stephenia H. McGee’s Faithful Reader Team on Facebook to find out the latest on what is going on in her writing and chat about book-related topics. You can also catch her on Twitter & Pinterest. 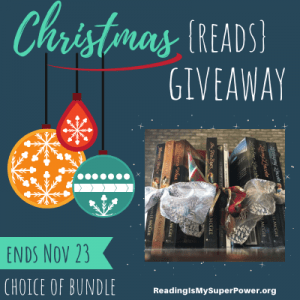 Stephenia H. McGee is offering one of my readers winner’s choice of one of these autographed book bundles:

Belmont Plantation book set
(In His Eyes, The Heart of Home (novella), The Hope of Christmas Past (novella))

*US residents only. International winner will select from ebook editions. This giveaway is subject to Reading Is My SuperPower’s giveaway policies which can be found here. Enter via the Rafflecopter form below.


What about you? What interests you most about The Hope of Christmas Past? Have you ever made any of the recipes that Stephenia H McGee included in her post? Which one would you like to try first?

32 responses to “It’s Beginning to Look A Lot Like Christmas (Reads) GIVEAWAY: The Hope of Christmas Past”