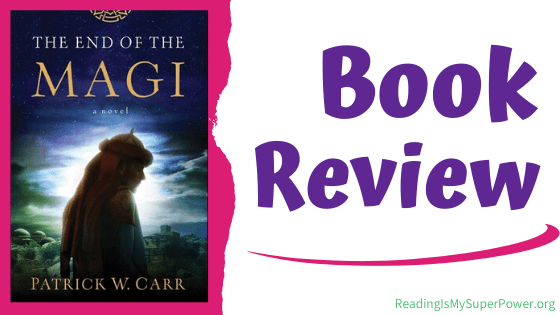 The End of the Magi on tour with Prism Book Tours 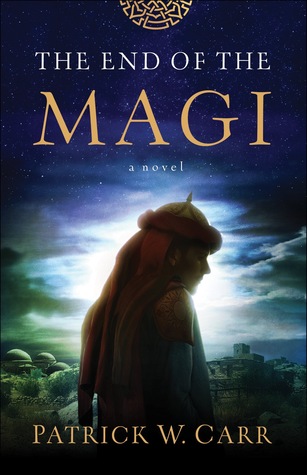 Centuries before the magi arrived in Bethlehem,
a prophecy sets a young magus on his path . . .

Following his vision of the coming Messiah, the prophet Daniel calls forth a select group of men who will count down the calendar until the arrival of Israel’s promised king. Centuries later, as the day draws near, Myrad, a young magi acolyte, flees for his life when his adoptive father and others are slain by a ruthless Parthian queen.

Equipped with very little, in haste Myrad escapes the city and, searching for a way to hide from the soldiers scouring the trade routes, tries to join the caravan of the merchant Walagash. The merchant senses that Myrad is keeping secrets, but when the young man proves himself a valuable asset, an epic journey filled with peril, near captures, and dangerous battles begins.

With every day that passes, the calendar creeps closer to the coming Messiah. And over everything shines the dream of a star that Myrad can’t forget, and the promise that the world will never be the same.

Praise for the Book

“Carr retells the story of the Magi in this bustling biblical adventure . . . . Myrad’s divine vision of the star and his arduous trek battling his own physical problems to pay homage to the Messiah capture the majesty of biblical narratives and will appeal to Christians well versed in scripture.”–Publishers Weekly

“Patrick Carr brings us a captivating tale in The End of the Magi. Based on the Holy Bible, he weaves a fictional tale of the adventures of a group of magi from the east looking for the Messiah. Myrad is a strong main character even though he doesn’t see himself as strong. He has great character traits and these help him find triumph over tragedy. . . . The End of the Magi is a great holiday read and gives us much to think about in our journey to know God better.”–Fresh Fiction

The End of the Magi brings to life an unfamiliar aspect of the familiar Christmas story – in such a way that you’ll never view the magi or their gifts the same way.

I confess that the magi are usually sort of an afterthought for me as I reflect on Advent & the Nativity. But in Carr’s new historical fiction, the magi become men with hearts and souls and dreams. Particularly dreams. The author’s imagining of what could have happened in the magi’s journey feels rooted in solid research, giving it plausibility and imploring the history geek in me to learn more about what transpires over the course of Myrad’s determination to follow the star & find the King.

Myrad is a wonderful protagonist, the perfect one for this story. He is authentically flawed but stronger than he thinks he is, yet – at first glance with his weak form & club foot – he seems the least likely to do great things. But, isn’t that just like God? “It’s almost as if God takes delight in accomplishing His end in the most unlikely way possible…”

Bottom Line: The End of the Magi is captivating and soul-stirring. While it gets a bit long in the middle, you still won’t be able to put it down because you are fully engaged with the characters. A fascinating creative look at men who only get a few sentences to their name in Scripture yet undoubtedly endured a long journey to find the King. Love the dual meaning of the title as well (hint: I quoted one meaning above.) Not your average Christmas read – and that’s a good thing! 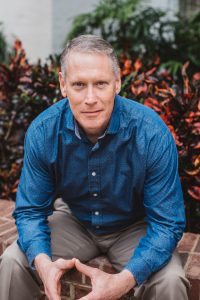 Patrick W. Carr is the author of the acclaimed fantasy series The Staff and the Sword. A Cast of Stones won the 2014 Carol Award for Speculative Fiction and the 2014 Clive Staples Award. A Cast of Stones and The Hero’s Lot were both finalists for 2014 Christy Awards. He teaches high school math and makes his home in Nashville, Tennessee, with his incredible wife, Mary, and their four sons.

Other Books by Patrick W. Carr 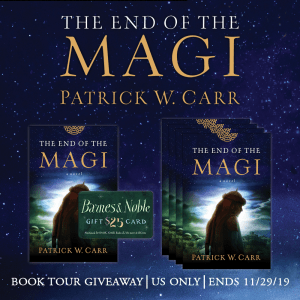 
This giveaway is hosted by Prism Book Tours, not RimSP
Follow along with the tour by clicking the banner below 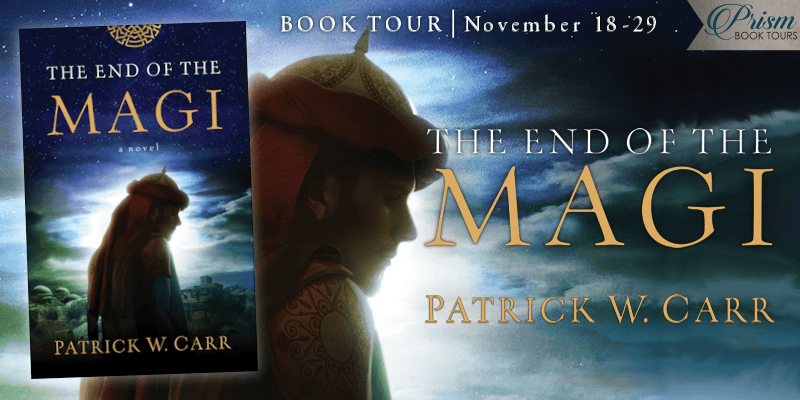 What about you? What interests you most about The End of the Magi?

11 responses to “Book Review (and a Giveaway!): The End of the Magi by Patrick W. Carr”