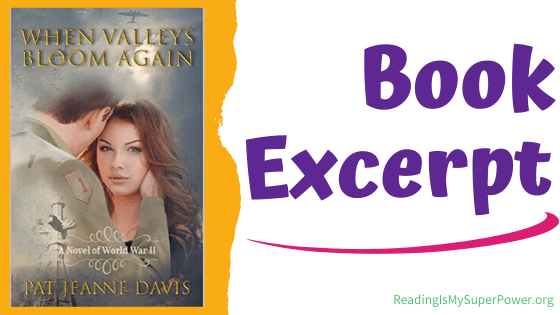 In the wake of yesterday’s 78th anniversary of the bombing of Pearl Harbor, author Pat Jeanne Davis is sharing an excerpt from her World War II – When Valleys Bloom Again. 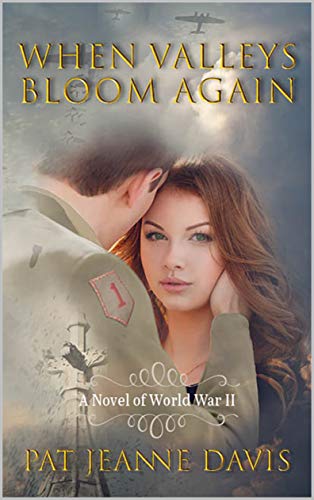 As war approaches in 1939, Abby Stapleton’s safety is under threat. Her father, a British diplomat, insists she go back to America until the danger passes. Abby vows to return to her home in London—but where is home? With her family facing mortal danger so far away and feeling herself isolated, she finds it hard to pray or read the Bible. Did she leave God behind in war-torn London too? Abby becomes friendly with Jim, a gardener on her uncle’s estate.

Jim can’t get Abby out of his mind. Did she have a sweetheart in England? Was it foolish to think she’d consider him? He curses his poverty and the disgrace of his father’s desertion and drunkenness haunts him. Can he learn to believe in love for a lifetime and to hope for a happy marriage?

Abby couldn’t know the war would last a long time, nor that she would fall in love with Jim—soon to be drafted by the US Army—or that she’d have to confront Henri, a rejected suitor, determined by his lies to ruin her reputation and destroy her faith in God’s providence. Will she discover the true meaning of home and find happiness with Jim?

After attending church with her aunt and uncle, Abby parked the car, ran into the house and raced upstairs. She would meet Jim on the river bridge for a walk, then they’d attend the concert in the park. Perfect weather for a perfect Sunday.

She switched on the radio and sat at the vanity dressing table, half listening. Even before that mad dash a few minutes ago, she was breathless. Tugging at the snags in her long hair, she replayed that enchanted scene in the conservatory, unable to take in fully the rapid turn of events. First, she was friendly with Jim, then forced to be aloof, then more than friends, and—who knows what next? She still couldn’t believe it.

At the full-length mirror on the door, she turned sideways. “Best I can do,” she said out loud, before glancing at the clock. It would take ten minutes to reach the bridge.

Dropping on all fours, she rummaged beneath the bed for her walking shoes.

The symphonic music stopped, followed by a burst of staccato speech. Cocking her ear, she caught one sentence.“The Empire of Japan has attacked the U.S. naval base at Pearl Harbor.” It was enough. Her spine stiffened and she sucked in her breath. It’s here.

In her stocking feet, she ran down the hall to her uncle’s office.

He sat at his desk, head resting in his hands.

She tapped on the door, trembling.

He looked up. “You heard, then?” He sighed. “I suppose we shouldn’t be surprised. All the signs were there. Still …”

She dropped into the chair beside him. “Does this mean America will go to war?”

He stared out the window “Nothing short of it.”

“Where is Pearl Harbor?”

He eased himself out of his seat, shuffled to a large world map mounted on the wall and peered at it through a magnifying glass. “Right here.”

Abby went over to where he stood.

“See. Hawaii,” he said, stepping aside for her. “A big naval facility.”

Abby turned away. “Do you think Aunt heard?”

“I’ll go and break the news to her myself.” Uncle Will put his arm around Abby’s shoulder, and they walked across the room.

At the door he stopped and half-turned, his voice quivering. “I’m sorry for all you young people. I think our generation has let you down.” He shook his head. “The sins of the fathers are visited upon the children once more.”

Taken aback and unable to think of anything to say, she watched him disappear down the hallway.

She whirled around and caught sight of her parents in the photograph her uncle kept on his desk. It was an old one, early 1920s, taken when their own bitter memories of the Great War were probably still fresh. Now she would be a comrade with them in their present suffering back in England. But even this meager consolation yielded to a fear closer at hand. What would all this mean for Jim?

Seventy eight years ago today on December 8, 1941 in the chaotic hours after radio bulletins alerted US residents of the attack, President Franklin D. Roosevelt on a national radio broadcast went before a joint session of the U.S. Congress and began with the following words: “Yesterday, December 7, 1941 — a date which will live in infamy — the United States of America was suddenly and deliberately attacked by naval and air forces of the Empire of Japan.” The President requests a declaration of war against Japan. 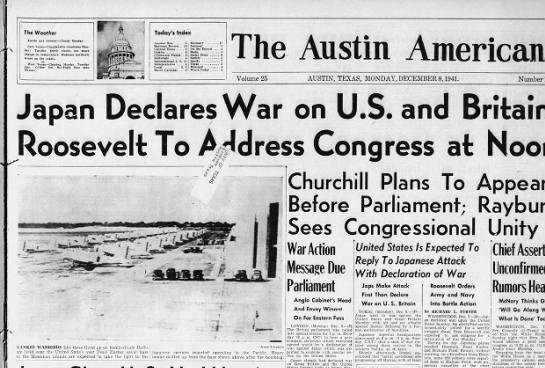 This horrific act by the Empire of Japan and the President’s course of action that swiftly followed would forever have a significant impact on the life of Abby Stapleton, daughter of a British diplomat, and her future with Jim Wright, the man she loves. 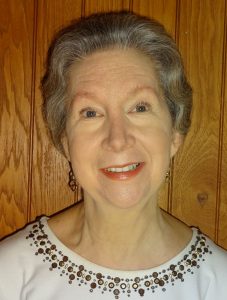 PAT JEANNE DAVIS lives in Philadelphia, Pa with her British-born husband, John. They have two grown sons. She enjoys flower gardening, genealogy research and traveling with her husband. Pat has published essays, short stories and articles online and in print. She has a keen interest in twentieth-century American and British history, particularly the period of World War II. Pat’s father-in-law served in the British Eighth Army during the war. When Valleys Bloom Again is her debut historical romance set in that era. She is a member of the American Christian Fiction Writers and the Historical Novel Society. Pat loves to hear from her readers. Subscribe to her newsletter here www.patjeannedavis.com 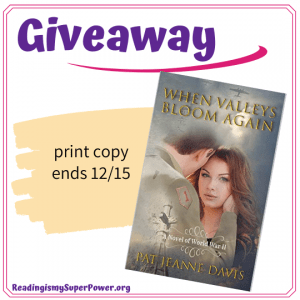 Pat Jeanne Davis is offering one of my readers a print copy of When Valleys Bloom Again! (US only) This giveaway is subject to Reading Is My SuperPower’s giveaway policies which can be found here. Enter via the Rafflecopter form below.


What about you? What interests you most about When Valleys Bloom Again and/or the excerpt Pat Jeanne Davis shared?

25 responses to “Book Excerpt (and a Giveaway!): When Valleys Bloom Again by Pat Jeanne Davis”