today’s book: it happened at christmas by christen krumm

Christmas is only NINE DAYS AWAY (ack!) according to Google, BUT now ’tis the season when I start craving cozy Christmas reads. (Okay – I crave them all year round but now’s when I can get away with talking about them LOL) This year I’m continuing my annual blog series spotlighting new and recently-released Christmas reads, and I’m super excited! Christmas books make me happy!

Today’s featured book is a YA twist on While You Were Sleeping + the author shares the story behind the story! 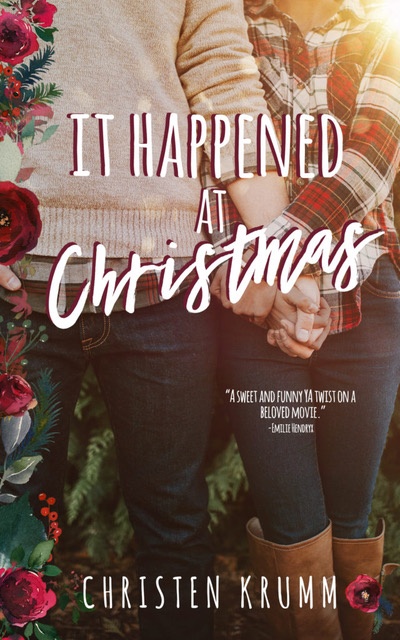 “A sweet and funny YA twist on a beloved movie.” —Emilie Hendryx

In this enchanting YA spin on While You Were Sleeping, Christen Krumm delivers laughter and Christmas sparkle through a swoon-worthy story of first love and belonging.

Life at Iverson Preparatory Boarding School isn’t easy when you’re basically the maid. Murphy Cain spends her days cleaning up after her upper class peers in exchange for tuition while dodging their cutting remarks. All of that changes when she rescues her crush, the popular and hunky Tripp Harrington, after a near-fatal accident and is mistaken as his girlfriend.

Murphy finds herself struggling with the choice to reveal the truth or play along. As Tripp’s girl, his wealthy family will offer Murphy something she’s been craving her whole life—a chance to be one of the “in” crowd. A chance to belong. Without it, she’ll be right back where she started.

It only gets worse as Tripp’s brother Hank enters the picture. He’s handsome, down to earth, and seems to understand Murphy better than anyone else. The only problem? She’s supposed to be dating his brother.

As Christmas break draws to a close, Murphy must decide if telling the truth is worth losing it all or if the risk will bring a greater reward in the end.

the story behind the story

by Christen Krumm, author of It Happened at Christmas

It Happened at Christmas was birthed from a love of all things 90s romcoms (Can we bring those back now? Please?) Growing up, my parents were fairly strict on what we could watch, so I cut my teeth on old Judy Garland/Gene Kelly films. In my teens, while I still loved the classics, I discovered romantic comedies. 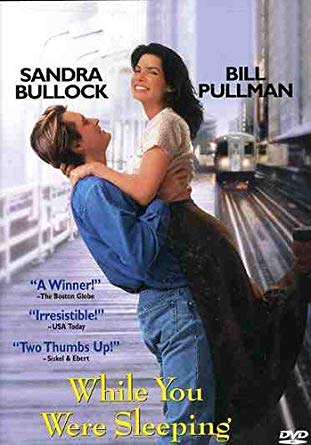 I’m not sure where I first saw While You Were Sleeping — if I had to guess, I would say it was at my aunt’s house who had cable and would record all the good movies (via the VCR — oh those were the days). When trying to come up with an idea for a piece of Christmas flash fiction, I started thinking back to my favorite Christmasy movies and While You Were Sleeping instantly popped into mind.

Yes, my plan for It Happened at Christmas was initially supposed to be piece of fiction 1000 words or less. I hit a wall with other projects (very decidedly not contemporary romance) and was needing something happy and fun to work on. But, as so often happens when I talk story, I started getting really excited about the story and it kept growing. When my critique partner would ask me questions about my characters and story, I’d be able to rattle of the answer with little thought. My critique partner kept telling me that she thought I finally found my genre — but I disagreed. I was just writing a short story (because obviously flash fiction wasn’t going to be enough).

By the time I hit 30k words, and I realized that I was only about halfway done, I finally admitted that maybe I had stumbled into my genre, and yes, I was loving it (I love how God puts those in your life to speak truth … even when you deny it for forever).

So, maybe I never set out to be a contemporary romance author (I really like killing off characters…), but I can say that I do love it and I’m excited to write more stories with a 90s romcom inspiration. 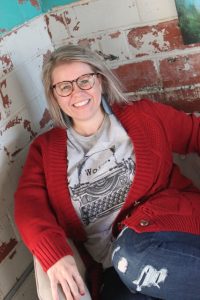 Christen Krumm is the author of It Happened at Christmas. She lives with her real-life superhero husband and three barefoot wildings in small-town Arkansas. Coffee is the lifeblood, books are her drugs, and creating stories is her favorite. Find her online at christenkrumm.com 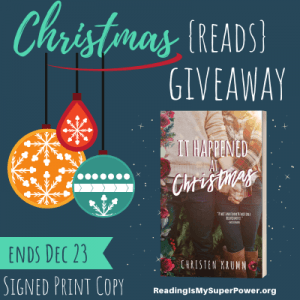 Christen Krumm is offering one of my readers a signed, print copy of It Happened at Christmas! (US only) This giveaway is subject to Reading Is My SuperPower’s giveaway policies which can be found here. Enter via the Rafflecopter form below.


What about you? What interests you most about It Happened at Christmas? What’s one of your fave 90s romcom movies?

26 responses to “It’s Beginning to Look A Lot Like Christmas (Reads) GIVEAWAY: It Happened at Christmas (+ guest post)”