Welcome to the Blog Tour & Giveaway for A Plan for Everything by Beverly Varnado & hosted by JustRead Publicity Tours!

Connie’s Coffee and Cones is thriving, and owner Connie Spencer is right on track to realize her dream of expanding into a catering business. She believes she owes her success to her remarkable ability to plan. In fact, she has a plan for everything. At least, she thought she did—until Michael Cole appears in Worthville.

Michael has an agenda of his own—and a competing business—that threatens to derail everything Connie hopes for professionally. And if that isn’t enough, Michael carries a secret that could cause a backlash for both of them. So, why does she find herself attracted to him? When an accident on a rain-slicked highway leaves Michael temporarily incapacitated, Connie is presented with a dilemma she never saw coming—helping the man she’s falling for, or moving ahead with her meticulous plans.

As life spirals out of her control and Connie faces losing everything, she questions whether her plans are enough. But if hers aren’t, whose are? As she searches for the answer, she learns she must come to terms with her deepest hurt in order to embrace a higher plan for her future.

Worthville, Georgia, the setting for my book, A Plan for Everything, and the predecessor, A Key to Everything, is more than just a backdrop for the story. This storybook village is as much a character in the books as the people. 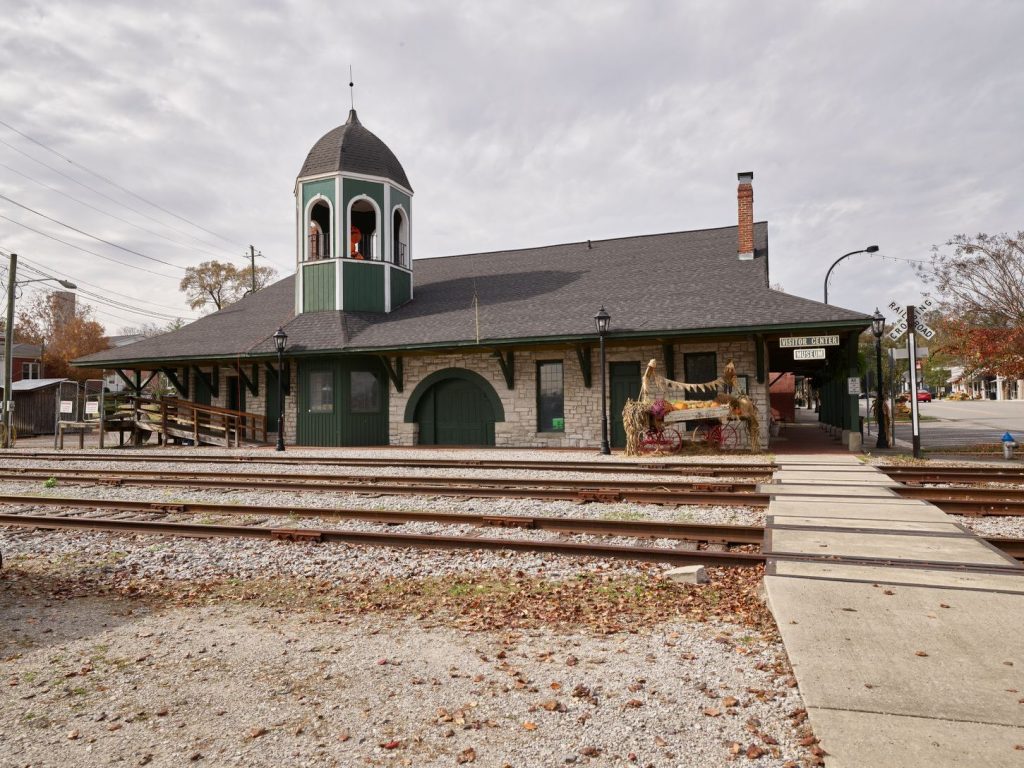 Worthville grew up around the railroad as many nineteenth century towns. In this case, the Georgia Railroad chugged through for more than a century. But changing times ended passenger and freight service there. Though the train no longer passes through Worthville, the restored depot is the center of most town celebrations. The Fall Fling, the Zinnia Festival, and the Fourth of July Celebration all use the depot as their hub. The Worthville Historical Society operates the depot as a sort of museum and art gallery often showcasing the work of local artists or featuring an interesting collection related to Worthville History.

Though Worthville went into decline toward the end of the twentieth century, a revival of sorts began in the early twenty-first as young families discovered the town’s quality of life was worth the short commute to jobs in nearby Perdue. About the same time, an alliterative naming frenzy hit new businesses coming into the area. 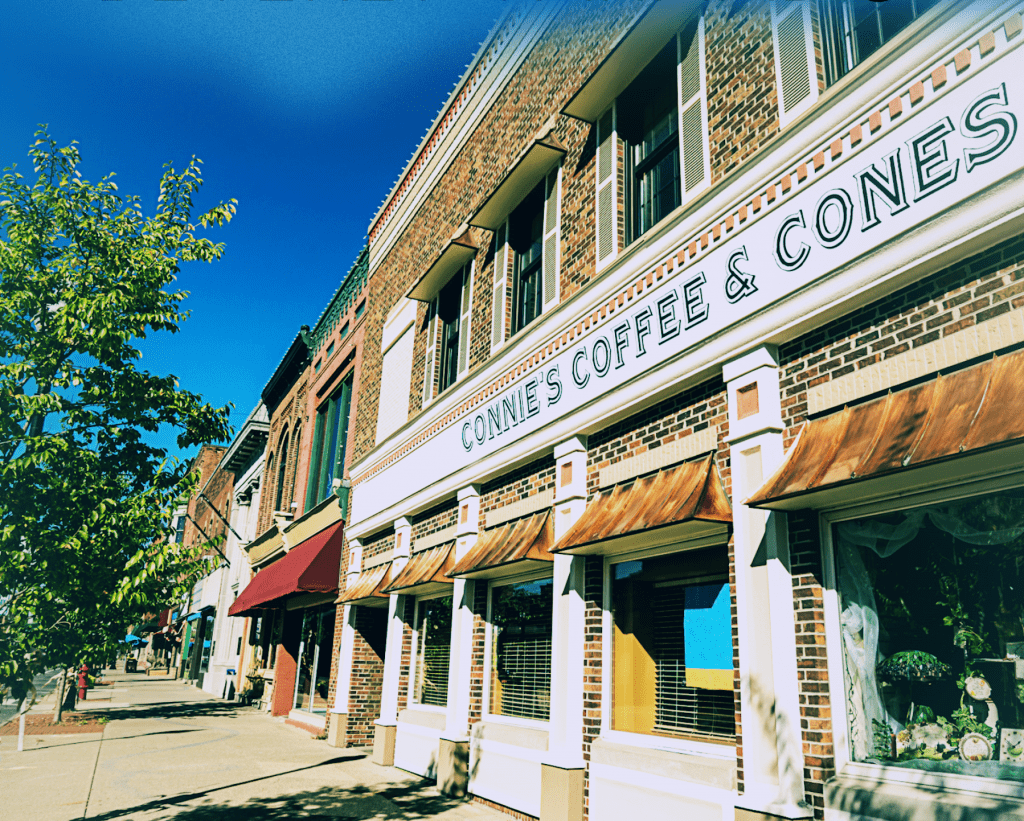 Among the shops on one side of Main Street, we find Connie’s Coffee and Cones where Connie is hard at work alongside Maria scooping cones for a class of first graders on a field trip from Worthville Elementary. Next door, Tucker at Tucker’s Tomes puts a new book from local author Eliza Harris in the window right next to the spinning light-up globe he uses as a display.  Mr. Gray from Gray’s Grocery is out front scratching the words “Fresh Artisan Bread” on a sandwich board. Clyde from Clyde’s Cleaners offers twenty percent off sweater cleaning according to a window sign. On the other side of the street, Harry’s Hardware boasts a couple of red wagons on the sidewalk. A meatball sandwich is the  special today at Della’s Deli as evidenced by the inviting aroma as you pass. If you keep walking, Ann’s Antiques and Vince’s Vintage are the go to places for home décor. On the corner, nobody makes better egg rolls than Chen does at Chen’s Chinese. Out on the highway, you’ll find another vintage store, Colleen’s Collectibles, as well as Arnold’s Apples and Auto Repair, where Arnold is both a talented mechanic as well as a master purveyor of fried apple pies. Colleen and Arnold are rumored to be dating.

Down the street, Worthville Church complete with bell tower, has seen generations of baptisms, weddings, and funerals, and continues to be a place of prayer and worship. It is the scene of one special wedding in A Plan for Everything.

The town council installed gaslights on Main Street to mimic ones in Worthville one hundred years earlier. When my protagonist, Connie Spencer, walks to work in the early morning flickering light, she feels the town is mostly hers. 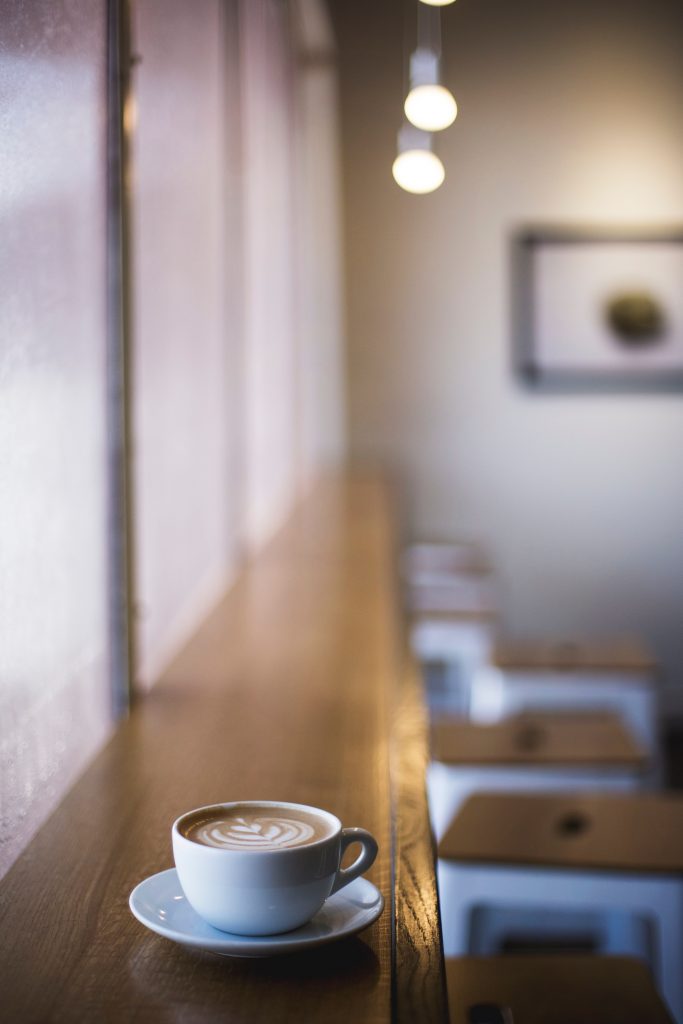 I hope readers who come to Worthville find a place they want to linger. I love that my publisher, Anaiah Press, has chosen to create a cover with Worthville’s Main Street. If you look closely, on the building closest, you can read Connie’s Coffee and Cones on the front. If you push open the door, you’ll find the scent of fresh brewed coffee and warm blueberry lemon muffins grabs your olfactory senses. You could order a latte’ and muffin then find a seat near the front window where you can people watch on Main Street. Then perhaps Connie will saunter over, tell you about her new ice cream flavors, and invite you to come back. Before you go, though, she’ll let you know how much she loves Worthville.

It is a sentiment I share, and I hope you, too, find Worthville a place you’ll want to return again and again.

Award-winning Southern writer, Beverly Varnado, is a novelist, screenwriter, and blogger who writes to give readers hope in the redemptive purposes of God.

She has written a nonfiction memoir as well as several novels and screenplays, one of which was a finalist for the prestigious Kairos Prize in Screenwriting. Her work is also included in several anthologies and periodicals. As an artist, her work was recently chosen for exhibit at a State University gallery.

She lives in Georgia with her husband, Jerry, and their chocolate Aussiedor who is outnumbered by several cats. Beverly is Mom to three children and Mimi to two grandchildren.

Read her weekly blog One Ringing Bell, peals of words on faith, living, writing, and art at oneringingbell.blogspot.com.

(1) winner will receive an A Plan for Everything inspired giveaway including a Jeremiah 29:11 planner, coffee mug, Starbucks coffee, and a $15 Amazon card!

Be sure to check out each stop on the tour for more chances to win. Full tour schedule shown below. Giveaway will begin at midnight January 23, 2020 and last through 11:59 PM EST on January 30, 2020. US only. Winner will be notified within 2 weeks of close of the giveaway and given 48 hours to respond or risk forfeiture of prize. Void where prohibited by law or logistics.

What about you? What interests you most about A Plan for Everything and/or the tour of Worthville that Beverly Varnado gave?

18 responses to “Guest Post (and a Giveaway!): Beverly Varnado & A Plan for Everything”