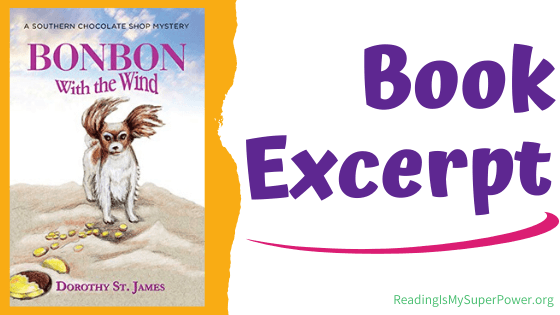 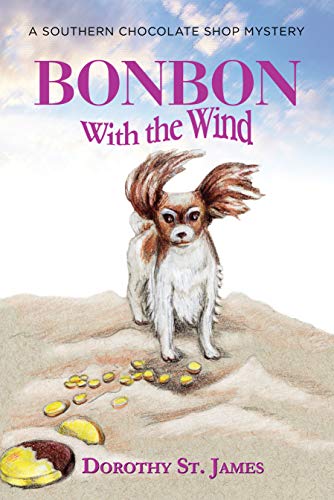 Join Penn and Stella on their latest adventure!

There’s a legend in the Sea Islands that before a hurricane hits the Gray Lady can be seen walking down the beach warning of doom. Penn doesn’t believe in such silly stories, but she does believe weather forecasters. A powerful hurricane is heading their way. Everyone on the island of Camellia Beach is busy boarding up windows and securing valuables to upper levels of buildings. Joe Davies, a local treasure hunter with an unquenchable sweet tooth, claims to have seen the Gray Lady walking toward him just that morning and is terrified for his life.

After the storm passes everyone returns to survey the damage. As Penn walks her little dog Stella on the beach, she finds Joe Davies’ body washed up onshore. Not only that, it looks as if an exploding transformer caused Joe’s seaside shack to burn to the ground. Did the Gray Lady claim another victim? Many on the island believe that is exactly what happened.

Penn is sure there’s another explanation. She follows the clues and hints of lost gold to discover that the truth behind the treasure hunter’s death is as much of a maze as the boating channels winding their way through the local marshes.

“Wait up!” Harley jogged to catch up to us as we made our way toward the beach. Not that we were walking that fast. Marion was weighed down with her equipment and had refused my offers to help carry something. And Police Chief Byrd rarely moved quickly. He once told me that a hasty police chief stirred an air of panic in the residents of the town. Above all things, he strove for calm and easy in his life.

“What’s going on?” Harley asked. His clothes were streaked with mud and wet sand. The cuff of his shorts had ripped since I’d last seen him.

“Are you OK?” I blurted, suddenly more concerned about what had happened to him than some dead body on the beach that wasn’t going anywhere. “Are you hurt? How’s the office?”

“Um…I’m fine. There was…some damage to the office. It’s going to have to be completely redecorated. Luckily all the files had been digitized and uploaded to an offsite server. So I suppose I didn’t lose anything important.”

I eyed him closely, trying to decide if he was more shaken up about the damage the hurricane did to his office than he was letting on. He’d taken over his father’s law practice after his father had passed away. The only change Harley had made to his father’s office, with its old wood paneled walls and furniture the color of faded avocados from the early nineteen sixties, was to purchase a computer. While money constraints might have kept him from updating and making the office his own, I suspected he’d treated the office like it was one of downtown Charleston’s famous historic sites—not changing a blasted thing—as a way of keeping his father’s memory alive.

I wanted to say something comforting. I wanted to let him know that he could count on me for any emotional support he might need. But when I opened my mouth none of that came out. Instead, I said, “The carpeting in there was older than the both of us combined.” And then I wanted to kick myself for sounding so uncaring.

Harley only chuckled. “It was a classic pattern. Don’t know I’ll be able to find anything quite that shade of brown with brown highlights to replace it.” His entire face brightened as he shook his head. So perhaps I’d said the right thing after all. “But enough about my office, what’s going on?”

“Dead body on the beach,” Byrd answered for me. “Your girlfriend found it.”

Harley tripped over his own feet. “Penn, really?”

“We haven’t been back in town for more than”—he checked his watch—“two hours, and you’re already stumbling across dead bodies?”

“It wasn’t on purpose. Besides, it wasn’t me. Stella found it.”

“You’re blaming the dog?” He scrubbed his hand over his face. “Whatever you do, don’t let Fletcher hear about it. He’ll declare it was a murder.”

“He won’t hear about it from me, but this is Camellia Beach. If he’s returned, there’s a good chance someone has already told him,” I said.

Fletcher was my newest employee. He had this unnatural interest in playing amateur detective. It was an interest that had nearly gotten him killed a few months ago.

Harley groaned. “That boy is looking for murders. He was wearing a Sherlock Holmes deerstalker hat the last time we saw him, for goodness sake.”

“It might be a murder,” I mumbled. Not quietly enough, apparently.

I felt for him. He was likely remembering the last murder on the island. He’d helped me track down the killer. Things had turned downright dangerous at the end. Matters between Harley and me had also turned steamy right before we’d confronted someone who had no moral qualms against killing anyone who had gotten in their way.

Like Fletcher, we’d also been lucky to escape with our lives.

“Don’t misunderstand me,” I said. “I hope it’s nothing. I hope I’m seeing dead bodies where none exist.”

We arrived where I’d found the suspicious-looking shirt. Perhaps I was wrong. Perhaps that stinky lump in the sand wasn’t a dead body. I grabbed Harley’s hand and held it tightly as both Byrd and Marion donned plastic gloves.

Marion produced a little whisk brush from her medical bag—not something I was expecting she’d have in there and then squatted next to the suspicious lump. With fast, efficient swipes she removed the top layer of sand from a small area. A moment later, Byrd cursed.

I leaned forward to see what had upset him.

What I saw wasn’t something I’d wanted to see. I quickly pressed my face to Harley’s chest, sandwiching Stella between me and her arch nemesis. She wiggled and growled low in her throat.

“I didn’t want to be right,” I choked as I tried to soothe my angry little dog. “Truly, I didn’t.”

“I know, Penn.” Harley rubbed his hand up and down my back.

Marion had uncovered from the sandy grave what was clearly a man’s hand. The action of her brush had dislodged something disc-shaped from his fingers.

“Is that a gold coin?” Harley asked.

“Looks like it,” Marion answered as she continued to clear away the sand.

“It’s an accidental death,” Harley whispered in my ear. “Someone stayed during the storm who shouldn’t have stayed. It’s tragic, but far more common than you might think.”

“I hope you’re right.” It didn’t feel like he was right.

The gold coin that had fallen from the dead man’s hand nagged at me. 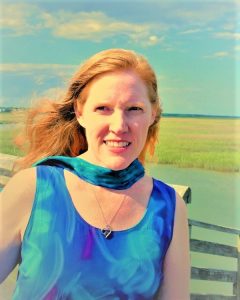 Dorothy St. James is the author of the White House Gardener mysteries. For the past twenty years she made her home on Folly Beach, an artsy island community in South Carolina with her sculptor husband. Dorothy is a member of Mystery Writers of America (MWA), Sisters in Crime (SiNC), and the International Thriller Writers (ITW). This is her fourth Southern Chocolate Shop mystery.

What about you? What interests you most about Bonbon With the Wind by Dorothy St. James?

16 responses to “Book Spotlight (and a Giveaway!): Bonbon With the Wind by Dorothy St. James”