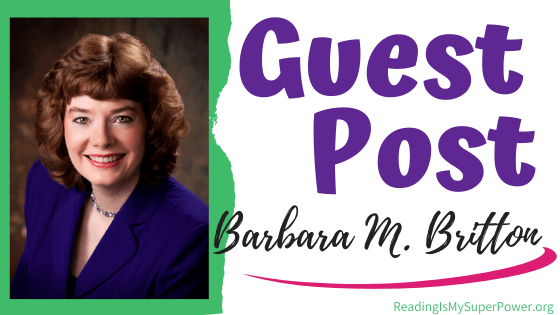 Please join me in welcoming Barbara M. Britton back to the blog today to share a playlist for her new Biblical fiction novel, Heavenly Lights: Noah’s Journey! 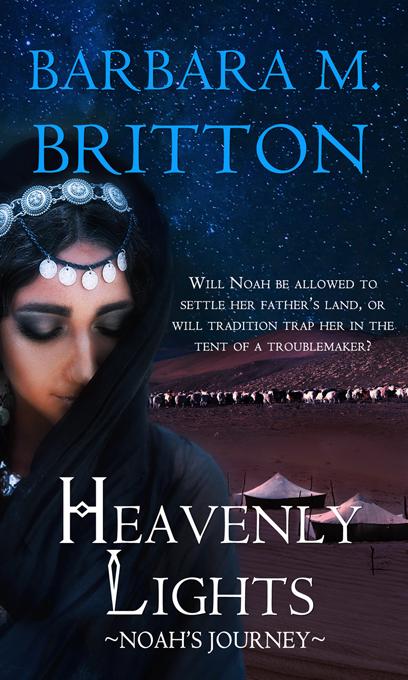 
Noah bat Zelophehad might have broken tradition by being able to inherit her father’s land, but her heart’s desire is to have the finest herds in all of Israel, something an orphaned and unmarried woman has never achieved.

Jeremiah ben Abishua cannot speak, nor hear. God has made his thoughts captive to his mind. But he can communicate with one shepherdess, a woman who sees his skill with animals and treats him like a man worthy of respect.

When their people disobey God and incur his wrath, Noah and Jeremiah must overcome tragedy in order to change perceptions in the tribes of Israel. Will their kinship desire to care for one another and the four-legged creatures God has placed in their care, be able to flourish in a land filled with enemies of the One True God?

God gave Noah bat Zelophehad four sisters, a way with four-legged creatures, and a strong spirit. She will need all three gifts to thrive in the Promised Land of God and find love with a special shepherd.

In one more week, the daughters of Zelophehad will travel further into the book of Joshua and further into God’s promised land. Who are the daughters of Zelophehad? They are five orphaned sisters who secured land rights for women. Noah will be at the forefront in this novel which tackles the fall of Jericho, Achan’s sin, battles for Ai, and a rededication of the people of Israel.

Yes, there is a female Noah in the Bible. So, what would my whip-toting shepherdess choose for a playlist?

All you 80’s ladies will remember “We Are Family” by Sister Sledge. Noah and her sisters went before Moses to ask for their land and now they continue to venture into a foreign land together. They even remind Joshua many years later about their land (Joshua 17:3-6). Noah can sing:

“We are family, I’ve got all my sisters with me.”

“Heavenly Lights: Noah’s Journey” opens with the fall of Jericho. Noah is in the fields with her flocks and herds. What happens to animals when the ground shakes? Noah will be singing with Carole King “I feel the earth move under my feet.”

Noah has been tending flocks for many years with the rugged, mute, and handsome Jeremiah. Since Jeremiah cannot hear or speak, Noah has created a sign language they can both understand. When Jeremiah is injured in the battle for Ai, Noah realizes that she cares for him more than she has let on. Her song now is “I Won’t Last A Day Without You” by the Carpenters.

Noah believes, “I can take all the madness the world has to give, but I won’t last a day without you.” Noah also has a strong faith in God and could sing this to Him, too.

As Jeremiah clings to life, Noah sings to God a song by MercyMe, “Even If.” She feels “Right now I’m losing bad.” But she also believes the future belongs to God. “My hope is You alone.”

I won’t do any spoiler alerts, but Noah and her sisters have a strong faith in God. After all, they went before an assembly of men to ask for something that had never been granted before…inheritance rights for girls.

Noah’s theme song, and one for all the daughters of Zelophehad (Mahlah, Hoglah, Milcah, and Tirzah, too) comes from Jeremy Camp. “Walk by Faith” says: “Well, I will walk by faith, even when I cannot see.” The girls didn’t know if their request for land would be honored, but God said, “They’re right!”

I hope you enjoy my second novel with the daughters of Zelophehad as they brave new challenges and new territory.

The title for “Heavenly Lights” comes from James 1:17:

“Every good and perfect gift is from above, coming down from the Father of the heavenly lights, who does not change like shifting shadows.”

A perfect verse for brave, faith-filled girls. Even one named Noah. 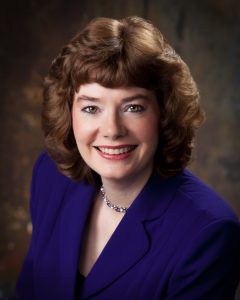 Barbara M. Britton lives in Southeast Wisconsin and loves the snow—when it accumulates under three inches. She is published in Biblical fiction and enjoys bringing little-known Bible characters to light in her stories. Barb is a member of the American Christian Fiction Writers, the Society of Children’s Book Writers and Illustrators, Romance Writers of America and Wisconsin Romance Writers of America. Barb has a nutrition degree from Baylor University but loves to dip healthy strawberries in chocolate. 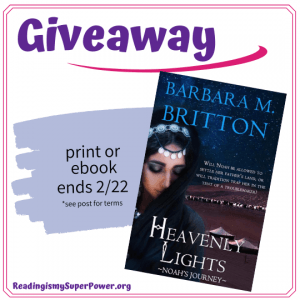 Barbara M. Britton is offering a copy of Heavenly Lights: Noah’s Journey to one of my readers! (print or ebook, print is open to US only; ebook is open internationally) Void where prohibited by law or logistics. This giveaway is subject to Reading Is My SuperPower’s giveaway policies which can be found here. Enter via the Rafflecopter form below.


What about you? What interests you most about Heavenly Lights: Noah’s Journey? Which of the songs that author Barbara Britton mentioned have you heard / do you already love?