Welcome to the Blog Tour & Giveaway for The Sheriff’s Second Chance by Tanya Agler, hosted by JustRead Publicity Tours!

Broken things can’t be fixed…
Or can they?

Officer and single dad Mike Harrison doesn’t believe in second chances. Ever. That is, until he learns that his former best friend—gorgeous green-eyed car mechanic Georgie Bennett—is back in town. Unfortunately, she’s also a suspect in a recent break-in! But it’ll take an old classic car to show Mike and Georgie that almost anything can be restored with a little patience…and a whole lot of love.

What’s on their grocery lists?

by Tanya Agler, author of The Sheriff’s Second Chance

Thank you so much for having me on your blog today. A character’s grocery list is such a fun way to get to know the characters in a little more detail.

In The Sheriff’s Second Chance, mechanic Georgie Bennett has moved back to Hollydale after living in different parts of the country. Her mother has recently had a stent procedure, and her mentor mechanic asked her to run his garage while he visits his sister. Along the way, Georgie finds herself temporary guardian of big, lovable Beau the dog. So her grocery list might look somewhat like this: 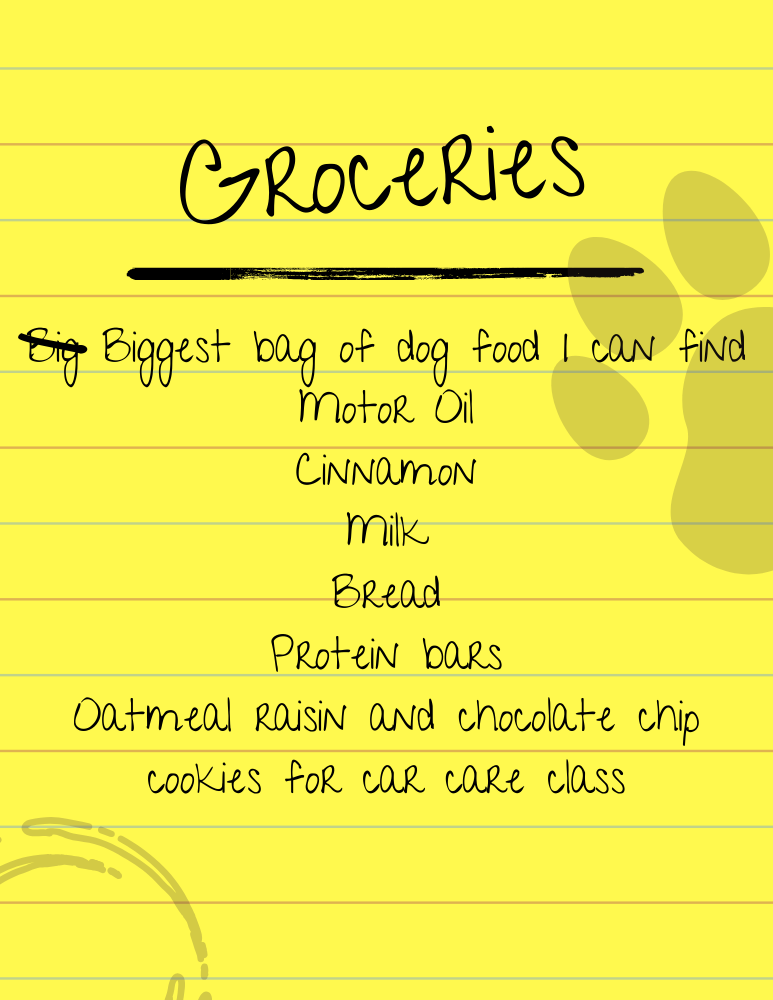 The hero, Mike Harrison, is raising his eight-year-old daughter, Rachel, and often finds himself at his mother’s house borrowing milk and whatever else is in her pantry when he’s forgotten to go to the store. His grocery list would be a little longer but would include the following and would include additions on the bottom from Rachel (I didn’t have the heart to correct Rachel’s spelling): 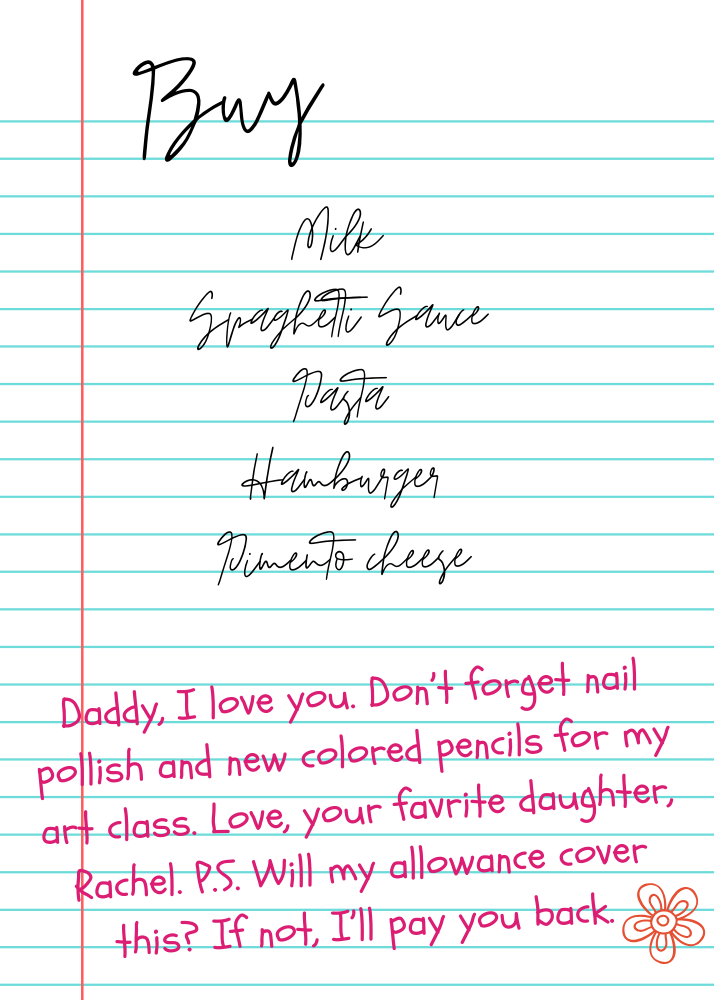 In The Sheriff’s Second Chance, Georgie comes down to breakfast one morning only to discover her mother remembers and has made her favorite, French Toast. There’s also a scene where Mike heads to the refrigerator only to find he needs to stop at the grocery store but has the ingredients to make his standby, spaghetti. Throughout the book, food pops up in almost each scene from Heidi’s peach muffins to Miss Joanne’s chicken noodle soup to Mike’s birthday cake. Hollydale residents love good meals, and Hollydale itself is a place where second chances and hope can come together even when something broken and run down seems destined for the junkyard. Broken things can be fixed with a little bit of hard work and a lot of love. Thanks for hosting me today and I’m including Heidi’s Peach Muffin recipe from my home to yours.

An award-winning author, Tanya Agler moved often during her childhood and settled in Georgia where she writes sweet contemporary romance novels, which feature small towns, family and pets, and themes of second chances and hope. Her debut, The Sheriff’s Second Chance, is a January of 2020 Harlequin Heartwarming release. A graduate of the University of Georgia with degrees in journalism and law, she lives with her wonderful husband, their four children, and a lovable Basset, who really rules the roost. Represented by Dawn Dowdle and the Blue Ridge Literary Agency, she’s currently at work on the sequels to her debut. When she’s not writing, Tanya loves classic movies, walking, and a good cup of tea.

(1) winner will receive a print copy of The Sheriff’s Second Chance, swag, and a bookmark!

Be sure to check out each stop on the tour for more chances to win. Full tour schedule shown below. Giveaway will begin at midnight February 18, 2020 and last through 11:59 PM EST on February 25, 2020. Winner will be notified within 2 weeks of close of the giveaway and given 48 hours to respond or risk forfeiture of prize. US only. Ebook prize available to Canada. Void where prohibited by law or logistics.

What about you? What interests you most The Sheriff’s Second Chance? Which grocery list that Tanya Agler shared would look most like yours?

12 responses to “Guest Post (and a Giveaway!): Tanya Agler & The Sheriff’s Second Chance”