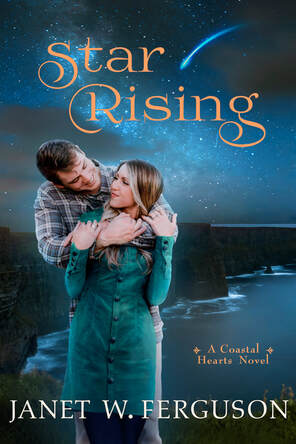 Star Youngblood has always been a fighter-a necessity after her mother married a monster of a man. Now, she’s finally on the path to the stable life she’s always wanted. Her employer, Priscilla Kelly, is a sweet woman ravaged by rheumatoid arthritis, and Star will do anything to help her. Even if that means going toe to toe with Mrs. Kelly’s neglectful son.

After being betrayed on the mission field and devastated by the tragic death of his father, Paul Kelly gave up on God. He lives life on his own terms, biding his time as a corporate pilot until he can save enough money to begin his own flight school closer to home. His mother is all he has left, and he wants to be near her. He just didn’t expect her health to decline so quickly. When he discovers his mother has taken in a stray–a woman he’s not at all sure can be trusted–his protective instincts kick into high gear. Paul’s handled a lot of turbulence, but he’s never gone up against a force like Star.

As Paul and Star strive to protect his mother in their own ways, they soon find their hearts are at the greatest risk.

Paul nudged her chin to examine her face. No marks or bruises that he could tell. He took her hands. Her knuckles were red. They’d likely bruise and swell. The girl was a fighter. And he hated to think of how she’d had to learn to be one from childhood. It wasn’t fair.

Her sweater and jeans covered her body, leaving him no clue as to injuries there. “What about your shoulder? The rest of you?”

“I’m fine. Really.” At last, her gaze met his, her eyes glassy and red. “Can we sit out back on the patio of the hotel for a while? I need to decompress before I see your mom. Get my head together.”

“Sure. Can I get you some water…tea…anything?” Would the vicious attack reopen the wounds from her past—drive her to want a drink? Or use something else? If he were in her place, he’d probably like a few shots of tequila.

“No.” Her voice was a whisper.

They walked through the lobby and out the French doors to the patio. Alone in the cool night air, they sat on a bench, staring out at the bay. Moonlight illuminated the waves that gently crested against the shore. A million pricks of light dotted the sky and shone over the faint outline of green hills.

But only one Star captured his attention.

Though one may be overpowered, two can defend themselves. A cord of three strands is not quickly broken.

Another verse. But not quite as annoying as the ones before. Again, Paul reached for Star’s hand and covered it with his own. “You deserve better—you deserve someone to watch over you, to treasure you. Someone to make sure no one ever hurts you again.”

She turned and gazed up at him, eyes shining. “No one can promise that. But having someone to go through the bad times with is—”

“I’d like to try.” He cupped her cheek. “Maybe you and I could spend time together. Back home. Figure out where to go and what to do next. Together.”

A tiny lift of her lips drew him closer.

“What do you think?” His voice came out husky.

“You might?” Only inches away now, and the magnetic pull of her mouth was more than he could fight. His lips brushed hers, softness and sweetness filling his senses.

She responded with intensity, roaming, exploring, and deepening the kiss. Warmth flooded him. And a fierce longing. A longing to hold and protect. To show her a different kind of life than the one she’d known. To show her how a good man could treat her.

Which probably started by showing her respect. Despite the fires raging within him and urging him on, he relinquished her lips.

Expelling a long breath, he rested his forehead against hers. “That was everything I’d hoped for and more.”

The tinkle of laughter came from Star. “We’ve come a long way, haven’t we, Perky?”

The wind swirled between them, ruffling her hair and heightening his already spiking senses. “You speak the unvarnished truth, Princess Shining Star. As usual.”

He pressed another kiss to her forehead, lingering, savoring the soft feel of her skin, the intoxicating scent of her hair. This woman—beautiful in any light, shone a light all her own. 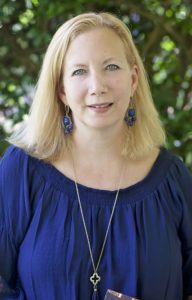 Janet W. Ferguson is a Grace Award winner and a Christy Award finalist. She grew up in Mississippi and received a degree in Banking and Finance from the University of Mississippi. She has served as a children’s minister and a church youth volunteer. An avid reader, she worked as a librarian at a large public high school. She writes humorous inspirational fiction for people with real lives and real problems. Janet and her husband have two grown children, one really smart dog, and a few cats that allow them to share the space. 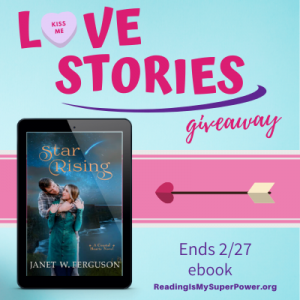 Janet Ferguson is offering an ebook copy of Star Rising to one of my readers! (Open internationally. Void where prohibited by law or logistics.) This giveaway is subject to Reading Is My SuperPower’s giveaway policies which can be found here. Enter via the Rafflecopter form below.


What about you? What interests you most about Star Rising by Janet Ferguson?